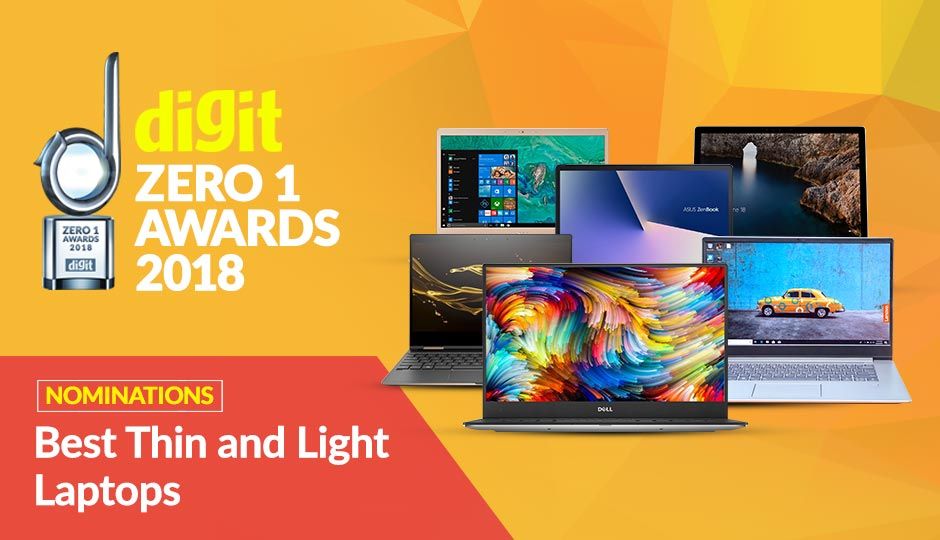 It’s that time of the year again when we, at Digit, present our prestigious Zero1 awards to devices that displayed unparalleled performance and wowed us the most. This year, we’re focussing on Thin and Light laptops, a category that’s progressively gaining popularity amongst buyers. Lenovo, for one, has focussed its efforts on making its machines thinner and lighter, which is visible in its new IdeaPads for this year. Here are our nominees for the Thin and Light laptop category:

Acer updated its 14-inch Swift 5 in August this year by outfitting it with an eighth-generation Intel Core i5 CPU, 8GB of LPDDR3 RAM, and a 256GB SATA-based solid-state drive. Graphics is taken care of by an Intel UHD Graphics 620 integrated GPU. What’s special about the Swift 5 is that it’s one of the lightest laptops out there. It weighs approximately 970g, which is far less than all the other laptops in this performance-based shootout. Can it bag a Zero1 award though? That remains to be seen. Click here to buy.

The Asus ZenBook S is the quintessential Thin and Light in that it’s 1.29 centimetres slim (that’s slimmer than the original MacBook Air by half a centimetre, mind you) and 1.05 kilogrammes light. It ditches all conventional ports to offer just three USB-Cs (Thunderbolt 3 included of course) and a 3.5mm audio jack. What it lacks in port availability it makes up for in under-the-hood specs: it’s got an eighth-generation Intel Core i7 CPU, 16GB of RAM, and a 512GB NVMe solid-state drive. Sadly, it has no dedicated graphics card. Still, let’s see if it will come out as this year’s winner of the Digit Zero1 award. Click here to buy.

The Dell XPS 13 was launched in 2012 and has only been getting thinner and lighter every year since. The 2018 model is 1.16 centimetres thick and 1.2 kilogrammes light. Its 13.3-inch 4K display burns bright at over 500 LUX. On the inside it features an eighth-generation Intel Core i7 CPU, 16GB of RAM, and a 512GB PCIe-based solid-state drive. Graphics, sadly, is handled by an Intel UHD Graphics 620 internal GPU. All this points to a promising fight for the Digit Zero1 award but only time will tell if it manages to bag one. Click here to buy.

The famous razor-sharp HP Spectre x360 has been updated with an eighth-generation Intel Core i7 CPU, up to 16GB of RAM, and up to 512GB of storage on a PCIe-based solid-state drive. The laptop sports a 13.3-inch touchscreen display and an integrated Intel GPU for graphics. It weighs 1.26 kilogrammes. Its specs look sharp but will they translate to blazing performance on our scoring charts to win a Digit Zero1 award? We’ll find out soon enough. Click here to buy.

The Lenovo IdeaPad 530S is, in a manner of speaking, a mainstream laptop in a Thin and Light laptop’s clothes. It ticks all the right boxes when it comes to performance. On the inside it’s got an eighth-generation Intel Core i5 CPU, 8GB of RAM, 512GB of storage on its NVMe SSD, and an NVIDIA GeForce MX150 GPU with 2GB of GDDR5 video RAM. The body uses a clean all-aluminium construction and is 16.4mm slim. It weighs 1.49 kilogrammes, making it just about duck under the cut-off weight for Thin and Lights. All put together, user experience is a hoot on the IdeaPad 530S but the questions remains: does it have enough to bag this year’s Digit Zero1 award? We’ll just have to wait and watch. Click here to buy.

Yes, yes, the Surface Laptop is technically last year’s model but it went on sale only this year in India, making it eligible for the Zero1 nominations. Inside its clean, slate-like body it packs a seventh-generation Intel Core i5 CPU, up to 16GB of RAM, and up to 512GB of solid-state storage. There’s no dedicated graphics card on-board, which could knock some points off for it. Will the Surface Laptop bag the Digit Zero1 award though? We’ll just have to wait and find out.