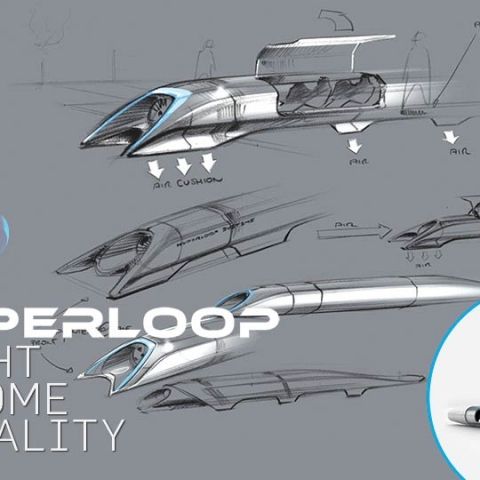 Although warp speed is the ultimate dream, it is best left to outer space where it would be practical. On Earth, however, we need a faster and cheaper mode of travel. Lets face it: roadways just don’t figure in this discussion, railways are slow, planes are expensive (and limited because of needing space and infrastructure), and newer transport modes such as maglev have their own limitations. We’re in the golden age of quantum physics, smashing atoms together and uncovering the secrets of the universe, but we still can’t get from A to B as easily as we should. 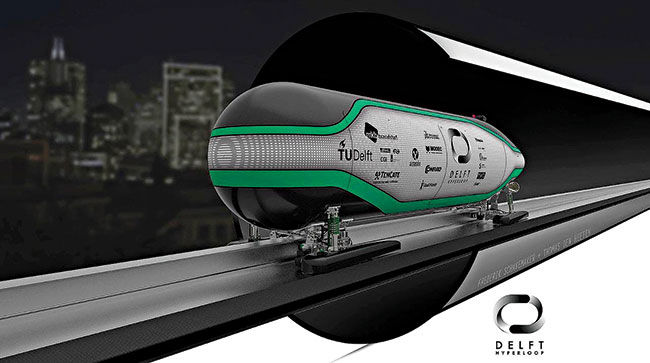 Faster than 1000 kmp inside a vacuum tube!

Like Maglev, the hyperloop system also uses electromagnetic propulsion, but while maglev uses electromagnetic propulsion for both thrust and levitation, the hyperloop system’s pods float on a cushion of air, at least as originally envisioned. The pods run in enclosed tubes in a partial vacuum. They are highly energy efficient and are a carbon-free mode of transport. Their design is small in order to enable on-demand runs, thus minimising energy wastage. They can depart in mere 10 seconds intervals, and the system is not limited to terrain. It can run along the surface of land, through tunnels and even underwater. Think of the transport tubes in the Jetsons and Futurama! 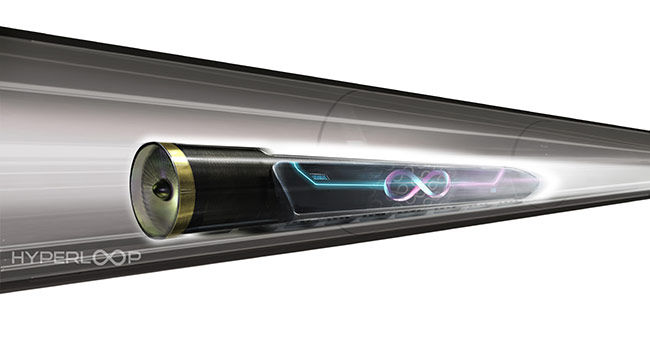 The background to the renewed interest in developing hyperloop technology is rather interesting. Elon Musk, the CEO of Tesla Motors and SpaceX was disillusioned with the idea of the California high speed rail projects and was disappointed when it was approved. His complaint was that it was an expensive project (in terms of cost per mile) and that it wasn’t fast enough. Although he liked the idea of having a statewide mass transit system, but only if it was cheaper, safer and faster than existing forms of travel. He felt that if there was heavy investment in a transport project, then the benefits should be equally massive. He wanted the fifth mode of transport to be revolutionary. Let’s take a look at some of the projects being worked on across the globe.

Even though Elon Musk came out with the paper, his company won’t be developing the technology. Space X held a competition for various teams comprising students and engineers to come up with design ideas for the pod. The pod designs will be evaluated by Space X engineers and the finalists will test their pods on Space X’s test track in Hawthorne, California. In order to build this test track, Space X has partnered with Aesom, a company that provides technical project support and has been involved in many high-profile engineering projects. The competition saw more than a 100 prototype designs being submitted, and 22 teams made it through, and will now get a chance to test their prototype on Space X’s test track in June 2016.

A team of students from Massachusetts Institute of Technology (MIT) won the Best Overall Design. Their pod is innovative and lightweight. Instead of air jets for levitation, it uses two arrays of neodymium magnets to do the same, and additional ones to keep it stable as it zips through the tube at hundreds of kilometres per hour. Safety has also been addressed in MIT’s design which comes with a fail-safe braking system. The design currently lacks in internal space for transportation of people and goods, which is supposed to be the primary purpose of the hyperloop technology. However, the MIT team has until June 2016 to make changes to their design, before the track tests commence. 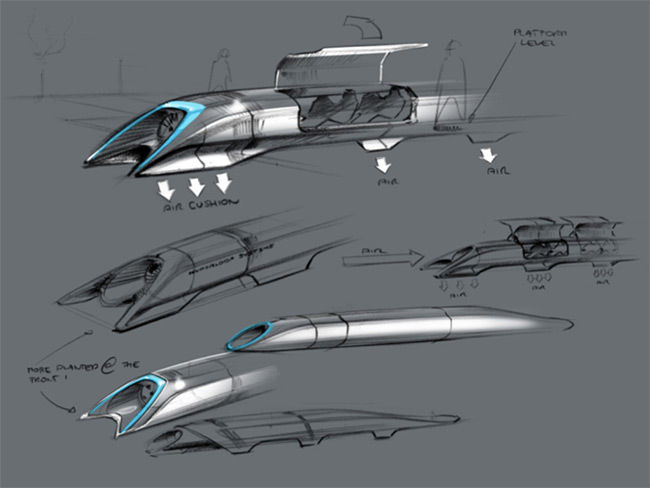 A sketch of the Hyperloop from Elon Musk's original 2013 paper.

The Delft University of Technology from the Netherlands were the runners-up in the competition. Their hyperloop pod will be made of carbon fibre which will give it a lighter weight, thus enabling them to use a smaller engine. The Delft University is known for their solar car racing team, which has a record of winning most of the solar race championships.

The Top 5 student teams for the design and build category were: 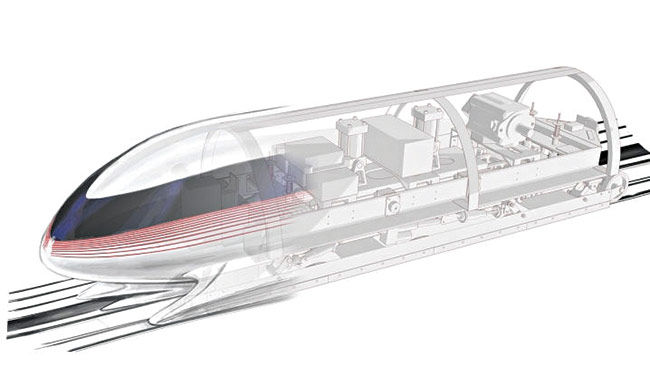 A team of MIT students won the competition to design a pod for the futuristic transportation system.

Hyperloop Transportation Technologies (HTT) is a crowdsourced engineering project. While the name may be quite a mouthful, this startup means business. Around a hundred engineers have come together in Hyperloop Transportation Technologies (HTT) to work on the hyperloop technology. They collaborate with each other by crowdsourcing through weekly teleconferences. HTT is working smartly and has recently partnered with Oerlikon Leybold Vacuum, a company which specialises in vacuum technology, and also with Aesom, a company with which Space X is already in a collaboration with. In January 2016, HTT applied for a permit to begin construction of a test track in Quay Valley, California.

The hyperloop isn’t limited to only land-based transport 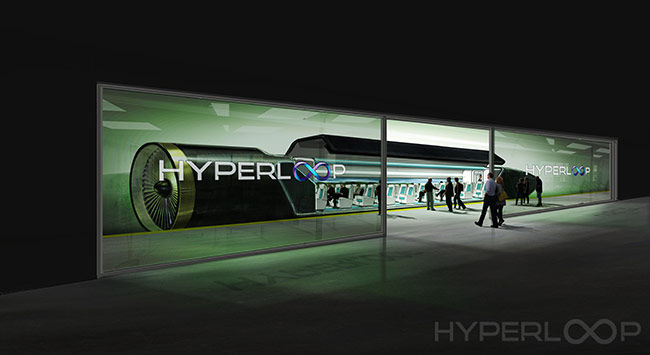 A future hyperloop loading area where you board a pod?

The other startup in the development of the fifth mode of transport is Hyperloop Technologies. They created quite a flutter when, in December 2015, they announced that they would be conducting an open air propulsion test, north of Las Vegas. While this test was itself an important landmark, the point of even greater significance here was that it was done with the Nevada Government’s backing. This is quite significant as they have a vast resource and, in the past, government backing has resulted in a lot of technologies that we use in our everyday lives – the touchscreen tech used in phones is an example of technology research that was funded by American ad European governments.

HT’s Blade Runner test rig allows testing in speeds ranging from subsonic thru supersonic, and is powered by two 2,000 CFM (Cubic Feet per Minute) Vacuum pumps – the speed at which it can remove air from the system. The rotor in its levitation rig achieves surface speeds in excess of 300 m/s.
The head of the system, the command centre, called The Tube Lab is a fully equipped mobile command centre built into a cargo container cargo, it comes with equipment to collect hardware data and process in into useful information used for further development of the system. 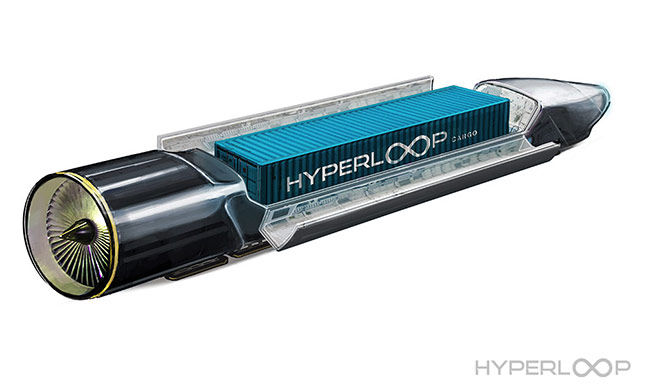 The most obvious advantage is faster travel, because when you travel at faster than 1000 kmph, you’re basically travelling much faster than subsonic aircraft can travel. The supersonic Concorde may have travelled at over 2,000 kmph, but it was just bad economics per person. The second biggest advantage is cost. Today, you pay ridiculous amounts to travel long distances. The cost of travel is directly proportional to the distance and speed at which you want to travel. Estimates of the costs of hyperloop travel work out to about $20 for a one-way 350-mile (600 km) journey. That’s the distance of Goa to Bengaluru, or Pune to Hyderabad, or New Delhi to Jodhpur, in just 35 minutes, and costing only Rs 1,350! That’s just a little more expensive than what we would pay for an AC bus ticket, except that the bus would take over 12 hours! That’s not all, since hyperloop pods are contained in partial-vacuum tubes, travelling at high speeds, they’re completely isolated and never affected by bad weather.

Since the system is powered by electricity produced by solar panels mounted on the tube itself, the hyperloop can actually give back to the grid, and certainly won’t be affected by power failures of the grid – a huge boon in a place like India.

Obviously, security is a major concern. Terror attacks target systems like this one, and it would be easy to find and attack a weak spot in a 600 km vacuum tube. There are high costs involved in the beginning. It’s estimated that a 600 km line would cost about $7.5 billion (Rs 51,500 crore). Although Space X has calculated that, if done right, private industries owning a hyperloop implementation could earn as much as 300 million USD a year! However, this is more likely to be a government-backed initiative.

A really big drawback is the fact that the current designs have amounted in really claustrophobic cabins. Although toilets may not really be required for a 30-minute journey, there might be a need for a few only because of the sickness passengers might feel when being locked in a small metal tube. If an accident were to occur, there is no doubt it will be spectacular – there are vacuums and hollow tubes being shot at another city at over 1000+ kmph, and even the failure of a single system will result in catastrophe. Whatever the case, we need to seriously consider any tech that will make the world a smaller place by letting us travel further and faster than ever before. Write in and let us know your thoughts on this...

Google Meet ends free trial, will now be limited to a 60-minute time limit for group calls
Amazon Appstore Spotted On Microsoft Store But There’s A Catch
Vibrations from a motorcycle engine can damage your iPhone cameras
Apple Mac Mini M1X could debut in November with a powerful 32-Core GPU
'Realme Pad' tablet tipped to come with a 10.4-inch AMOLED panel and 7,100 mAh battery
Advertisements