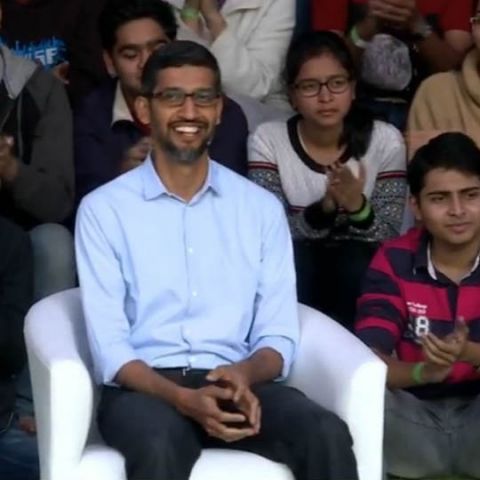 Google CEO Sundar Pichai visited his old college campus at IIT Kharagpur. Pichai received a warm welcome from students and and faculty members at the Engineering institute. Also present at the event was Google VP & MD (South East Asia), Rajan Anandan. The event titled ‘Back On Campus’ was opened by Anandan addressing students and aspiring technologists at IIT KGP. “Google and IIT have had a long history. Many of our top performing engineers come from IITs.  KGP students have been top contributors to Google’s Summer of Code. IIT KGP’s PHD students and faculty members are working on many world class Machine Learning projects. You gave us our favourite CEO. In 10 or 20 years one of you will be sitting on this chair,” said Anandan in his opening remarks.

Hitesh Oberoi, MD & CEO of Info Edge hosted a fireside chat with Pichai. Info Edge is the company that owns online domains like Naukri.com, Jeevansathi and is even a majority stake holder in the online food discovery service Zomato. During the chat, Pichai addressed a number of topics ranging from his college days to how Google is advancing in the fields of Machine Learning and Artificial Intelligence. “It’s been phenomenal to come back. It was an amazing 4 years at IIT KGP and It is extremely nostalgic,” said Pichai.

Talking about Google’s strengthened focus on Machine Learning and Artificial Intelligence, Pichai highlighted how advances in deep learning algorithms are a core part of what Google has in store for the future. “We recently launched Google Translate. Using deep learning the translations have improved immensely. We are definitely at a point of inflection and we are investing heavily as a company in this (machine learning and AI),” commented Pichai.  Pichai also highlighted Google’s recently published paper on how Machine Learning can be used to detect Diabetic retinopathy, a condition which damages the retina due to diabetes. “We can detect it very accurately. This is an early example of the kind of changes that will happen with machine learning,” said the Google CEO. 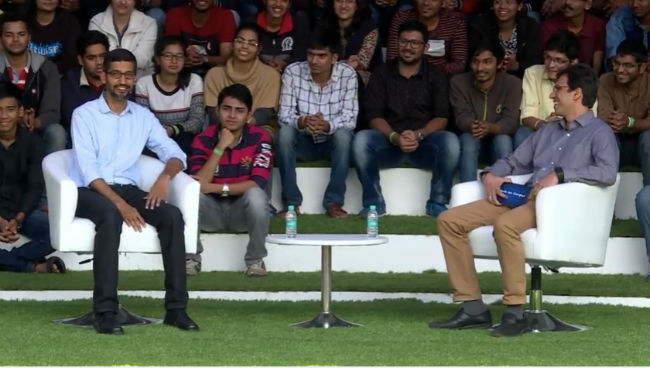 Speaking on the country’s startup ecosystem, Pichai encouraged Indian entrepreneurs to think of products that would work for the global population and not just Indians. “They need to set their sights bigger,” he said, adding that the trend lines are strongly in favour of Indian startups. He also expects big global software companies emerging out of the country in a few years.

Being at IIT KGP, Pichai also shared his thoughts on India’s education system. Voicing his thoughts on the same, Pichai said, “Education needs to evolve. A lot of emphasis is given to spending time on books. Working in the real world it is important to be well rounded. I would encourage people to follow their passions a little more. Important to get real world experience. I would like to see people value creativity, value experience of doing things. It’s remarkable to be at IIT but It is also important to remember that getting into an elite institution does not guarantee success.”

Answering a student’s question on Google’s involvement in India’s Digital growth, Pichai said that India is core to Google’s mission statement. The company is currently focussing its strengths on trying to bring Google products to India in as many languages as possible. He also stressed on the need for cheaper smartphones in India, and said that entry level phones should cost as low as $30 (Rs. 2035) in India. A hint about a budget Google phone perhaps? Further, Pichai added that Google is always open to future partnerships with the Indian government, and cited the company’s ongoing collaboration on projects such as Internet Saathi, Railtel WiFi and their most recent foray with FICCI to impart online training to Indian SMBs. 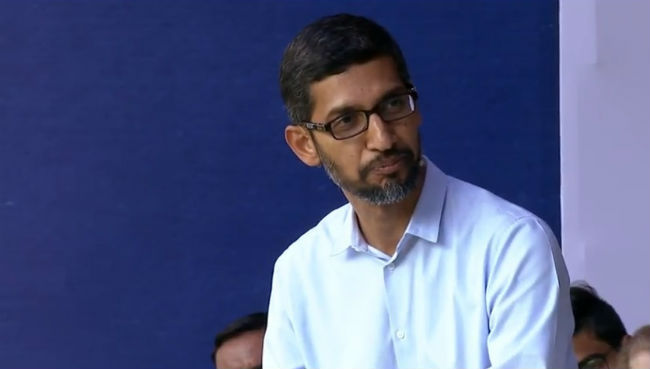 Pichai believes India can take on China in digital growth and that the country is set to be a global player in the digital economy. “There is a timing issue. It will take a few more years.” he said.

On a closing note, Pichai narrated his experience of giving his first interview at Google. His interview was held on April Fool’s Day, which is also when Gmail was announced. Putting the two together, Pichai initially believed that Gmail was a April Fool’s joke. Little did he know at the time that he would be the global CEO of the very company that gave us Gmail.

46% of businesses in India have seen an increase in fraud during the pandemic: Experian Global Insights Report
Google Search now has dark mode on desktop and here's how to activiate it
How to look good on Google Meet with Green Room feature
Realme Pad design and display teased ahead of September 9 launch in India
How to book Covid 19 vaccination slot on Google search, assistant and maps
Advertisements