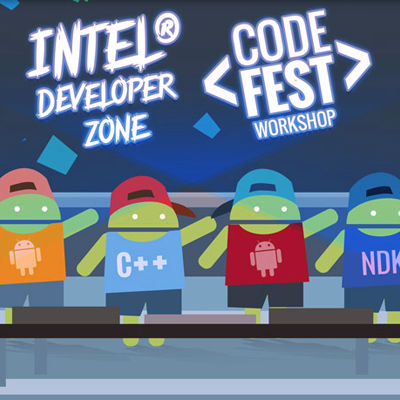 Competing for and winning the first place title at the Intel Android Codefest in 2013 was an amazing experience. Prior to the Codefest, we had attended quite a few hackathons and game jams in New York City. I was quickly familiarized with what was possible for a small team of developers and designers to get done in a short amount of time. These events became an important testing bed for polishing my skills, exploring concepts, and acquiring business partners and opportunities. When I heard about the Intel Android Codefest, I was keen to team up with developer Daniel Rings. A month earlier, I met Daniel at Hack’n Jill. Our team went on to win 2nd place at that hackathon, and we were ready to try out our luck again.

For Codefest, we signed up for the hackathon portion of the competition (there was also a porting event). We were tasked with developing a mobile app utilizing the Intel® XDK. Aside from that, there were very few restrictions and the judging criteria was clearly stated. Food and drink was also provided. When you step back and think about how awesome that is, you can’t help but attend these exciting events.

The game we created is called Hammerfield. Hammerfield is a physics-based game where you are tasked with defending the International Space Station from incoming asteroids. You do this by swinging a space hammer that is connected to your spaceship via revolute joints- in essence, it is a ball and chain. Guiding the space hammer to collide with asteroids was a rather cathartic experience. I had been meaning to implement the mechanic for some time, but I hadn’t decided on the theme of the game. Daniel had just met famous astronaut Chris Hadfield, and we drew inspiration from that!

Hammerfield was built in Construct 2, a powerful HTML5 game engine that conveniently had an official plugin for Intel XDK. While Construct 2 is an incredibly versatile game engine that has been used by developers to make several polished games, it doesn’t require any programming knowledge to make simple projects. This can get frustrating for a programmer, but Construct 2 becomes an incredibly potent way to quickly prototype smaller projects. It also serves as a bridge between designer and programmer, which allowed me to transcend the level of mute rubber duck. The Construct 2 to Intel XDK process was seamless. On top of the ability to take full advantage of Intel's hardware, XDK came with an easy-to-use emulation environment. Contrary to most of our experience with Android emulators, Intel XDK's were fast and even included accelerometer inputs and gyroscopes.  One of the more difficult - and more rewarding parts of the development process was making the asteroids. The asteroids needed to appear randomly, spin randomly, and start at random speeds. Daniel also programmed “atmospheric entry” burning onto the asteroids as they flew past the space station into the Earth's Atmosphere, which ended up looking quite cool. Construct 2 provided extremely fast prototyping behavior which was a huge help in this project.

One of our worries for the game was having performance issues as a result of the dozens of physical objects on screen at once. When we tested it via browser (HTML5), there were some minor frame rate hiccups that we rectified with better design. The surprising part for me was that when we ran it through the Intel XDK emulator- the game performed very well! Testing it directly on our Android Devices was also a breeze, thanks to the provided device templates. All in all, wrapping our HTML5 app with Intel XDK went without a hitch. From both of our experiences, this is usually the “black box” part of the development cycle where things go wrong, so we were pleasantly surprised when nothing did. I’d like to think that the Intel XDK played a big part in our first place win. Unfettered by technical issues, we were free to tweak the finer points of our core mechanics and develop an awesome game!

Xer Gata is a game artist/designer based in New York, NY. A third-culture kid and University of the Arts Alumni, he is an active member of the game development community in NYC. When he isn't competing in a weekend hackathon, Xer can be found making games and hosting game jams with his partners at Brooklyn Gamery. The other half of his week is devoted to freelancing as a graphic designer and creative strategist. He enjoys long walks on the beach via Oculus Rift.*

For more such Android resources and tools from Intel, please visit the Intel� Developer Zone

Top settings to look at to improve the Android experience