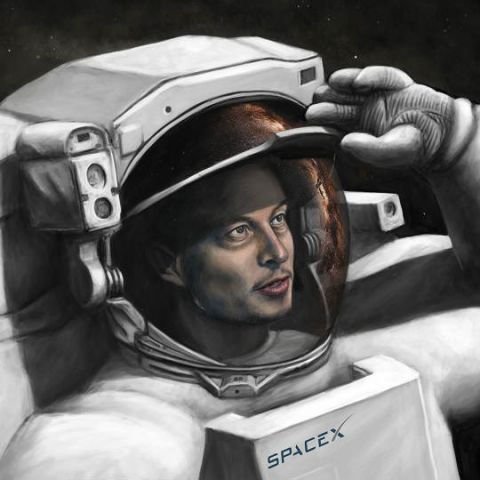 There is nothing conventional about Elon Musk and his multibillion dollar empire. Unlike most young twenty-something millionaires of the ‘90s tech boom, Elon Musk didn’t disappear in the midst of champagne and supermodels when he sold his stake in Zip2 for USD 307 million dollars in 1999 or PayPal to eBay for USD 1.5 billion dollars in 2002. It just wasn’t enough to quench Musk’s thirst for success. So instead of retiring like any sensible 31 year old with hundreds of millions of dollars to his name, Elon Musk figured he would take on the two biggest challenges which had the potential to revolutionise the world - electric cars and cheap space travel. Sounds easy enough, right?

The 1960s was a decade for dreams. Amidst a climate of political confusion, international war and cultural revolution the human race made astounding progress. The decade gave rise to the Green Revolution, industrial robotics, satellite broadcasts,computer games, programming language, the internet, electronic photography, space travel and so much more. Spacetravel in particular overshadowed every other innovation as it captured the imagination of billions. And after the momentous achievement on July 20th 1969 when humans first stepped on the Moon, everyone knew the world would never be the same.

But the dream ended too soon with the 14 December 1972 Apollo mission to the Moon. Since then the reaches of the lunar surface and the void beyond has been left abandoned by humanity.

The drive to colonise the Moon, travel to Mars and launch interstellar expeditions has been drowned out by the sounds of warfare for decades. It was perhaps destiny that in June 2002 - Elon Musk launched SpaceX promising the world that he could make space travel cheaper, faster and more reliable over time. And he delivered. 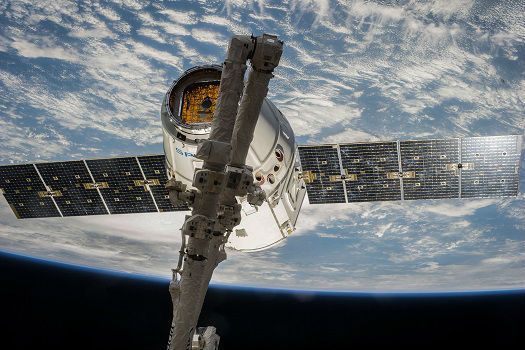 The Dragon spacecraft on its way to the ISS

As NASA retired the Space Shuttle program it still needed to deliver cargo, equipment and other essential supplies to the International Space Station. As the bidding over this lucrative opportunity opened up, major players like Lockheed Martin and Boeing (together known as United Launch Alliance) were considered the obvious choice. But SpaceX pulled the rug from under them and was awarded the USD 1.6 billion resupply contract to launch 12 missions.

That works out to a cost of about USD 57 million per launch on its Falcon 9 rockets. This may seem like a lot but considering that the average pre-2011 cost quoted by the ULA is about USD 380 million dollars per launch and the 2014 Russian Soyuz charges USD 70 million per trip, its not surprising that NASA chose SpaceX. But its not just about ferrying cargo for SpaceX, that is only the beginning.

SpaceX has done that which very few companies in its industry do – innovate. Instead on relying on outside suppliers for parts, models and designs, SpaceX decided to cut out the middle man and manufacture them in-house. By opting out of the traditional business systems for the aerospace industry, SpaceX effectively turned it on its head.

Being willing to risk his own money and reputation Elon Musk was able to demonstrate that the paradigm could be broken. And as he stepped over its shattered remains he wasn’t shy in proclaiming that SpaceX just wasn’t a company that would make space launches cheaper for cargo but was ultimately concerned with making human space flight an affordable reality. To do that would be a whole other challenge – to create a human rated spacecraft.

Father of Falcons, Dreamer of Dragons

SpaceX charges USD 5511 per kilogram to transport something to orbit. This remarkably low price even beats out their cheapest international competitors – the Chinese – and leaves big players like the ULA in the dust. The technology behind this well hidden, with no public patents or any records to hint at their innovation. But it does have a brand name – the Falcon rockets and the Dragon space vehicle.

The Falcon rocket series include the Falcon 1 and the Falcon 9 variants built to sustain a whole new fuel management system, materials use and avionic systems. Within six years of the first prototype testing SpaceX had a successful Falcon 1 test flight in September 2008, becoming the first privately built liquid fuel spacecraft to reach orbit. 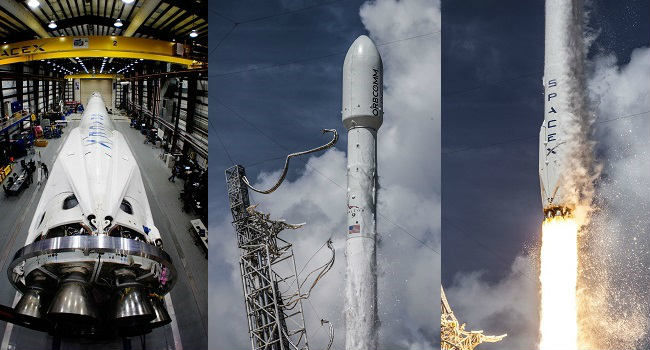 While the Falcon 1 was an expendable launch system and was retired after it successfully achieved its first commercial mission of delivering the Malaysian RazakSAT satellite to orbit in September 2009. The sights were now set on the Falcon 9 rocket which was not only human-rated, but also far more powerful and cheaper than any rocket engine in history. Having effectively solved the means to reach orbit and carry tremendous cargo the only thing left for SpaceX was to build a spacecraft that would use these rockets – Enter the Dragon.

The Dragon spacecraft developed by SpaceX is currently the only active reusable vehicle in existence. Its first launch was aboard the Falcon 9 rocket in December 2010, and became the first commercial built and operated spacecraft to successfully make it to orbit and back. And just two years later, the next iteration of the Dragon space vehicle docked with the International Space Station in May 2012 to make it to the record books once again. Within ten years of its creation SpaceX crossed milestones that had never before been reached by independent start up aerospace companies, and taken decades for larger government funded corporations. And they’re just getting started.

As American and international governments, private agencies and institutions book their travels on SpaceX’s Falcons and Dragons the company remains in a constant siege of innovation. With the release of the Dragon V2 in June 2014 – a reusable vehicle capable of hosting seven astronauts – NASA hopes it will be the replacement to the Space Shuttle. As further developments and additional features are engaged on the Dragon V2 in the coming months, NASA hopes that manned missions would begin by 2017- 18, but SpaceX and Elon Musk have their sights set a little farther - Mars.

The idea of the Mars Colonial Transporter is Elon Musk’s personal dream project and it pulls no punches. The goal is simply to transport humans and equipment to Mars using SpaceX’s next generation reusable rocket systems – the Heavy Falcon - and the advanced human-rated launch vehicles – the successors of the Dragon V2. So far the development of the large rocket engine required for a Mars mission has already begun at SpaceX but isn’t expected to be functional within the Mars Colonial Transporter project until 2024.

But given SpaceX and Elon Musk’s indomitable desire to break all boundaries it isn’t a far stretch to expect the upcoming Falcon 9 variants and Heavy Falcon rocket designs to be just the tip of the iceberg when it comes to future projects. With preliminary designs already set up to be up to nine times larger than anything that they already have in existence. Already touted as the biggest commercial rocket engine to ever be designed, the Mars Colonial Transporter will be capable of transporting over 100 tonnes of cargo all the way to Mars. With dreams of a much bigger eventual design, fit for a passenger manifest of up to 80,000 people at just USD 500,000 per seat - the MCT will be the medium by which humanity would colonise Mars. 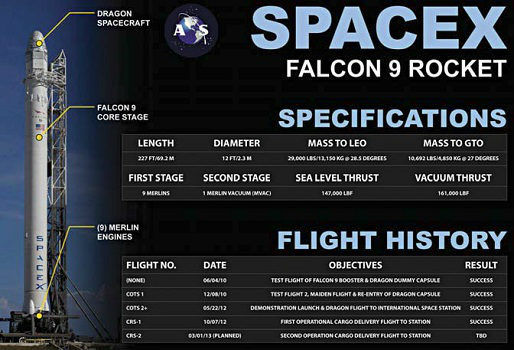 Some might not believe that all the resources and expense towards space travel is a waste. But we believe that the future is above us and our scientific and technological achievements are just as important a barometer of our cultural aspirations as social welfare. It’s worth remembering that just over a hundred years ago electricity was nothing more than a novelty, an elusive trick, dismissed as nothing worth much to humanity. But it has gone on to shape every facet of human thinking, culture and existence. Good technology makes life interesting, great technology reinvents life.

Ultimately, the journey to Mars and the far reaches of space isn’t just a matter of money. There is something deeper to SpaceX’s enterprise, more lasting and ennobling about their desire to make the heavens our backyard. To create a future where the reality of walking on alien soil isn’t the private reserve of millionaires and rockstars but the willful right of all human beings. Isn’t space after all the final frontier? To make our world infinitely larger as we further our quest to fulfill our destiny as citizens of the cosmos. The commitment to the dream makes SpaceX an interesting and hopeful experiment to watch.

Is the Realme GT the most affordable Snapdragon 888 phone? Here's what you need to know
We talk to Akshay Ahuja from Amazon India on the eCommerce giants impressive growth in the consumer electronics space and the big bets for the future
Qualcomm and Microsoft’s exclusivity deal set to expire soon: Here’s what it means for Windows on ARM
Google for India 2021: New features coming to Google Assistant, Google Pay and more
Indian government to meet stakeholders to discuss future of cryptocurrency in India
Advertisements