20 most anticipated Sci-Fi, Fantasy and Comic Book movies of 2017 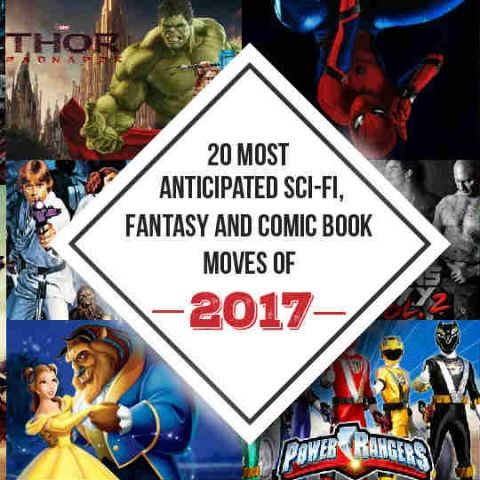 We had some awesome movie releases in 2016, while some disappointing movies hit theatres too, last year. It’s the first working day of 2017 and what better way to get the ball rolling than discuss 20 of the most anticipated sci-fi, fantasy and comic book movies that will release in 2017. Since this is specific to the above-mentioned categories, we will not include the likes of John Wick 2 and The Fate of the Furious since they fall under hardcore action.

2. Pirates of the Caribbean: Dead Men Tell No Tales

The last Pirates of the Caribbean movie was quite disappointing. We hope this one has some “Curse of the Black Pearl” magic up its sleeves!

J.J. Abrams played it safe with The Force Awakens, and Rogue One showed us the dark side of the War. Now, all eyes are on Episode VIII. After the death of Carrie Fisher, we are looking forward to her role in the film. Apparently, she had finished filming her section, and if there is anything left, we have special effects to the rescue.

Man of Steel was an above-average movie, and Batman v. Superman wasn’t well received, either. The Justice League trailer, meanwhile, looks awesome, and we hope it’s the redeeming film for DC.

I AM BABY GROOT! Need we say more?

Based on the comic book series, Wolverine: Old Man Logan, we will see Hugh Jackman reprise his role as Wolverine for the last time. It will be sad to see Jackman leave the iconic role behind and we are looking forward to seeing Jackman’s replacement. Will he be able to live up to the legend?

The web slinger made his debut in Captain America: Civil War, and now that Marvel has taken over the story of Spiderman, we can't wait to see him in action in Homecoming. Tom Holland looks perfect as a teenage Peter Parker.

Gal Gadot looks like she was born to play Wonder Woman, and if the trailer is anything to go by, then Wonder Woman will be one thrilling film to follow.

10. Beauty and the Beast

The original story of Thor: Ragnarok has appearances from Marvel characters like Hulk and Dr. Strange. We can’t wait to see this crossover after the success of Civil War.

12. War for the Planet of the Apes

War of the dawn of the rise of the planet of the apes is the best way to describe the franchise. The apes have taken over, and this is humanity's last stand. Can the movie deliver an entertaining adventure?

Also titled Prometheus 2, Alien Covenant is a sequel to Prometheus. The movie received mixed reviews, but I personally liked it. This movie will depict the rise of the Aliens. Am I the only one who thinks that this movie's story line is very reminiscent of Dead Space?

I loved the first two Mummy movies staring Brandon Frasier. This one stars Tom Cruise, and even though the trailer looks interesting, we think it reveals too much of the film's plot.

I was fortunate to see the un-rendered trailer when it leaked online, and if the trailer is anything to go by, then this movie is one to look forward too. It has Idris Elba as the legendary gun slinger and Matthew McConaughey as the man in black.

The caped crusader is back in his Lego avatar, and the trailer tells us that this one isn’t necessarily for kids. It has some dark, sarcastic humour that will be a big hit on the screen.

Scarlett Johansson dons the role of the Major! Ghost in the Shell will be a screen adaptation of the Japanese manga of the same name. The trailer looks very interesting, and we can’t wait to see the film in action.

Will Harrison Ford die in this one, too? Spoiler alert for those who haven’t seen Force Awakens, but unless you were hibernating in a cave somewhere it is your fault that you haven’t seen the film. The trailer has a Cyber Punk theme to it. The cast is very interesting, with the likes of Ryan Gosling and Jared Leto in the film.

Explorers encounter a gigantic ape and other monstrous creatures after traveling to an uncharted island in the Pacific Ocean. Sound familiar?

The plot of the movie revolves around a six-member crew of the International Space Station that is on the cutting edge of one of the most important discoveries in human history: the first evidence of extraterrestrial life on Mars. Could things go wrong? Of course!

Realme to launch the realme Watch 2, Watch 2 Pro, Buds Wireless 2: How to watch the live stream
Indian government to meet stakeholders to discuss future of cryptocurrency in India
The Facebook Company goes Meta: Here’s what it means for the future of Facebook
Apple is now offering the world’s costliest duster at Rs 1,900
Panasonic launches new home appliances ahead of the festive season
Advertisements