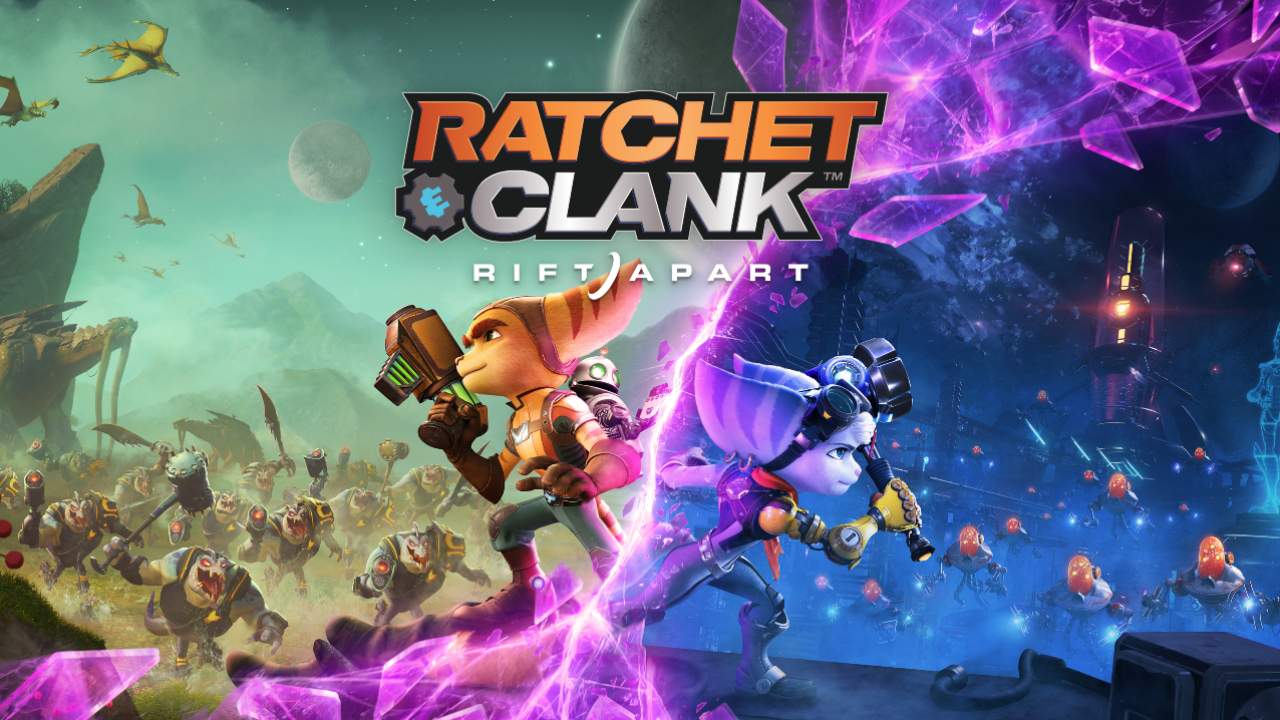 Ratchet and Clank: Rift Apart is a PS5 exclusive game. The game is priced at Rs 4,999. The game exploits features of the PS5 like the DualSense Controller and the SSD.`

The story of the game takes place after the Future Saga, which was released for the PS3 and if you haven’t played those games, it's OK. While there is a small recap in the form of a celebration at the beginning of the game, it doesn't do justice to the legacy of the franchise. It is also a slight disappointment that one of my favourite characters in the game, Captain Copernicus Leslie Qwark, has a very very small role to play. But that said, the story has a lot of heart and will appeal to newcomers and veterans of the franchise alike. The story is simple, Clank has rebuilt the Dimensionator so that Ratchet, the lone surviving Lombax can find his kin. However, things don't go according to plan and the evil Dr. Nefarious steals the Dimensionator causing massive chaos across the dimensions. 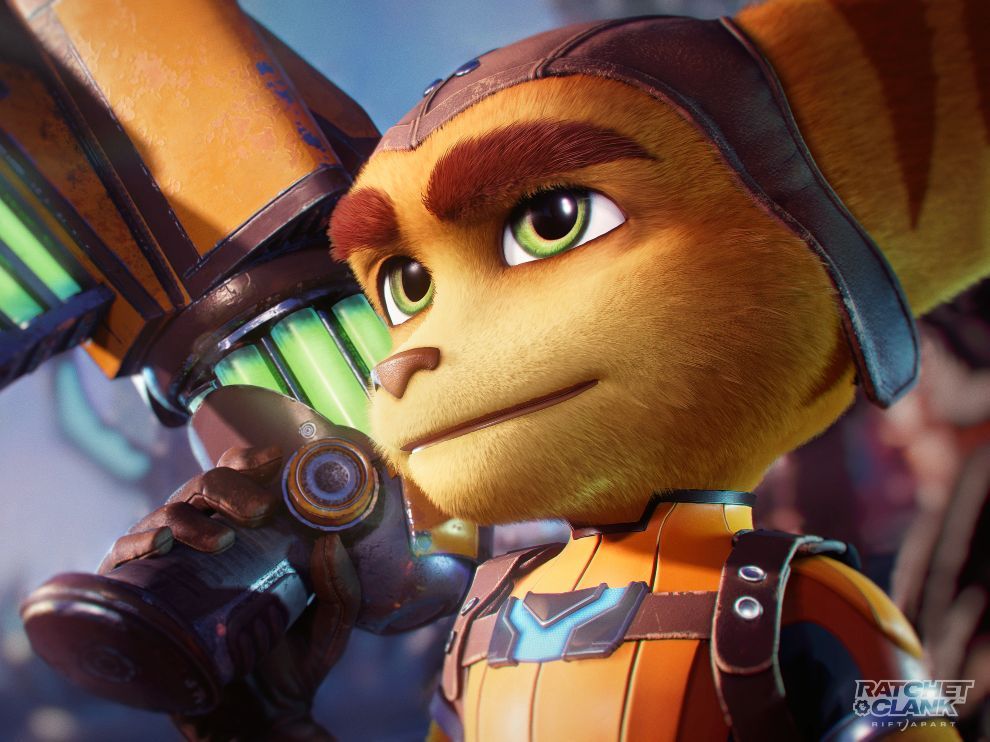 During the chaos, Dr Nefarious opens a rift to an alternate dimension where we are introduced to a female Lombax - Rivet and she is my new favourite Lombax in the franchise. Not only does she have heart, but the voice acting and animation of Rivet is spot on to make you fall in love with the character. She has a metal arm and the history behind her losing her arm is well explored in the story. She also has trust issues and shares the same loneliness of being the only Lombax in her universe - one which we have explored with Ratchet in past games. She also has some of the best one-liners in the game, which will make you chuckle.

In addition to Rivet, there are callbacks to some beloved characters in the franchise that have a slightly different story in this new dimension. The plot of the game is simple and considering the target audience, rightfully so. It has good lighthearted humour, some interesting plot twists and is definitely a story the family can enjoy together. It has messages like believing in yourself, the virtue of forgiveness, and above all, the power of friendship. 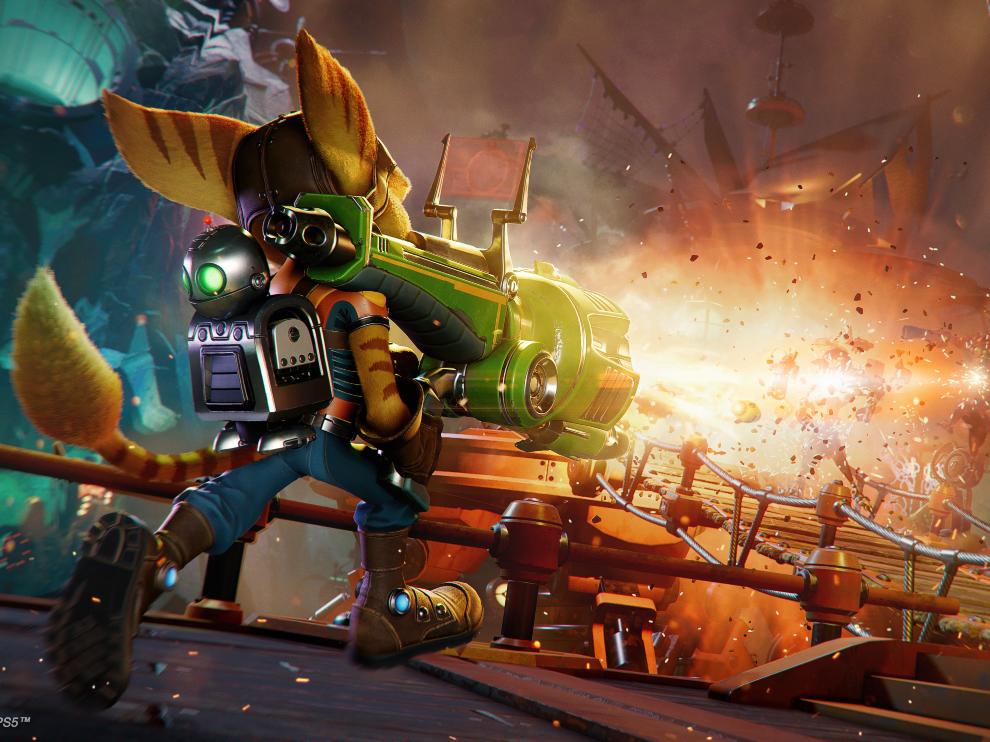 Familiar; yet new, is the best way to describe the gameplay in Ratchet and Clank: Rift Apart. Strafing, jumping, the weapon select wheel and some of the traversing all feel familiar. But there are some new elements here as well. A dash that makes you temporarily invulnerable, new weapons in your arsenal, and some new traversal tricks, help make the gameplay feel fresh. Let's break it down.

At its heart, the gameplay is the same we have come to love from previous entries in the franchise. It is a third person action-adventure game. You play the game as both Ratchet and Rivet and their gameplay mechanics, abilities and weapons are identical. So, when one character gets a new ability, weapon or upgrade, the same is reflected with the other character. Whether this is a good or a bad thing is entirely up to you. Considering the variety in weapons on offer, the gameplay is pretty diverse. 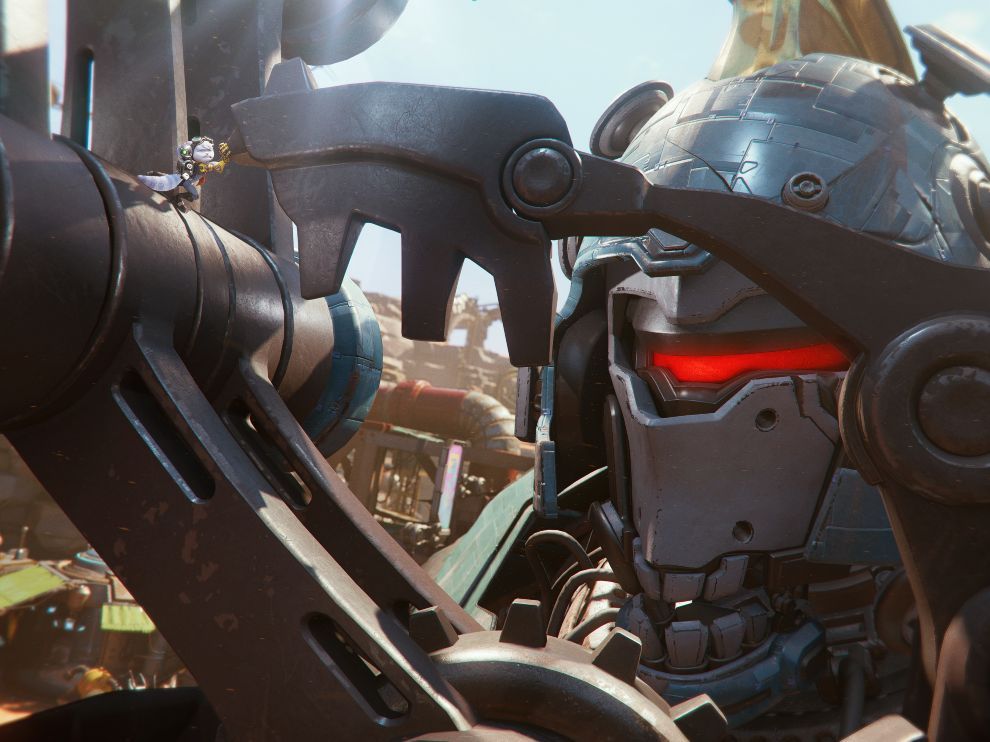 Speaking of weapons, in true Ratchet and Clank fashion we have an interesting mix of some old and new weapons on offer and the weapons make use of the Adaptive Triggers on the DualSense controller. The Burst Pistol, for example, will fire slow, but accurate, rounds when the trigger is half pulled. When pulled completely, the gun will fire rapid but less accurate rounds. The same for the Enforcer (the game’s version of a shotgun). Pull the trigger halfway for a single barrel shot or pull it completely for a double barrel shot. The NegaTron Collider charges up as you half pull the trigger and fully pulling it lets out a charge. This makes the adaptive triggers quite useful for these weapons. In some weapons, like the grenade launcher, half pulling the trigger brings up the aiming reticle, which can also be achieved by holding down the left trigger. Some weapons are traditional in their firing mechanism (like the sniper rifle) and only use the added tension in the trigger for an immersive experience.

There are a bunch of new weapons at your disposal this time around. There is the Ricochet, which as the name suggests, ricochets on enemies a few times. There is also the Topiary Sprinkler that freezes enemies in place by converting them into plants. And the you have Mr Fungi who hovers around you and fires a swarm of fungus spores. In the heat of battle, Mr Fungi can also distract enemies and draw fire away from you. 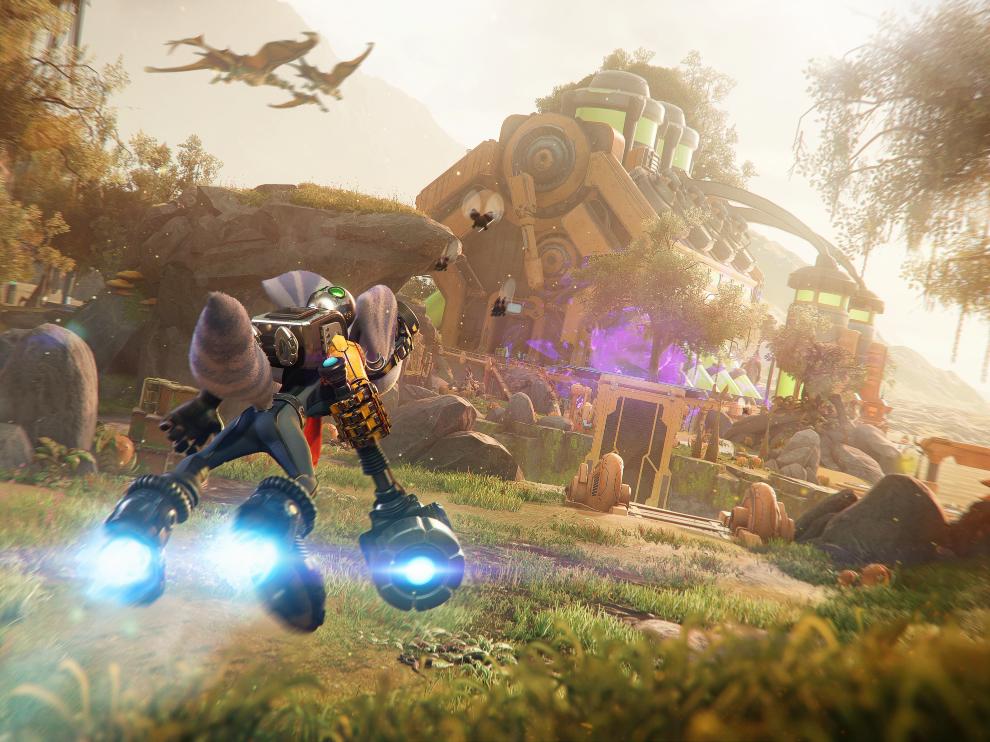 There are more than 20 weapons that are in your arsenal for you to mix up the gameplay. Like traditional Ratchet and Clank games, the more you use your weapons, the more powerful they get. You can also visit Mrs. Zircon who is the weapons vendor and not only can you buy weapons from her, but also upgrade them.

The level design in Ratchet and Clank: Rift Apart has seen some changes. To begin with, there are vast open areas you will explore with multiple quest objectives along with some side objectives and collectables. There are also the standard cinematic set pieces that will keep you at the edge of your seat. The new highlight here is the ability to jump from one level to the next by using a rift and the SSD loads a new level in a matter of seconds making the game feel truly next-gen. While these rift jumps are scripted, their implementation is very impressive. Once you boot up the game, it doesn't take more than a second or 2 to load it from the save menu or even when you die. It's truly amazing. 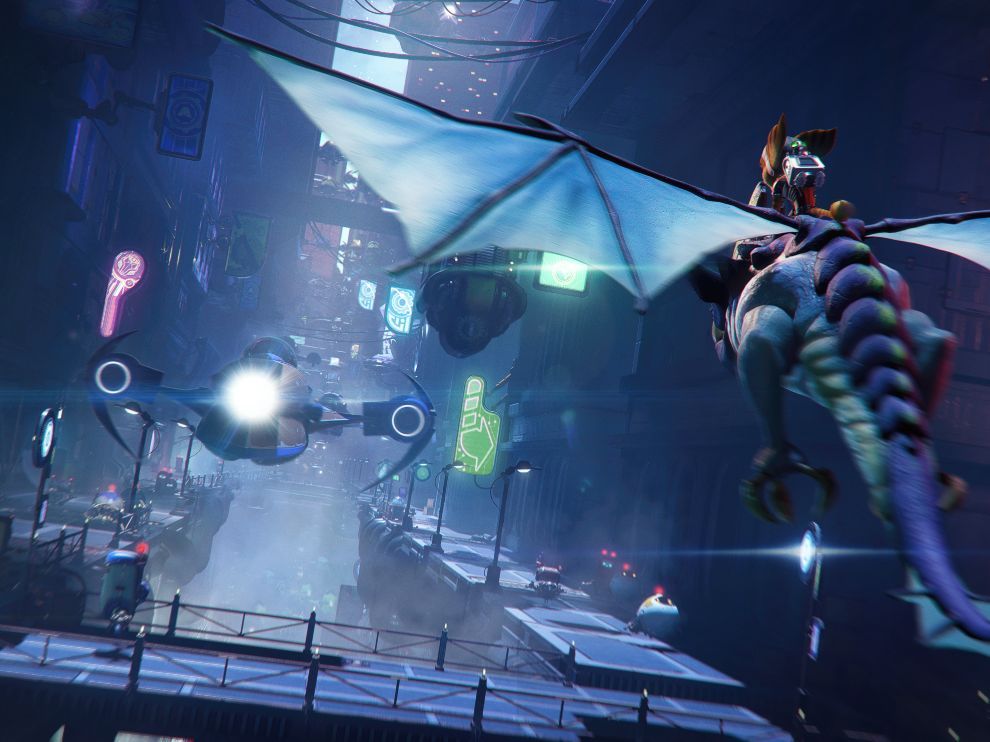 The game is filled with some truly frantic battles and while you can choose a set of favourite guns and stick to them for the duration of the game, I highly recommend giving each weapon a chance as they truly diversify the experience.

The only downside to the gameplay is the boss battles. While there are diverse planets to explore and some truly epic battles, most of them culminate with the same four large enemies making the boss battles quite repetitive. Think of these as the same Trolls recycled as mini boss fights throughout 2018’s God of War. Sure, the Dr Nefarious battles are a standout highlight, but the game could do with some more varying boss battles.

You also have pocket dimensions you can visit which are platforming challenges and usually end with some reward. You also take control of Clank for some puzzle sequences and a small hacking robot for some action-packed hacking sequences and all these are a fun distraction from the main game. Overall, the gameplay of Ratchet and Clank: Rift Apart is frantic and fun with the only downside being the lack of varying boss battles. 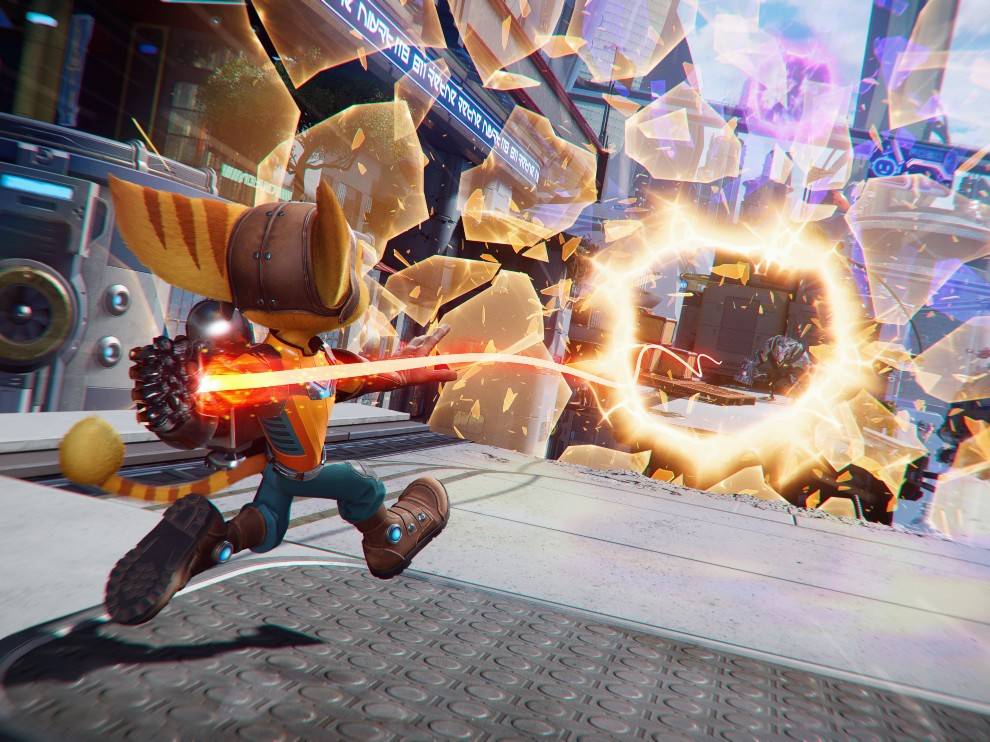 Ratchet and Clank: Rift Apart looks like a Pixar movie. For a large part of our review, we played the game in 4K 30FPS with Ray-Tracing enabled and the experience was cinematic and sublime. Considering the number of effects on screen, large groups of enemies and your weapons firing all over the place, I did not notice the game stutter at all - an incredible technical achievement. From the neon-lit Nefarious City to vast open deserts the game has a lot of diverse environments you can traverse and each looks amazing.

The effects your guns produce are also a sight to behold. From the flashing muzzle of the Enforcer to the lightning generated when you shock an enemy, and even flash of the grenade, on a good HDR TV, you can truly enjoy the dynamic range the game brings to the table.

The character models deserve special attention too, especially Ratchet and Rivet. From their fur looking realistically wet in the rain to the Lombax’s ears fluttering when grinding on a rail or using hover boots, there are many small touches that add to the immersion. Animation movies have a lot of physical comedy and the same is expressed in the game, especially in a lot of sequences involving Dr. Nefarious. Eagle eyed gamers will also notice the ray-tracing effects implemented on Clank’s shiny body. The devil lies in the details, and the details here are very impressive. 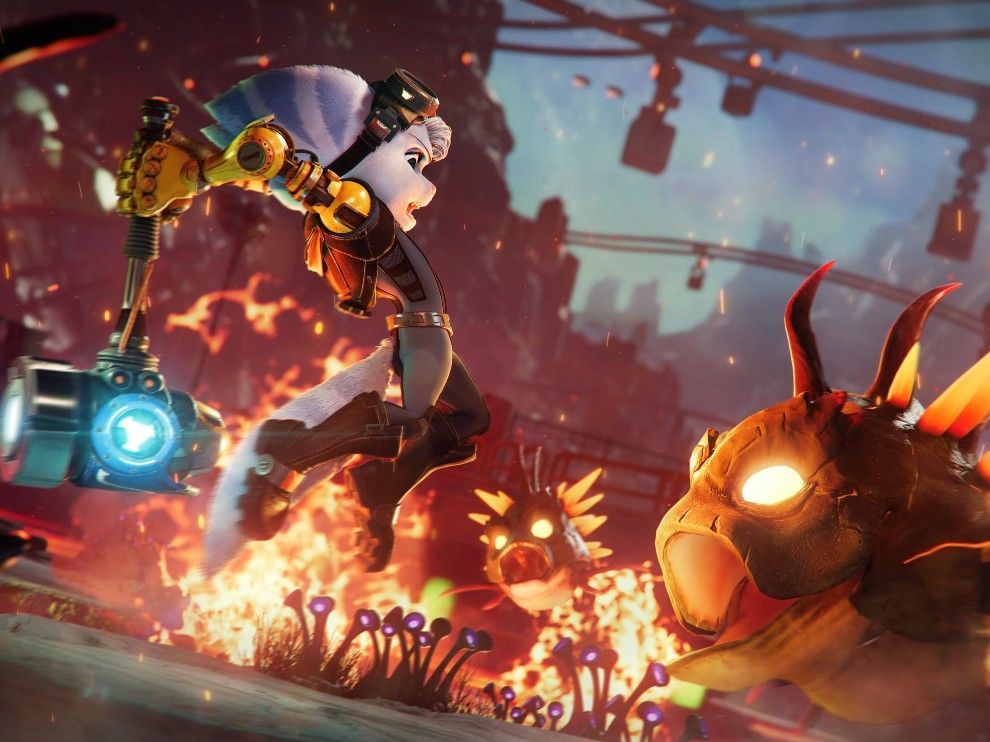 The load times also deserve special mentions and if you skip a cinematic, the game loads in a heartbeat eliminating the era of loading screens being hidden behind cutscenes. Jumping through Rifts is a highlight where the PS5’s SSD gets to flex its muscles.

Moving over to sound, once again, you can expect Pixar level production with the voice acting, background score and sound design. Ratchet and Clank bring their friendly voice with quirky one-liners. But the voice actor of Rivet deserves a special mention. She has done an outstanding job creating a character who is vulnerable, yet has her guard up. She is also approachable and has a caring side to her, even if she doesn't trust Clank the first time, she meets him. 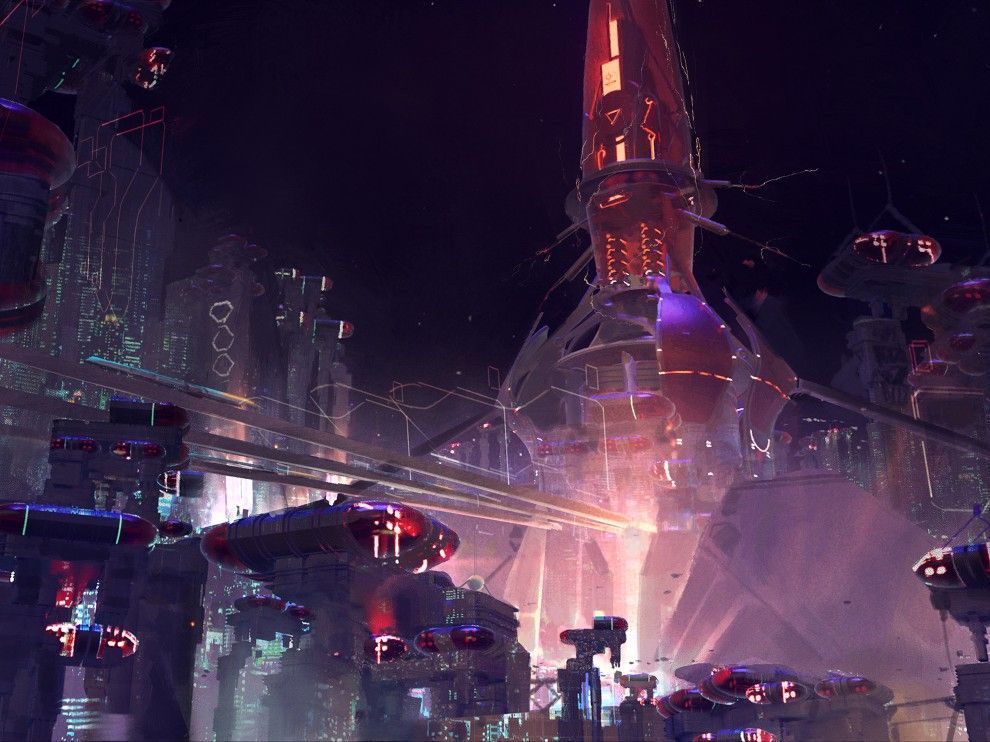 The game makes use of the PS5’s 3D audio capabilities as well and with a good headset on, you can make out the bullets whizzing by you and once the action gets intense, the sound can get quite immersive.

As much as I enjoy the 3D audio capability of the game, I recommend you play it with your speakers. That's because the game also utilizes the speakers on the DualSense controller to add either environmental sound effects, effects from your weapons and more. This combined with the haptic feedback on the controller makes for an immersive gaming experience.

Ratchet and Clank doesn't stray far from the formula that made it a great platformer action game. I miss the fact that Rift Apart doesn’t have the double innuendo titles like Going Commando, Up Your Arsenal, and Quest for Booty the franchise started out with. It's more straightforward and takes calculated risks the developers know will pay off. It is a visually stunning game with a diverse arsenal of weapons. The game definitely highlights the abilities of the PS5 (review). The story of the game is full of heart. We would have loved to see more diversity in the boss fights, but the package on offer is one that will definitely appeal to gamers old and young.