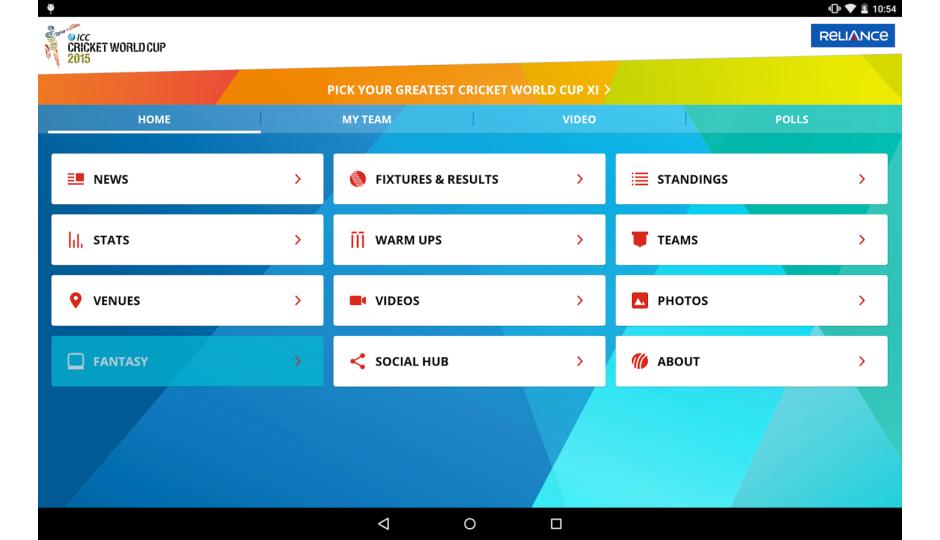 The Cricket World Cup 2015 gets underway in about couple of weeks. You must be all excited to catch up with all the latest buzz around the world's biggest cricket tournament. Well, ICC has just launched an official Cricket World Cup 2015 mobile application, allowing you to use your Android or iOS device to get the most of the experience on the go.

ICC has teamed up with Reliance Communications for the application. The app promises you to keep abreast of the live action with the fastest source of live scores and ball-by-ball commentary. It also features video highlights and the most important moments of the match for those who haven’t caught the action live on television

The ICC Cricket World Cup 2015 has a very simple interface. On launching the app, you are taken to a blue-themed home screen. On the masthead, you have ICC WC and Reliance logos followed by a countdown that directs you to 100 Greatest WC moments.

The centre has four columns featuring Home, My Team, Video and Polls. Home section has multiple categories including fixtures, results, standings and stats. Scroll down to access more features such as news, photos, teams and venues. 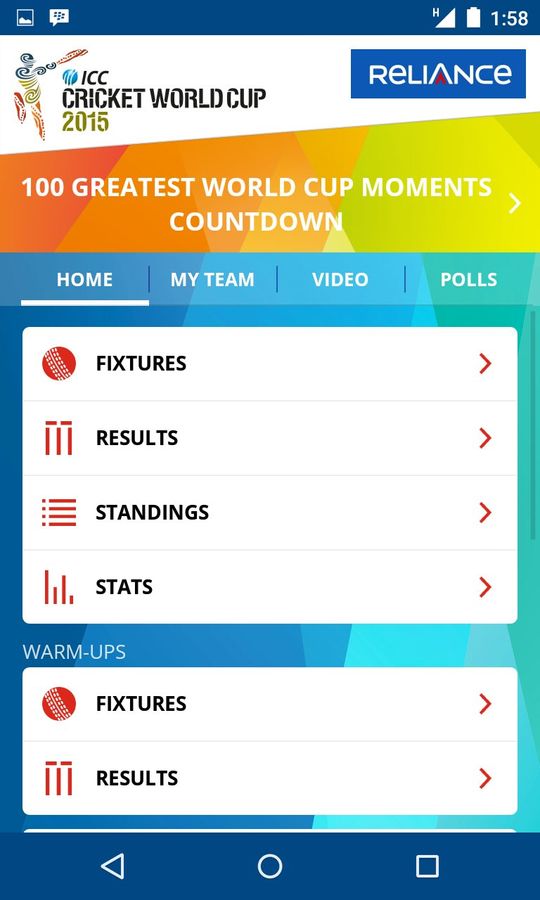 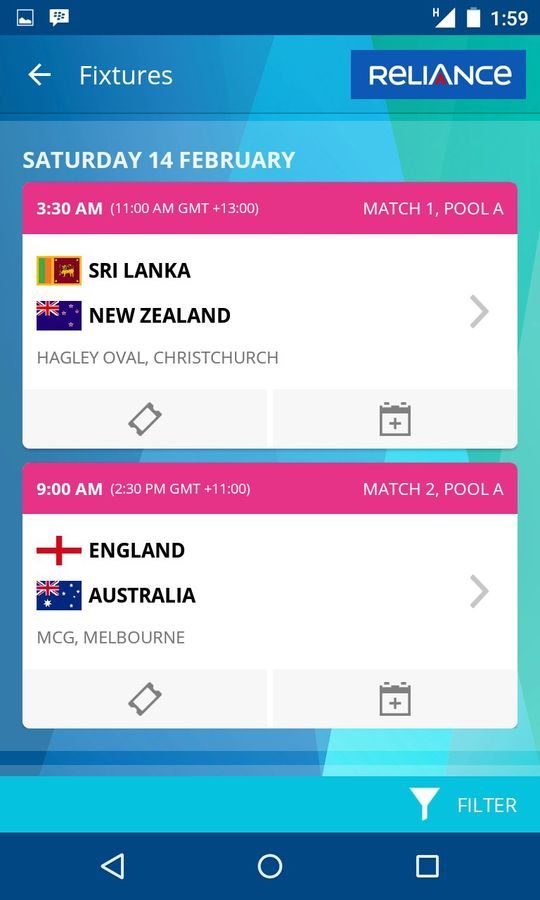 The app also has a 'fantasy' section that directs you to play the fantasy league for ICC cricket world cup. There's also social media integration via 'Social Hub', which lets you access latest tweets with regards to the ICC World Cup 2015. 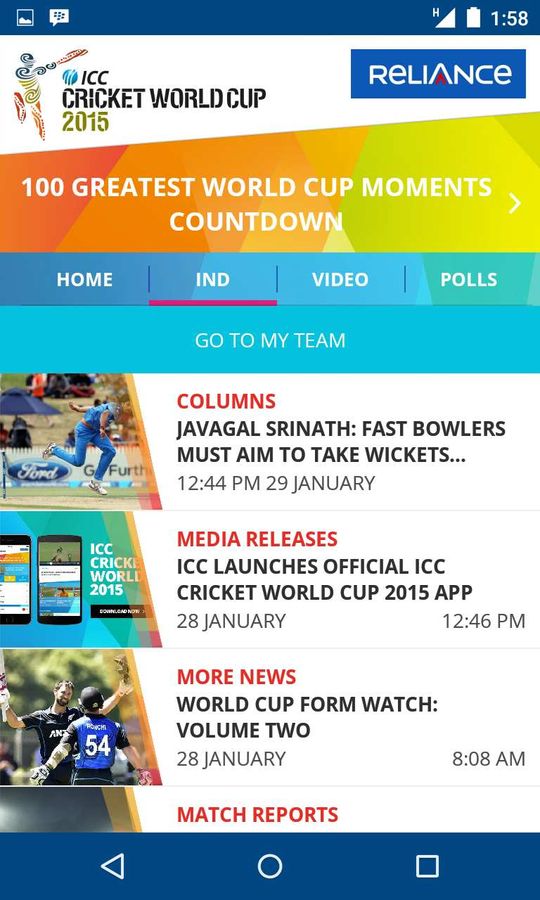 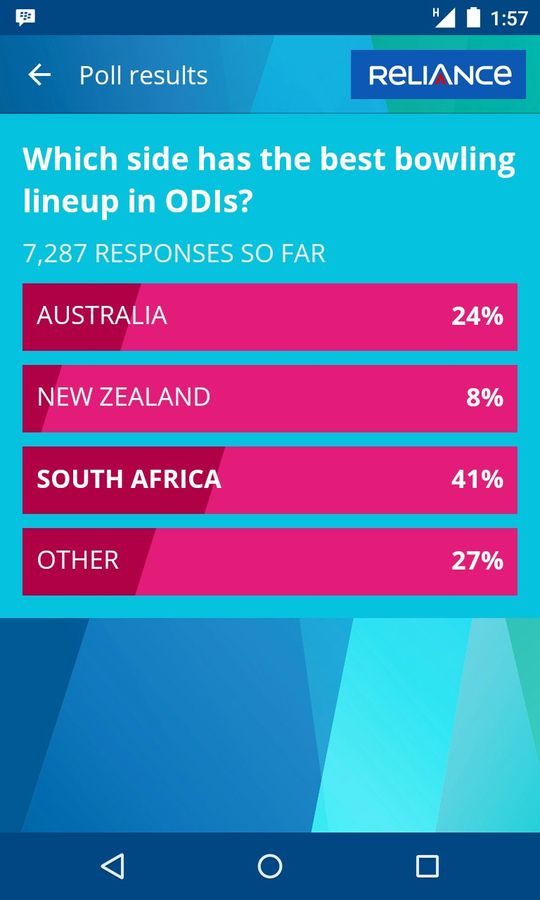 For cricket enthusiasts, ICC's app offers a range of features other than usual ball-by-ball commentary. It features video highlights and the most important moments of the match. The video highlights are going to include all the dismissals, the big moments, the big innings, the best dismissals and also the post-match press conferences.

On choosing a team via 'My team' section, users are notified of the latest updates around their team. For more insight, the app gives you detailed statistics, including top run-getters and wicket-takers. The app also includes latest news and exclusive expert columns. 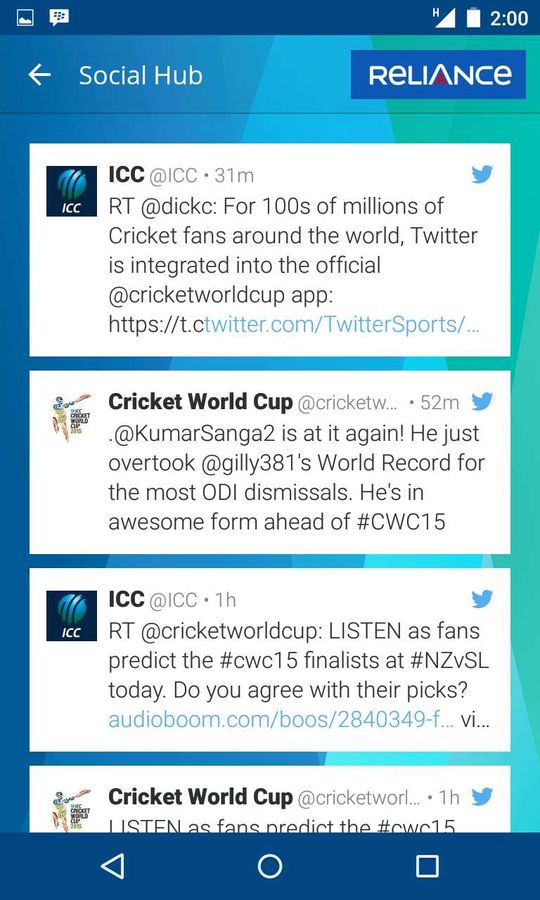 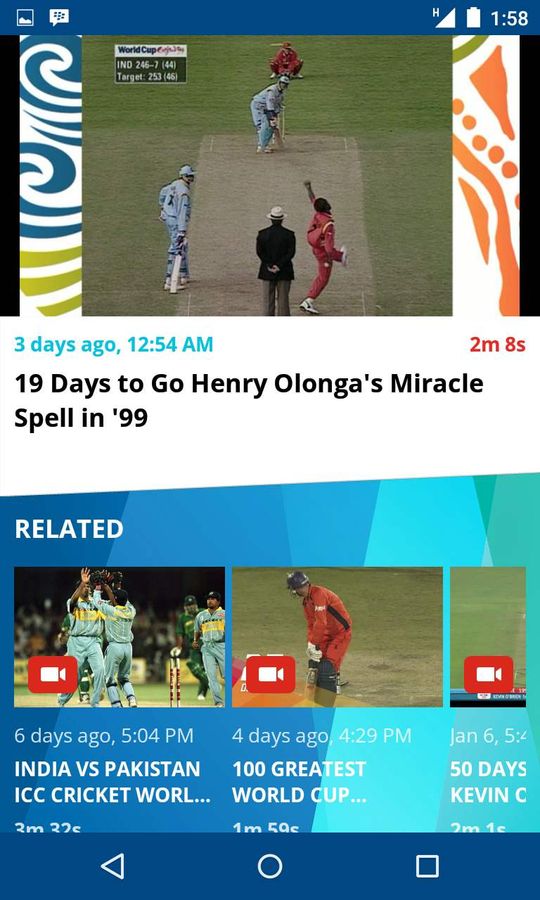 One of the interesting features is the poll section where users can take part in various polls related to the tournament. Currently, it has running poll on Which side has the best bowling lineup in ODIs. Users can also see the number of responses so far, and percentage share.

ICC's official Cricket World Cup 2015 app is overall a fine app. Though it is slightly sluggish as it takes time to load the content. For cricket enthusiasts, the app should include more interactive features perhaps intuitive graphs including runs break up, partnerships, over comparisons and wagon wheels. We hope more features to come as the tournament nears. But that said, it's quite comprehensive, and worth downloading.

Instagram Video Posts May Discontinue To Make More Room For Reels
How To Backup WhatsApp Chat On Android: A Step-by-Step Guide
How To Sign In To iOS Apps With Google Chrome Passwords On Apple iPhone
How To Save Instagram Story With Music In Gallery (Story Saver App)
Twitter Is Testing an Edit Feature for Tweets: Here Are All The Details
Advertisements