DisplaySearch, an online research agency specializing in display technologies, has raised doubts about the viability of Samsung's bendable LCD TVs as theoretically, bendable TVs are only possible using AMOLED tech. 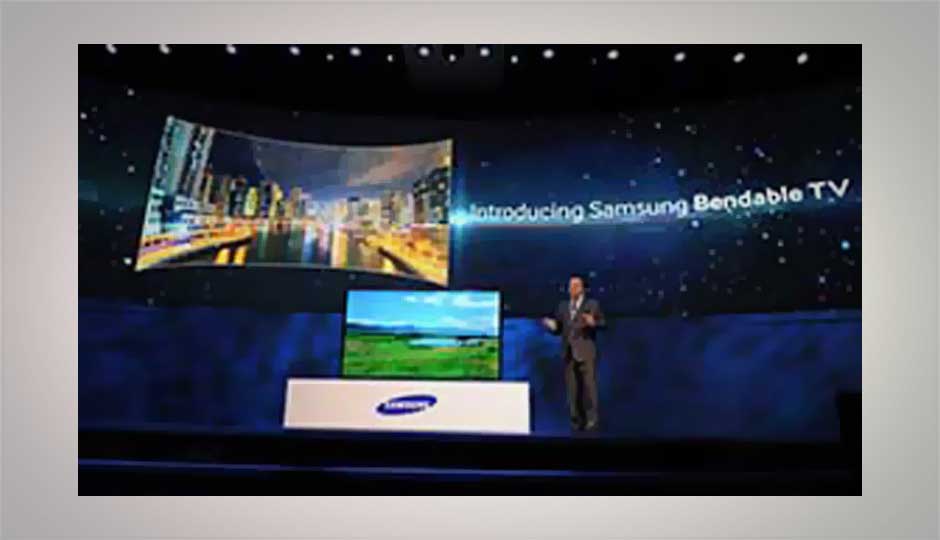 Basically, it is an arduous task to bend the LCD panel, forget about bending the backlight. As a backlight is composed of a rigid plastic light guide plate (LGP) and a metal chassis, therefore continuous bending of and flattening of the backlight is not as easy as it is for the LCD glass panel. To sum it up, just using a curved backlight might not be enough for bendable LCD TVs.

This makes us wonder, how did Samsung manage to pull-off a bendable LCD backlight? The picture above shows a bendable LCD TV in both flat and curved modes. The back of the TV still remains flat, even when the screen changes from flat mode to a curved mode. Therefore, it is pretty evident that the backlight on this bendable LCD TV is most likely rigid (non-bendable), which brings us to a conclusion that the backlight remains flat when used in both flat and curved LCD panel modes.

Now, if a panel is bent while the backlight is still flat, it is most likely to result in non-uniform light luminance on the TV screen. Usually, to prevent this from happening, modification of several design factors are required such as the LGP print pattern and LED light bar configuration. Theoretically, the backlight for bendable TVs must cover both flat and curved modes and keep both the original (for flat mode) and modified (for curved mode) design elements in a single unit.

It is very hard to obtain an optical film or LGP that can cover both curved and flat modes. For backlight on edges, the modification of LEDs may not be enough to preventing non-uniformity, as they make use of side LED bar structures in which the direction of the bar is perpendicular to the bending direction. Hence, a direct backlight is the most likely candidate for bendable TVs.

To rectify this non-uniform luminance in direct type curved LCDs , there has to be adequate spacing of each LED in a light bar or application of a different lens. For instance, the backlight can combine two types of LED light bars, designed for both flat and curved modes in a single unit. So eventually, it can work uniformly in both modes , by turning on the lightbars in the flat backlight and curved mode by turning on the light bars in the curved backlight.

However, this design module only works with a definite set of rules and no changes in curvature radius can be made. Hence, its safe to come to a conclusion that Samsung's bendable LCD backlight only allows for two modes having a fixed curvature radius of 4,500R.

AMOLED bendable TVs do not have such restrictions leading many to come to a conclusion that they are the real bendable TVs and will offer more consistent and accurate performance.