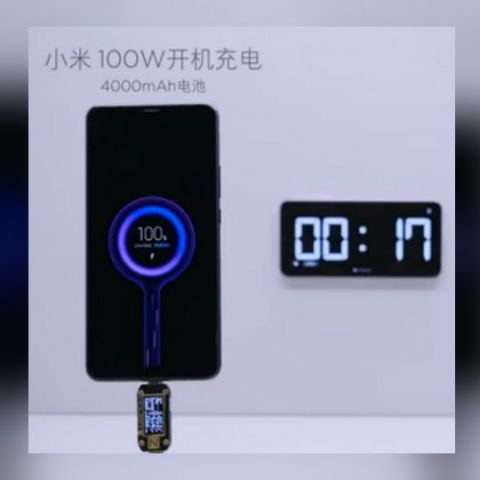 The smartphone is one of the most rapidly evolving technologies. The design of a smartphone is evolving with near bezel-less display and now foldable screens, and so are its internals. Some handsets makers are trying to push the boundaries by packing more memory, storage, and faster hardware. However, one similarly important aspect of a phone is the charging mechanism it employs. While wireless charging might be the future, wired charging is the norm currently and development in this field has been relatively slow. Xiaomi could soon change that with a 100W Super Charge Turbo technology that it has showcased in a new video.

The Chinese smartphone manufacturer has showed off its latest charging tech, which is presumed to soon come out of development and into phones. The company’s president Lin Bin has posted a video on Wiebo demoing the capabilities of the 100W fast charging solution, at 20V/5A, which topped up a 4000mAh battery in 17 minutes. It also Xiaomi’s charging tech with the leading current wired charging option from Oppo, which is the 50W SuperVOOC charging at 10V/5A.

If the video can be believed, Xiaomi is making progress in the field of wired charging as the phone being topped up using its new 100W charger has a 4000mAh battery and is fully charged in 17 minutes. In contrast, the phone being topped up using Oppo's 50W SuperVOOC manages to reach 65 percent in the same time, with a smaller 3700mAh battery. There is currently no info on when the new tech could show up in the company’s commercial products. However, reports suggest that the company might make some announcement about it today.

With so many charging technologies and each claiming to be superior to the other, Digit conducted a charging test of the most prominent ones. You can check out our video below where we compare a slew of Fast Charging solutions like Warp Charge, Dash Charge, QuickCharge 3.0, VOOC Flash Charge, and Super Charge.