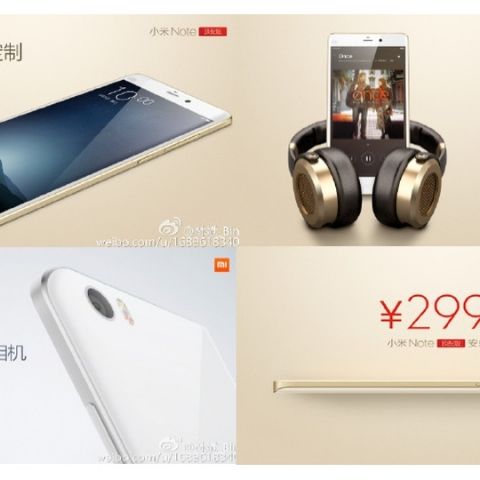 The Mi Note Pro has a 5.7-inch 2K display. It sports 13MP rear camera with Sony IMX214 sensor, optical image stabilization and dual-tone flash and 4MP camera. It comes with 64GB eMMC 5.0 Flash while connectivity options include LTE-CAT 9, up to 450Mbps download speeds. It is powered by a 3090 mAh battery. The phone runs Android 5.0 with MIUI custom skin.

The device along with Mi Note was announced in January this year. The phablet will go on sale in China on May 12. So far, there's no word on when the device will be launched in other markets. However, we are hopeful the company will launch the device in India soon.

We expect the price of the device to be lesser in India considering the recent criticism the company faced for its Mi 4 smartphone, which was priced around Rs. 20,000. It's worth pointing out here that Xiaomi has made its name in the Indian market for its budget devices. Recently, the company launched a new variant of the Mi 4, called the Mi 4i, priced at Rs. 12,999. Check out our Xiaomi Mi 4i Review

Another anticipated Xiaomi device is the Mi Note. The smartphone comes with a Snapdragon 810 SoC. It has a 5.7-inch full HD display with Gorilla Glass 3 protection. Other important features of the phone include 13MP rear and 4MP front facing cameras, dual 4G SIM slot and 3000 mAh battery. Both Mi Note and Note Pro seem to be important devices for Xiaomi as it is reportedly planning to ship 13 to 15 million units of the phablets this year.