Xiaomi Mi A3 Android One smartphone with Snapdragon 665, 48MP triple-rear camera launched in Spain: Specs, price and all you need to know

Xiaomi Mi A3 goes official at a launch event in Spain.

It is a re-branded version of the Mi CC9e, which was recently launched in China.

The Mi A3 is an Android One device that runs on stock Android 9 Pie.

Xiaomi has launched its third Android One smartphone in the A series called the Mi A3 and as speculated, the handset is a rebranded Xiaomi Mi CC9e. While the Xiaomi Mi CC9e features MIUI 10, the Mi A3 runs on stock Android 9 Pie and is powered by the Qualcomm Snapdragon 665 processor. Same as the Mi CC9e, the handset comes equipped with an in-display  fingerprint sensor and features a waterdrop notch display design on the front. While the launch date of the handset in India is not confirmed yet, it will be launched tomorrow in France and on July 25 in Poland. As is the case with an Android One handset, the Mi A3 will receive major Android updates for two years and security updates for the next three years.

The Xiaomi Mi A3 comes equipped with a 6.08-inch AMOLED HD+ display that has a 19.5:9 display aspect ratio with a resolution of 1560 x 720p. While the handset has a slightly bigger display, this is a step back from the Full HD display on the Mi A2 that has a 1080 x 2160p resolution. The Mi A3 is powered by the 11nm Qualcomm Snapdragon 665 processor and comes with 4GB RAM and options to choose between 64GB and 128GB of internal storage variants. It is backed by a 4030mAh battery that supports Quick Charge 3.0 with 18W Fast Charge. There’s a USB Type-C port for charging and it also comes with a 3.5mm audio jack, which was missing on the Mi A2. 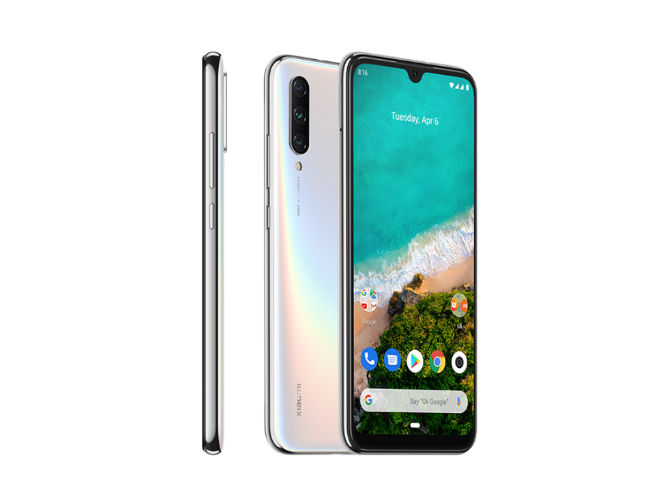 In terms of optics, the Mi A3 features triple rear cameras, which consist of a 48MP primary Sony sensor with f/2.2 aperture lens. The main camera is supplemented by an 8MP ultra wide-angle camera and there’s a 2MP depth sensor. The rear camera on the phone supports AI portrait mode and can record 4K video at 30fps and slow motion Full HD video at 120fps. On the front is a 32MP sensor, which is paired with an f/2.0 aperture lens and comes with support for AI Face Unlock and Panorama selfie.