The device is equipped with the unannounced Snapdragon 632 SoC with 3GB RAM and scores 1155 in single-core and 2738 in multi-core performance tests.

A mysterious new Xiaomi smartphone with codename ‘Berlin’ has been spotted on Geekbench ahead of the Mi Mix 2S, which is expected to be unveiled on March 27. As per the listing, the device runs on Android 7.1.2 Nougat and is powered by the unannounced Qualcomm Snapdragon 632 SoC, which is clocked at 1.2GHz, with 3GB RAM. No other details of this mystery smartphone has been revealed yet but it scores 1155 in single-core tests and gets 2738 in multi-core performance. 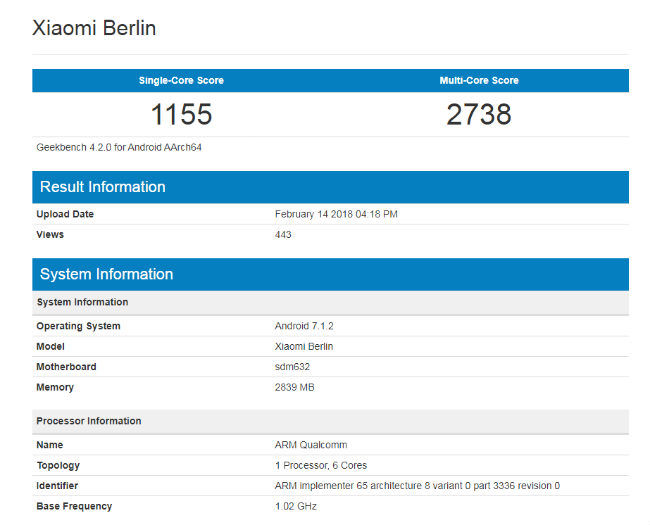 The ‘Berlin’ is obviously not the Mi Mix 2S as Xiaomi confirmed that it will be launched equipped with Qualcomm’s latest Snapdragon 845 Processor. The Mi Mix 2S was also leaked in images and if they are to be believed, it will not come with a notch on the top-right corner of the display, the previously rumours suggested. The device can also be seen featuring a vertically stacked dual rear camera setup and possibly a glossy ceramic or glass back, which could come with support for wireless charging.

Xiaomi will also be launching its Compact Powerhouse smartphone in India on march 14. The device will be an Amazon Exclusive and will most likely be the Redmi 5 which is already available in China. It features a thin-bezel display with a metal unibody design. It is powered by an octa-core Qualcomm Snapdragon 450 processor and comes with a 5.7-inch HD+ screen with a resolution of 1440x720 pixel.

On the rear, it is equipped with a 12MP rear camera with a 1.25-micron pixel sensor and on the rear it comes with a 5MP sensor with a soft tone selfie light and Beautify 3.0 feature for “enhanced” portrait shots. The device is powered by a 3300mAh battery, sports a rear-mounted fingerprint scanner and runs on MIUI 9 atop Android 7.1 Nougat.