The Moto E5 Plus that was first unveiled in Brazil in April this year. It will be the third Moto phone to launch in India this year. The phone packs a massive 5,000mAh battery and a taller 18:9 panel. 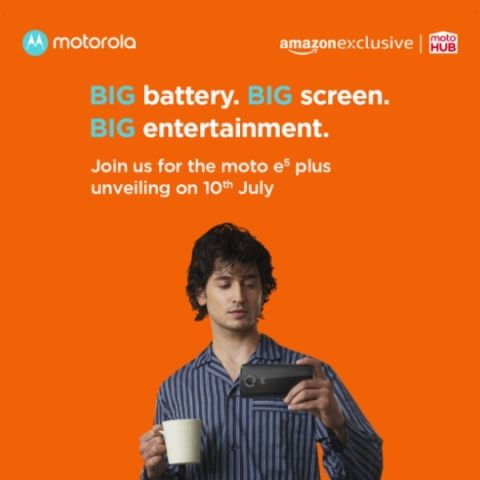 Moto has been teasing a big-battery phone for some time now on its social media channels and finally, we have a confirmation of the launch of the Moto E5 Plus. The phone was launched alongside the Moto G6 series in Brazil earlier this year and will be coming to India on July 10 through Amazon.in. Moto posted a short one-minute video summing up the history of the Moto E series with the caption “big battery, big screen, big entertainment”.

The Moto E5 Plus is the latest refresh of the Moto E lineup. The series was introduced as an entry-level offering with basic hardware. The Moto E5 Plus in that sense does have a lot in common with its mid-range siblings, namely a taller 18:9 panel and a massive 5,000mAh battery. The battery life of Moto E phones have been stellar over the years and it will be interesting to see how long the new Moto E5 Plus lasts.

The biggest feature of the Moto E5 Plus is the 5,000mAh battery while the biggest upgrade in the phone is the 18:9 LCD panel of HD+ resolution. The phone runs on near-stock Android 8.0 Oreo with Moto’s suite of productivity-enhancing features and is powered by a Snapdragon 435 chipset coupled with 3GB of RAM and 32GB storage. Thankfully, the memory can be expanded up to 256GB via a microSD card. The phone supports 15W TurboPower charging that can reportedly provide six hours of usage in 15 minutes of charging.

The Moto E5 Plus is priced EUR 169 in Europe which roughly converts to around Rs 13,500. If that is indeed the case when it launches in India, the E5 Plus will face heavy competition from the likes of the Realme 1, The Xiaomi Redmi Note 5, The Asus Zenfone Max Pro M1 and more.

Pricing will be the key to the success of the phone. Moto has maintained an under-Rs 10,000 price for Moto E phones so far, although it did get hiked from its entry-level pricing after the introduction of the Moto C last year. It remains to be seen where the Moto E5 Plus fits in the scheme of things for Moto’s plans in India this year.