The ‘really cool’ engineering responsible for the seams in the steel band around the iPhone 4 – seams that separated antennas – did not envision users holding the device in their palm. The bottom left seam, separating the UMTS/GSM antenna from the Bluetooth/WiFi/GPS antenna, when covered by your hand, causes a significant drop in signal reception quality.

This issue, when brought to the notice of Steve Jobs by a disappointed user, was countered with a Jobsian short, but very dismissive reply:

User: I love my my new iPhone 4 (nice work) but when I put my hand on the steel bands I lost all reception. It appears to be a common issue. Any plans to fix this?
Jobs: Non issue. Just avoid holding it in that way.

Apple then followed up this with a official response, one that defended the iPhone 4 by saying all phones will suffer a loss in signal quality, if certain spots of antenna sensitivity are gripped. It’s a pity that the very spot that causes a problem on the iPhone 4 is one that has been shown being held by innumerable Apple iPhone 4 advertisements, and Jobs himself held it problematically at its launch.

Gripping any phone will result in some attenuation of its antenna performance, with certain places being worse than others depending on the placement of the antennas. This is a fact of life for every wireless phone. If you ever experience this on your iPhone 4, avoid gripping it in the lower left corner in a way that covers both sides of the black strip in the metal band, or simply use one of many available cases. 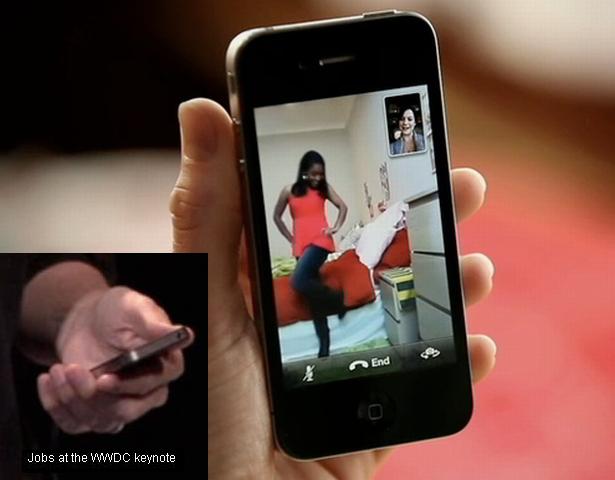 Possibly the most tragic (for Apple) part of the entire affair is that two (for now) of the self-developed technologies that it itself lauded, the Retina display and the marvel of metallic antenna body, are facing serious issues. This after all that testing; which in its long duration even resulted in some test units being lost.

A product recall is in order, especially after the flawed devices sold like hot-cakes, not a solution that asks users to cover one of the iPhone’s USPs. In the meantime, give out free cases.