Specifications of Qualcomm Snapdragon 670, 640 and 460 leaked

Qualcomm's three new SoCs are likely to make their debut at MWC 2018 next year.

Qualcomm has already unveiled its flagship Snapdragon 845 SoC for 2018 but there were little details about other SoCs in the 2018 lineup. That changes today as specifications of Snapdragon 670, 640 and 460 have leaked online. While the names of these three chipsets have popped up in earlier reports, this new leak gives a more detailed breakdown of the three.

Going by the specifications given in the leak, all three chipsets seem to be using Qualcomm’s own Kryo cores, which are derivative versions of ARM’s Cortex cores. The Qualcomm Snapdragon 460 SoC, for example, which will be replacing the current gen Snapdragon 450 in the budget segment phones. It features Kryo 360 Silver CPUs which are a derivative of ARM’s Cortex-A55 microarchitecture. The new SoC is suggested to be using an Octa-core setup with dual Quad-core clusters clocked at 1.8GHz and 1.4GHz. The chipset will be using an Adeeno 605 GPU along with a X12 LTE modem. The chipset will also support camera sensors upto 21MP. 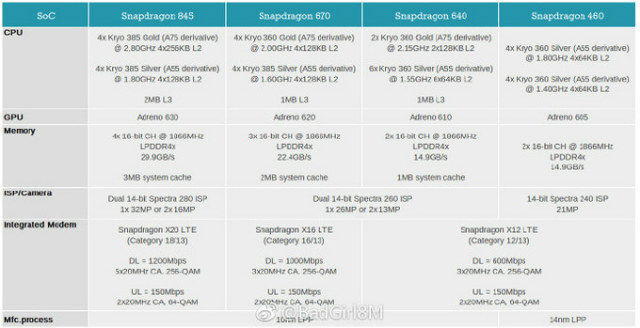 All these new SoC are likely to makes their debut next year at MWC and we may see them in phone thereafter.