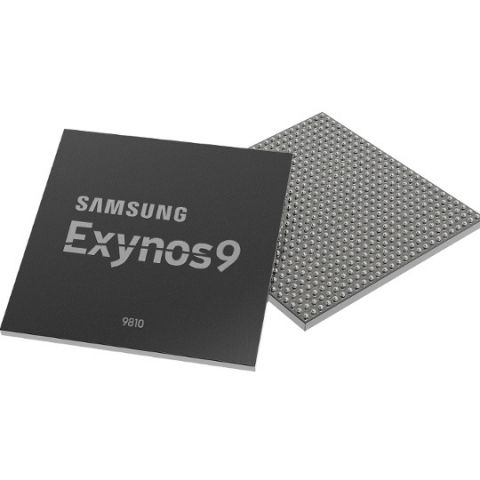 Samsung’s upcoming Exynos 9810 SoC, will feature a dedicated security chip to store your vital personal information such as facial, iris and fingerprint data. The new chip will also include neural-networking capabilities, just like most of its counterparts from HiSilicon, Qualcomm, and Apple. The Exynos 9810 SoC was announced earlier in November last year but did not disclose a whole lot of information about the SoC. The new Exynos 9810 SoC is likely to make its way into the company’s upcoming flagship phones which are due to launch this year. The Exynos 9810 is comprised of eight CPU cores, adhered to dual quad-CPU clusters.

Samsung is using a combination of self-developed Mongoose CPU cores with ARM’s Cortex-A55 cores. The four 3rd gen Mongoose cores (M3) are clocked at 2.9GHz, which is a good improvement in speed over last year’s 2.2GHz by the M2 cores on Exynos 8895. Samsung has achieved this by moving to its new 10nm LPP manufacturing process, which provides a 10 percent better performance and 15 decreases in power. On the Exynos 9810, the M3 cores are coupled with four Cortex A55 cores. Samsung hasn't disclosed the exact clock speeds on the A55 cores, but these new ARM CPUs are also a step up from the last year A53 cores used on the current gen Exynos 8895 SoC. Hence, Samsung claims that the multi-core performance has increased by forty percent, which is a huge claim to make.

Samsung Electronics’ Vice President of System LSI marketing, Ben Hur said, “The Exynos 9 Series 9810 is our most innovative mobile processor yet, with our third-generation custom CPU, ultra-fast gigabit LTE modem and, deep learning-enhanced image processing. The Exynos 9810 will be a key catalyst for innovation in smart platforms such as smartphones, personal computing and automotive for the coming AI era.”

Besides raw numbers and performance, the biggest update coming to next year Samsung flagships is AI support on the chip level itself. The Exynos 9810 will incorporate neural-network based deep learning technology. The company claims that this makes the devices powered by the SoC more secure, but will also help users to take better images. As mentioned that Exynos 9810 will also include a dedicated security chip which will keep you vital info separate.

The new SoC also brings enhancement on the multimedia front as it comes with an upgraded MFC (multi-format codec) and claimed faster and more efficient visual and image processing. The chip will allow the phone to take better low light images and capture, play videos in UHD at 120fps. Samsung says devices powered by the SoC can also make use of the enhanced colour fidelity to offer more immersive content.

As reported earlier, the Exynos 9810 will feature a new Cat.18 modem with speed going up to 1200Mbps. It is also the first modem of its kind to support 6x carrier aggregation (CA) and 256-QAM (Quadrature Amplitude Modulation) scheme making it better than what either of its competitors has to offer (Snapdragon 845 and Kirin 970). The modem also supports a 4×4 MIMO (Multiple-Input, Multiple-Output) and utilizes enhanced Licensed-Assisted Access (eLAA) technology.