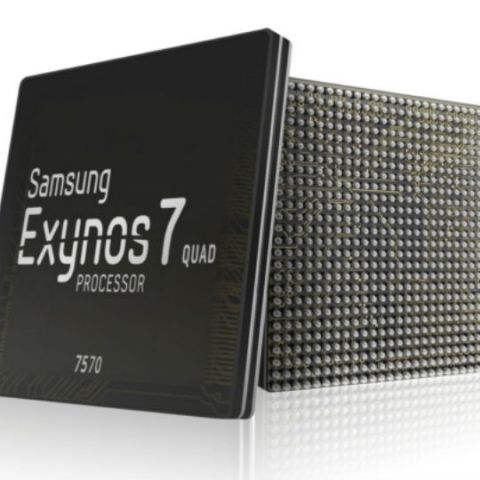 Samsung has unveiled a new chipset called the Exynos 7570 that is aimed at the budget smartphones and IoT devices. The processor is built using the 14-nanometer FinFET process and features four Cortex A53 cores. The company says that the new processor offers 70 percent improvement in CPU performance and 30 percent improvement in power efficiency as compared to its predecessor, that was built using the 28nm process. Samsung also notes that the Exynos 7570 has entered mass production, and is the first Exynos processor to fully integrate Cat.4 LTE 2CA modem and connectivity solutions such as Wi-Fi, Bluetooth, Frequency Modulation (FM) and Global Navigation Satellite System (GNSS) in one chip.

The Exynos 7570  supports screen resolutions up to WXGA, recording and playback of videos in Full HD, and an improved Image Signal Processor (ISP) for 8MP front and 13MP rear cameras. Further, Samsung says that it has reduced the size of the chipset by 20 percent, which lets manufacturers build slimmer phones.

The 14nm FinFET manufacturing process is currently used on high-end SoCs like the Exynos 8890, which powers the Samsung’s flagship phones like the new Galaxy Note 7, as well as the Galaxy S7 and S7 Edge smartphones.