CMR says Samsung is the top 4G smartphone vendor, while Lenovo A6000 the most popular handset in Q1, 2015.

4G market in India is heating up with more than 2.2 million devices shipped in Q1, 2015. Samsung has replaced Apple as the leading 4G LTE smartphone vendor in India, while Lenovo A6000 was the most popular handset in the quarter.

Overall LTE device shipments reached 2.2 million units of which smartphones accounted for 97 per cent of the 4G/LTE devices. Lenovo A6000 was the most popular handset among the 55 handsets shipped in the quarter. The research firm added that 47 per cent of 4G or LTE devices shipped into the country were exclusively available online for sale. In the 4G/LTE Datacard market was lead by ZTE with 77 per cent market share, followed by Alcatel 17 per cent and Huawei 5 per cent share.

Vikrant Singh, analyst at CMR Telecoms Practice, said: "Samsung made a jump from third spot to top spot mainly on account of the launch of new handset models like A5, A6 and S6. New brands entering this segment during the quarter were Huawei, BlackBerry and ZTE. The total number of players shipping 4G/LTE devices in the quarter was 19, up from 12 in the previous quarter. The total models of 4G/LTE handsets shipped during the January-March 2015 quarter were 55, with Lenovo’s A6000 leading with maximum units,” Vikrant concluded.

Faisal Kawoosa, Lead Analyst, CMR Telecoms Practice said the market more than doubled quarter-on-quarter and we will see this momentum continuing for at least a few more quarters. “Other than the need to appear distinctive in the market as well as move with worldwide industry trends, device vendors are also trying to create a ‘cult’ follower-ship in the emerging Broadband Wireless Access technology space,” he said.

"With the kind of expected paradigm shift in quality as well as types of services after RJio goes 'live', device vendors are busy showcasing their competencies in the 4G/LTE space, not only to have an early mover advantage, but also to position themselves as reliable vendors in the space," he added. 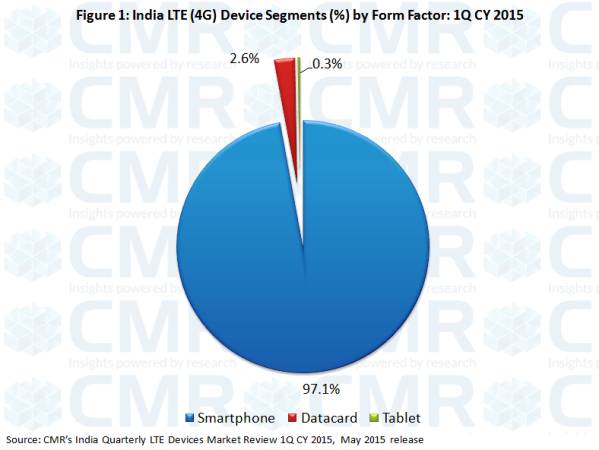