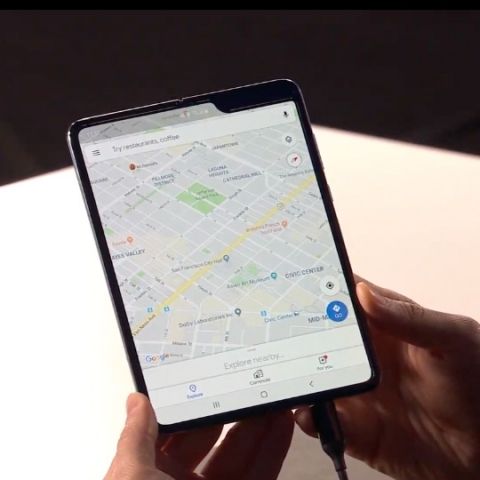 Samsung may not be allowing journalists to see and touch the Galaxy Fold, but a 4-minute long video released by the company gives us the best look at the futuristic smartphone. The footage is essentially a 4-minute long silent B-roll but it does show the foldable phone from just about every angle, and also while it’s being used.

The video reveals more than what Samsung showed during its keynote event in San Francisco where it launched the Galaxy S10 devices along with the Galaxy Fold. While Samsung mostly kept the Galaxy Fold in the dark with only one live demo of the phone, the video gives a well-lit view of the phone from up close. A range of close-up shots also show the hinge of the Galaxy Fold, the phone mode and the tablet mode. It’s evident there’s a slight gap along the hinges when it’s closed.

Apart from the phone, Samsung also showed how the apps will look like on the large screen. The company did show a demo of how Google Maps adapts from the small screen to the larger display. The video now gives a glimpse into how Instagram, Netflix and Google Maps work. We also got a look at the cameras in phone and tablet mode.

Furthermore, the large tablet display will also offer an immersive gaming experience as seen in the video while the USB-C port can be used to connect the phone to a bigger display to run Samsung DeX for a more desktop-like experience.

The Galaxy Fold uses a 7.3-inch Infinity Flex display that lets the screen to fold along the hinges. When folded, the Galaxy Fold uses a separate 4.6-inch HD+ flanked by thick bezels to display content. When unfurled, the phone opens up to a QXGA+ resolution panel with 4.2:3 aspect ratio. It can be folded and put into a pocket.

Samsung has priced the Galaxy Fold at $1980 (roughly Rs 1,40,352) and plans to start shipping from April 26th. Huawei also launched it’s own take of a foldable phone, the Mate X which will also go on sale in summer, priced at 2,299 euros (roughly Rs 1,85,078). Oppo also showed off a foldable phone concept while Xiaomi also previously spoke about its plans of making a foldable phone. Clearly, 2019 is going to be an exciting year for smartphones now that they have finally unshackled themselves from the boring old form factor.