Samsung Galaxy A9 with four main cameras expected to launch at 2:30 pm today: How to watch livestream, specs and all you need to know

The Samsung Galaxy A9 (2018) is rumoured to feature a wide-angle, a telephoto, a main RGB sensor and a depth sensor on the back. 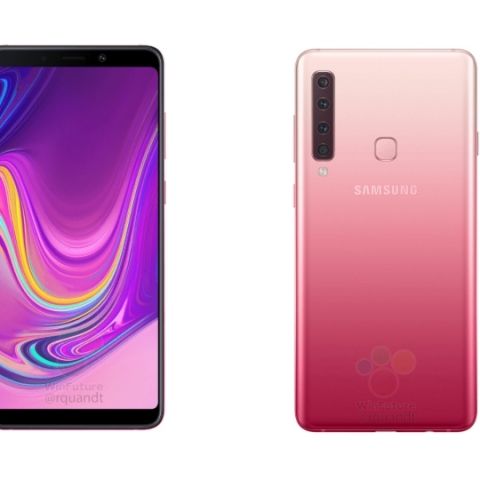 Samsung recently jumped on the triple camera bandwagon with its Galaxy A7 (2018) and it seems to be poised to take things further. The company will launch a new smartphone at an event in Kuala Lumpur today and it is expected to be the Samsung Galaxy A9 (2018). If rumours are to be believed, we might get to see Samsung’s first smartphone with four rear cameras. Leaked images of the handset suggest that the four cameras will be vertically stacked and frequent tipster, Evan Blass has also leaked the camera configuration details of the upcoming device ahead of the launch.

Samsung Galaxy A9: How To Watch Livestream

The Galaxy A9 launch event will be livestreamed at 2:30 PM IST on October 11 on Samsung India Newsroom. You can click here to watch it.

Samsung seems to be taking a different approach by equipping one of its mid-range smartphone with more cameras. The Galaxy A9 could also be released along the same lines as it’s leaked specifications tip at yet another mid-range handset, but with something fresh in terms of optics. The smartphone has also been spotted on Geekbench and the listing suggests that it could be running on Qualcomm Snapdragon 660 SoC with 6GB RAM and Android 8.0 Oreo. It scored 1609 and 5844 in single and multi-core tests respectively. The smartphone could feature 128GB of internal storage and might be backed by a 3800mAh battery. 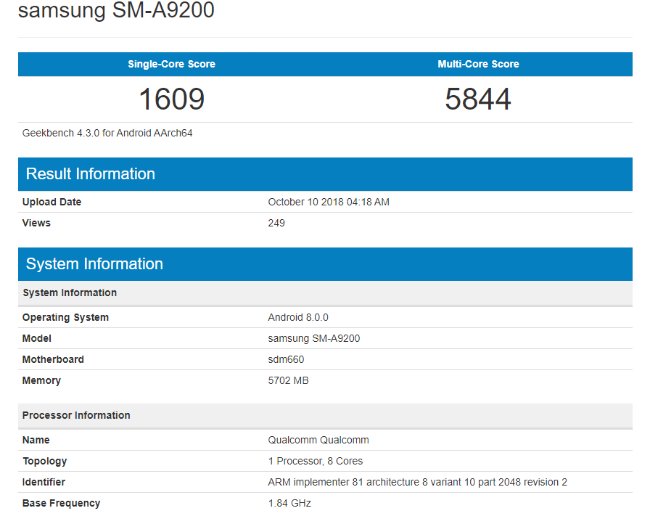 The smartphone is tipped to feature a 6.3-inch HD+ AMOLED display, with an 18:9 aspect ratio, sans a notch. The device’s leaked images via winfuture.mobi tip at slim bezels on the sides of the display and standard bezels on the top and the bottom. The power and volume rockers can be seen on its right edge and there’s another button on the left, whose purpose is unknown currently. It could be a dedicated Bixby button and if this is the case, it would be a first for a mid-range Samsung smartphone.

Coming to the phone’s optics, the leaked image by Blass suggests that it could feature an 8MP camera with a f/2.4, 120-degree ultra wide lens. The second 10MP sensor is said to be paired with a  f/2.4, 2X optical telephoto camera and there might be a 24MP main camera with f/1.7 aperture lens. While the new LG V40 ThinQ also uses the same lens configuration and one might think that it’s enough, Samsung seems to think otherwise as there is also a 5MP depth-sensing camera with a f/2.2 aperture. We will surely test out how the Galaxy A9 with four cameras stacks up against its competitors. 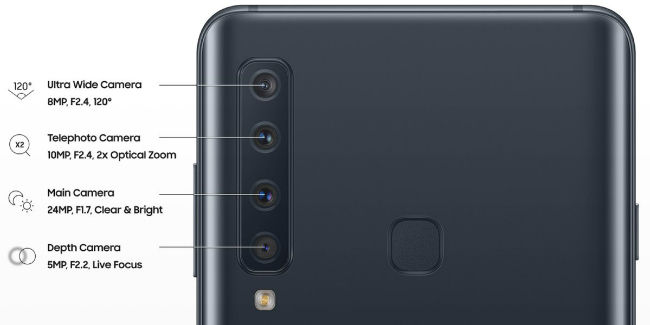 The Samsung Galaxy A9 is rumoured to be priced around Rs 40,000. Going by the configuration the device might get, it seems slightly high as most Snapdragon 660 powered phones are priced between Rs 20,000 - 25,000. However, as this is a rumoured price, we suggest that you take it with a pinch of salt.