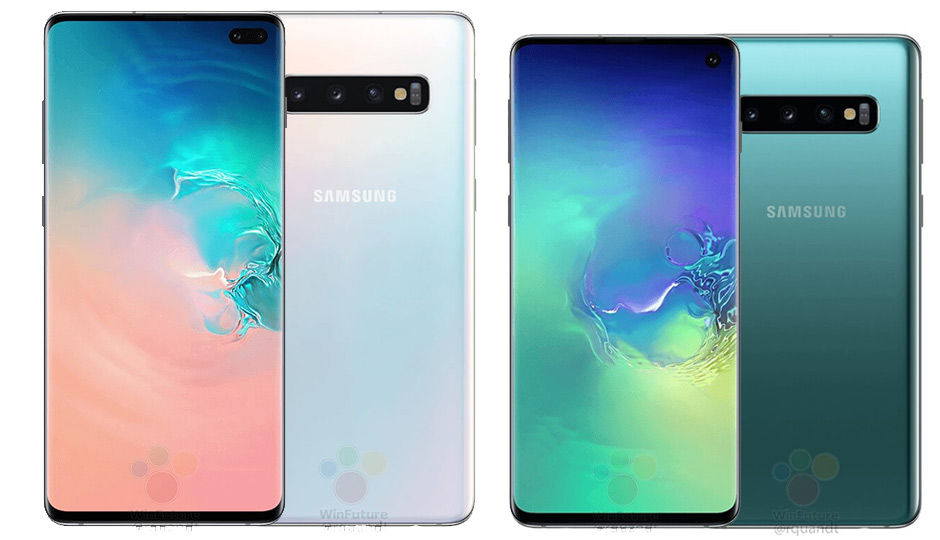 We are just a few days away from the launch of Samsung’s flagship devices for 2019, the Samsung Galaxy S10(₹ 46500 at amazon) and Galaxy S10+. Therefore, leaks of the two phones are in full swing and with just a few days left for the final reveal, it turns out, alleged press renders of the device have leaked, revealing the design in full.

The design reveals that Samsung has managed to really narrow down the top and bottom chins by moving the front facing camera into the display. Additionally, it appears that the company is getting rid of its Iris scanner technology so as to reduce the clutter on top. In its place, the Galaxy S10 and Galaxy S10+ will utilise an in-display fingerprint sensor. This is further corroborated by the fact that there is no fingerprint scanner on the back, as shown by the press renders. Looking at the back, we also see a triple camera setup on the back. Interestingly, the renders show three colours for each variant; a black and two new finishes of green and the already seen Polaris Blue. The other interesting revelation from the press renders is the corners of the devices, which appear to have a sharper edge in comparison to the S9 and S9+. The Samsung Galaxy S10 and Galaxy S10+ will sport Qualcomm’s newest Snapdragon 855 in some markets and the company’s own Exynos 9820 processor in other markets. Rumours suggest that there may be a variant of the S10+ which will sport a whopping 1TB of storage. This is substantiated somewhat by the fact that Samsung just announced the production of its 1TB UFS 3.0 storage chip.