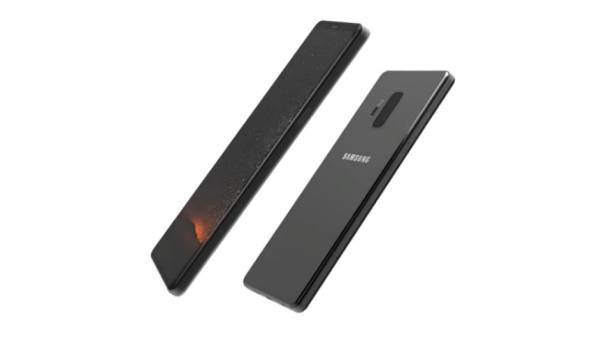 The smartphone is seen with a rectangular candy-bar design and features rounded corners with a thin-bezel display.

After unveiling its flagship Galaxy S9 and S9 Plus phones, the company is hard at work on the upcoming Galaxy Note 9 smartphone. Currently, there are no images or leaked renders of it which hint at its design, but a graphic designer from DBS Designing, Muhsin M Belaal Auckburaully, has created a concept video of the device. The render is based upon the current market trends takes into account how the company progresses with its products design. In the video, the smartphone features a rectangular candy-bar design and comes with rounded corners. It is seen in blue, black, silver and gold colour variants and the S-pen is also there, in matching colours. As the video is made using the rumours going around, the smartphone is also shown featuring an in-display fingerprint reader and even thinner bezels as compared to the current S9 series of devices.

The Samsung Galaxy Note 9 is expected to launch in August 2018 and the smartphone was recently spotted on Geekbench as well. As per the listing, the alleged Galaxy Note 9 features a model number SM-N960U and is powered by the Qualcomm Snapdragon 845 SoC, which is also equipped in the company’s current flagship Galaxy S9 and S9+ smartphones, along with 6GB RAM. The Galaxy Note 9 scores 2190 and 8806 in a Single-core and multi-core performance benchmarks respectively. It’s interesting to note that the Samsung Galaxy S9+ which we tested is powered by the Exynos 9810 SoC scored 3769 in single-core and 8938 for multi-core performance tests. If the Geekbench scores for the Galaxy Note 9 with Snapdragon 845 is to be believed, then it scores lower that the Galaxy S9+ with Exynos 9810 SoC. The Samsung Galaxy Note 9 is also expected to launch running on the latest version of Android 8.1 Oreo and the listing suggests the same.

The render video of the smartphone does tip at an in-display fingerprint sensor, but recently Ming-Chi Kuo, the KGI analyst said that the device will not feature it. There are also rumours that the smartphone could pack a larger battery and come with Bixby 2.0, the second iteration of the company’s digital assistant.