Samsung Galaxy Fold pre-orders start on April 26 in Europe, will be available from May 3 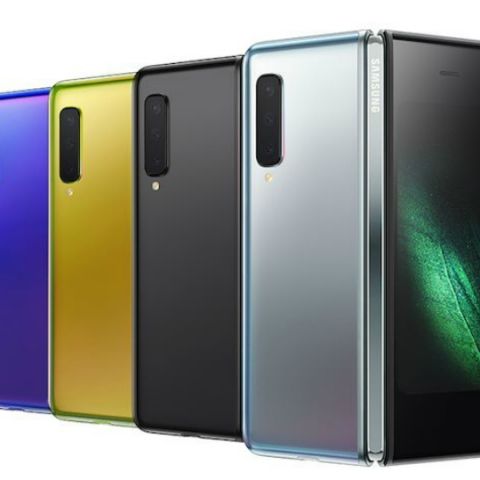 The Samsung Galaxy Fold will go on sale on April 26 in the US and South Korea, and at the same time Samsung will be opening up pre-orders for the foldable device in 15 countries in Europe which include - France, Germany, UK, Italy, Spain, Norway, Sweden, Denmark, Belgium, Netherlands, Finland, Austria, Romania, Switzerland and Poland. The phone will start shipping from May 3 in Europe.

The Galaxy Fold was unveiled at a Galaxy Unpacked event in San Francisco back in February and it’s the first such device from Samsung. The Galaxy Fold features a flexible AMOLED panel that unfolds into a 7.3-inch screen with 16:10 aspect ratio. On the outside is another 4.6-inch AMOLED display of lower resolution. The display folds and unfolds using a proprietary hinge and there’s a total of six cameras on the body.

The Galaxy Fold will be priced at EUR 2000 in Europe which roughly converts to Rs 1,55,788 in India. It’s certainly expensive, quite expectedly, but considering this is the first phone of its kind from a big brand, maybe the price is justified? Those who pre-order the device will also get a new free pair of Galaxy Buds, Samsung newest truly wireless earbuds as well as a slim kevlar case along with a one-year damage cover via Samsung Care+.

Samsung is also offering the Galaxy Fold in multiple colours — Astro Blue, Space Silver, Martian Green and Cosmos Black. What’s interesting is that if you order from Samsung’s e-commerce site, you can get a made-to-order custom colour combination with a dark silver or gold-coloured hinge.

The Samsung Galaxy Fold is not the only device with a foldable display, however. It also has the Huawei Mate X for company, which as we recently saw in an hands-on session in New Delhi, it quite refined and offers a seamless experience of a phone that also doubles up as a tablet. The Huawei Mate X also trumps the Galaxy Fold in terms of screen real-estate and a hinge that makes the phone fold completely flat, unlike what we saw happen with the Galaxy Fold.

The Huawei Mate X will go on sale in Europe and China a later though, in June. It is reportedly at a retail price of $2,600, much higher than the price of the Galaxy Fold, and that’s likely because the Mate X also doubles up as a 5G-enabled device while the Galaxy Fold isn’t.