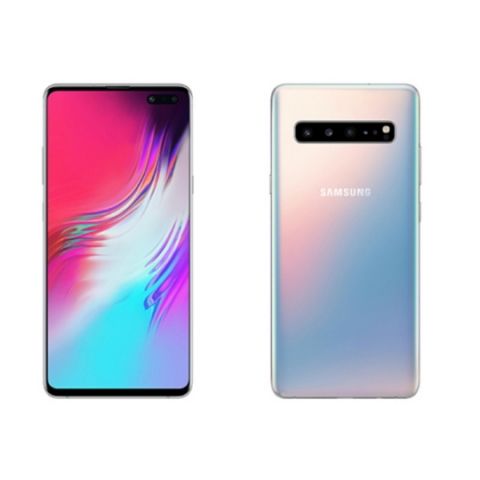 5G is officially here. Samsung became the first of many in 2019 to unveil a 5G-enabled device at the Galaxy Unpacked launch event in San Francisco which also saw the debut of Samsung’s first phone with a foldable display — The Galaxy Fold. There was the also the trio of Galaxy S10, Galaxy S10+ and Galaxy S10E in the mix and a bunch of wearables including Galaxy Buds, Galaxy Watch Active and more. But what Samsung claimed will set itself up for the next five years is the Samsung Galaxy S10 5G.

The Samsung Galaxy S10 5G integrates the Qualcomm Snapdragon X50  5G modem along with the 7nm Qualcomm Snapdragon 855 SoC. The modem is expected to draw more power, so Samsung also put a large 4,500mAh battery in it, the largest ever on a Samsung phone.

The Galaxy S10 5G is also a special-edition device that maximises the smartphone experience in every way. It features a giant 6.7-inch, where the Galaxy S10+ has a 6.4-inch panel. It’s the same Infinity-O Dynamic AMOLED display with HDR10+ certification and two cameras drilled into the display on the top right corner.

The phone offers 256GB of storage without the option to expand it though and has 8GB of RAM. Interestingly, Samsung skips out on the 12GB RAM variant on the phone which is there on the top-variant of the Samsung Galaxy S10 Plus.

The biggest USP in the phone is the internet speeds it can potentially offer when connected to a 5G network. To make the most of that, the phone "can download a full season of a TV show in minutes, play graphics-rich cloud games with virtually no lag, enjoy enhanced VR and AR experiences and stay in touch with friends and family via real-time 4K video calls.”

The Galaxy S10 5G also goes all out with the rear-camera setup. Along with the same triple-camera setup as the Galaxy S10 Plus, the 5G variant also includes a 3D ToF sensor on both sides. There’s one on the front and the back and can enhance the phone’s AR experience. The 3D depth sensing cameras also allow “Video Live Focus” and a “Quick Measure” app.

The huge 4,500mAh battery can be fast charged with a bundled 25W fast charger and also supports wireless and reverse wireless charging.

As expected the Samsung Galaxy 5G will be restricted to networks that have 5G connectivity. In the US, the 5G smartphone will be sold exclusively via Verizon. It’s also expected to come to AT&T, T-Mobile and Sprint as well. The 5G connectivity will be available in cities that has 5G-enabled. As of now, Verizon has not disclosed which cities with first experience 5G speeds.The phone will also be coming to other 5G-ready markets including France, Germany, Spain, Switzerland, UK and South Korea.

The price and availability of the Samsung Galaxy S10 5G was not announced at the launch. We expect more details about the phone to follow soon.