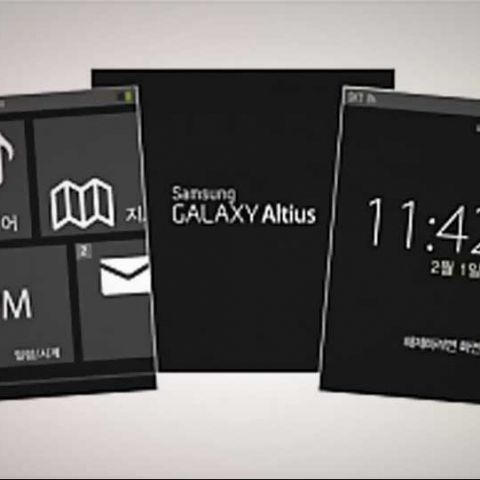 Hot on the heels of a rumoured Galaxy wristwatch from Samsung, a batch of leaked images of the device’s interface have made their way to the web. Of course, before the first Samsung Galaxy watch rumour, tales of an iOS wristwatch called iWatch were doing the rounds. Can a company take another to court for aping their leaks? Cruddy humour aside, it looks like the Korean manufacturer might be working on their own wrist-worn smart device, as suggested by the leaked photos.

The first thing we notice is the name of the product, with the mock-ups calling it the Galaxy Altius with the code name “Samsung-GA7”. The screenshots are all in Korean, so the text may be a little difficult to decipher (since none of us understand Korean), but the other screenshots suggest that the device will feature a music player and a tile-like user interface.

There also seems to be some sort of connectivity option built in, given the “2” notification on what looks like a “message” icon. Looking closer at the screenshots, we noticed that the icons at the edge of the screen are sort of cut off, suggesting a sliding UI, meaning the screen must be touch enabled.

The screenshots carry a 500x500 pixel resolution, suggesting the device will have a square aspect ratio, perfect for a wristwatch. All this information is far more than what we have on Apple’s “100 member team working on a device” claim, and we’re not surprised that Samsung is also developing something similar.

Since the leaks only contain shots of the UI, it could be that an actual device doesn’t even exist and that only the user interface has received a mock-up, to undercut the hype about Apple’s watch. We always recommend taking such rumours with a healthy dose of salt.