The TENAA listing also shows off the Redmi 7 in some images. As per the images, it will feature a gradient colour design on the rear panel and come equipped with a rear-mounted fingerprint sensor. 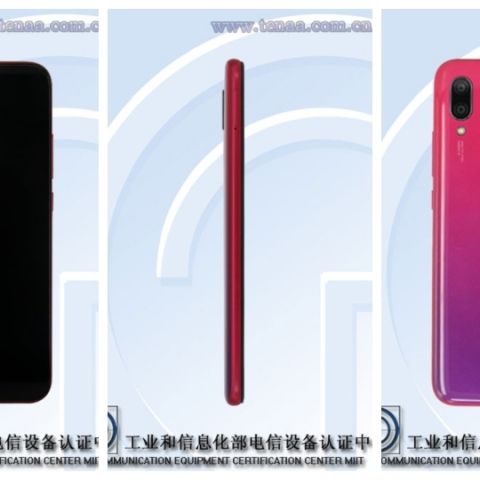 Xiaomi recently launched its Redmi Note 7 series of phones in India and is expected to launch the Redmi Note 7 Pro in China on March 18. However, the company is speculated to also introduce the Redmi 7 series of handsets soon, since the Xiaomi Redmi 7(₹ 7998 at amazon) has appeared in a TENAA listing. The device’s listing on the Chinese regulatory website not only reveals the phone’s image, but also some of its key specifications. As per the listing, the Redmi 7 has the model number M1810F6LE and comes with a 6.26-inch TFT HD+ display with a 1520 × 720p resolution. The image of the phone’s front panel suggests that it might sport a waterdrop notch design, same as the Redmi Note 7 series of handsets. However, the image is not clear enough to confirm if this is the case.

While the TENAA listing doesn’t reveal what processor is used on the Redmi 7, the SoC is rumoured to be clocked at 1.8GHz. It could also be announced in 2GB, 3GB and 4GB RAM variants and in options of 16GB, 32GB and 64GB of internal storage. The smartphone’s image suggests it will feature dual rear cameras with 12MP + 8MP sensors. There is no info on the front-camera setup. Additionally, the device is listed running Android 9 Pie and on a 3,900mAh battery. It is said to measure 158.6mm x 76.4mm x 8.9mm, weight 180g and come equipped with a rear-mounted fingerprint sensor. The image of handset’s rear panel suggests that it could feature gradient design similar to the Redmi Note 7 series.