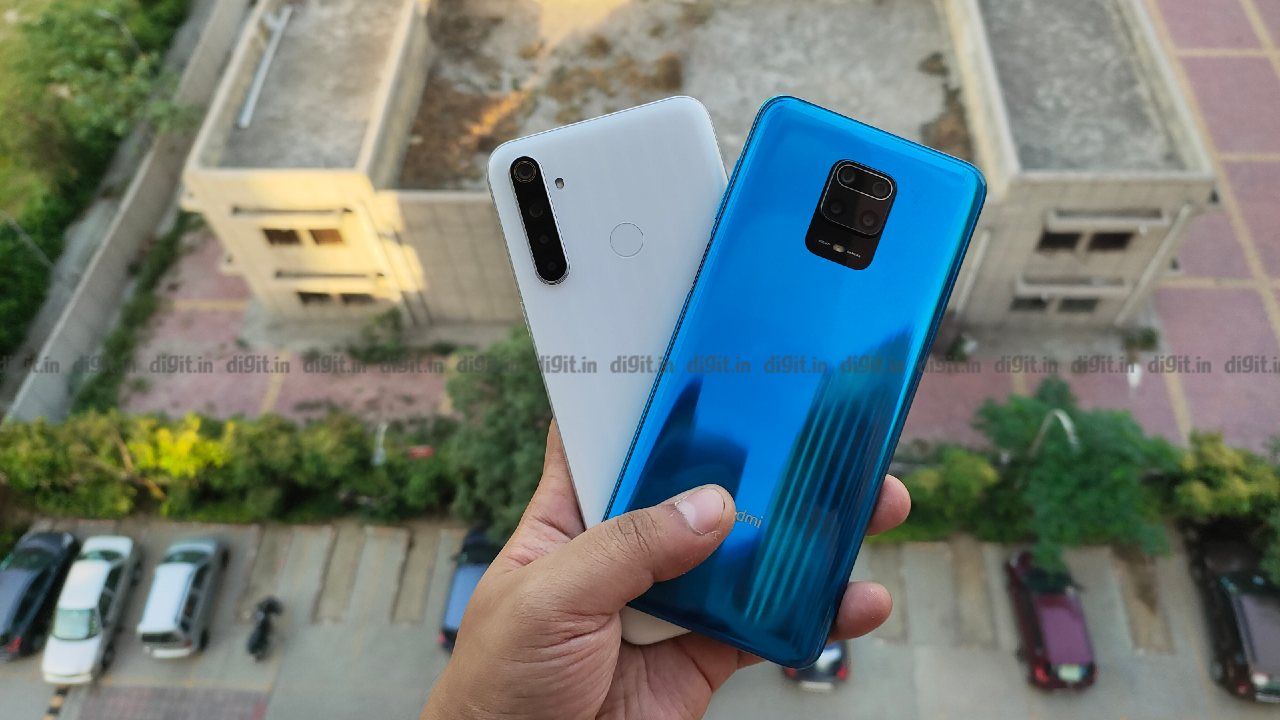 The REALME NARZO 10(₹ 12499 at amazon) is the first smartphone to run on the MediaTek Helio G80. Launched in the first week of May, the phone is going on its first sale today on Flipkart. The phone went through a couple of delays owing to the lockdown that was imposed to curb the spread of coronavirus in India, and will now finally be made available in the hands of the people. However, with the Oppo factory being shut again after six workers testing COVID-19 postiive, it's likely that production of the smartphone may have been halted again.

Realme Narzo10 going on sale today, check with your pin-code for delivery status

The sale for the REALME NARZO 10 will be live on both Flipkart and Realme.com. The Narzo 10 is priced at Rs 11,999 and comes in only one variant with 4GB RAM and 128GB storage. Previously, smartphone deliveries were only being allowed in districts marked orange or green zones by the Home Ministry. However, with the lockdown 4.0 in place, and with the government finally allowing non-essential items (including smartphones) to be delivered to areas marked red zones, Realme said it will be following the MHA guidelines and deliver the Narzo10 to customers accordingly.

We checked Realme.com by typing in pin codes of areas marked red zones and the website is indeed claiming a 7-14 day delivery time. We will update the story with more details as and when they become available. Flipkart, however is still following the older directive and deliveres to red zones are still restricted.

The REALME NARZO 10 arrives as a new lineup from the young brand, with one keyword — ‘Power’, with the budget smartphone going on its first sale today at 12PM. But it’s not the only one playing this game. The Xiaomi Redmi Note series has been the go-to smartphone in the mid-range segment for power users, and with a renewed focus on gaming, the new Redmi Note 9 Pro does offer power-packed specs. But don’t take the Narzo 10 for granted. There’s a new MediaTek Helio G80 under the hood, which is tuned for gaming, and the phone doesn’t skimp on the camera hardware too. It’s also worth seeing whether the Narzo 10, priced slightly lesser than the Xiaomi Redmi Note 9 Pro, can beat the latter at its game. With a similar target audience, we take a look at how the Narzo 10 squares up against the Xiaomi Redmi Note 9 Pro —

Let’s get the most obvious comparison numbers out of the way first. Synthetic benchmarks are a good way to look at how the two devices square up against each other. However, going by the recent shenanigans by MediaTek over juking the benchmark numbers by keeping the CPU running at peak speeds during the test, we shouldn’t rely too much on it. Nevertheless, here are the numbers we got — 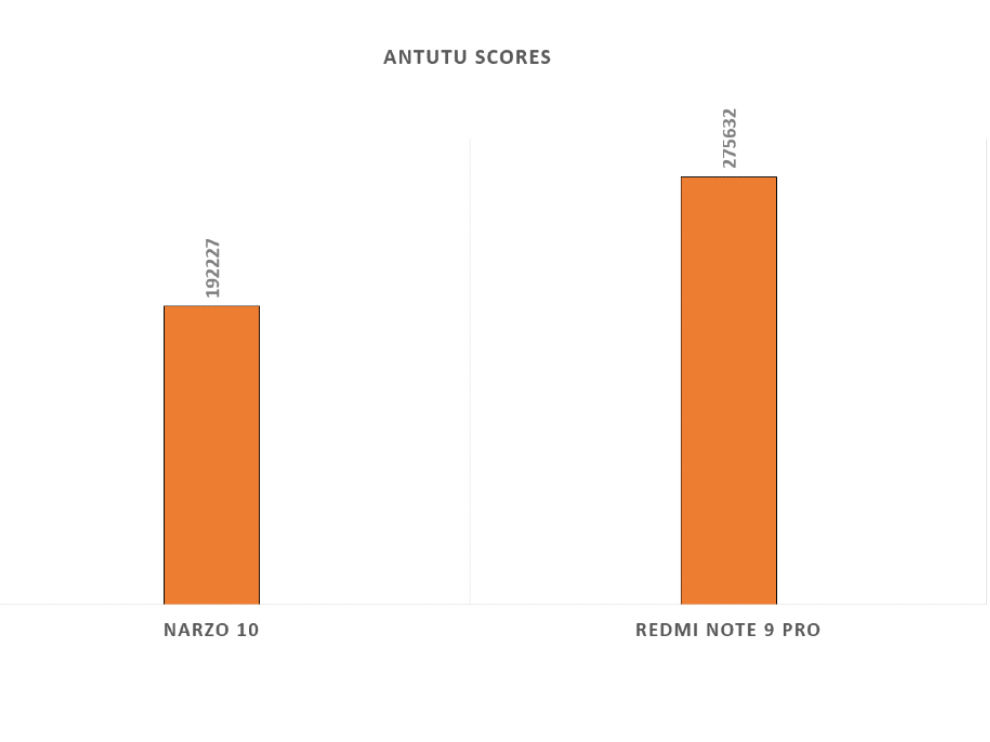 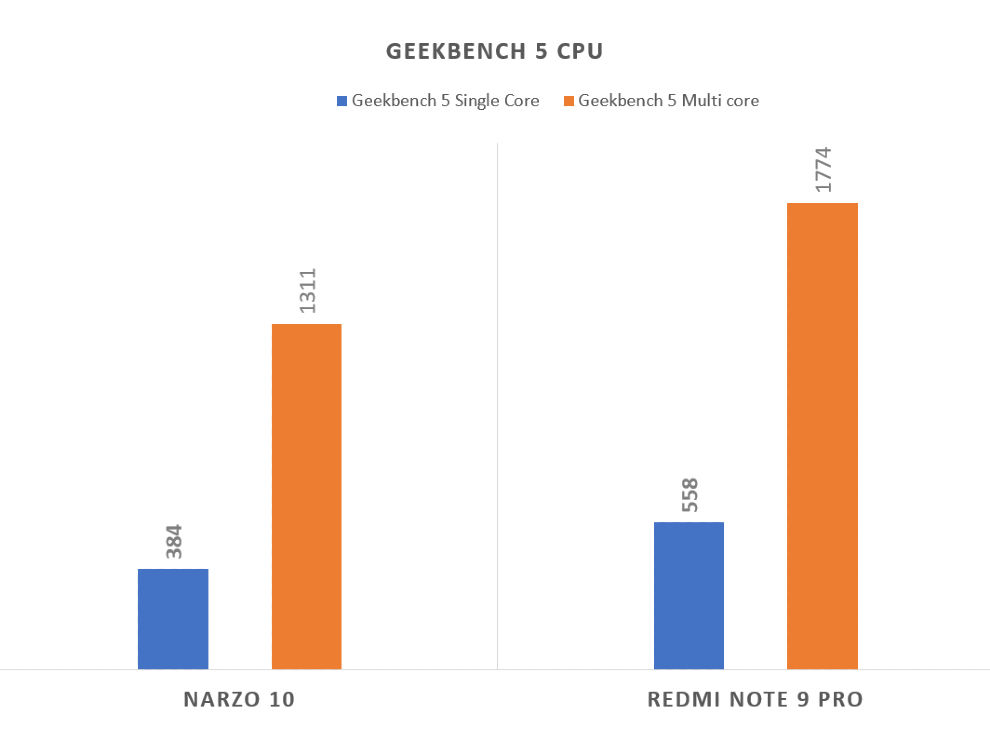 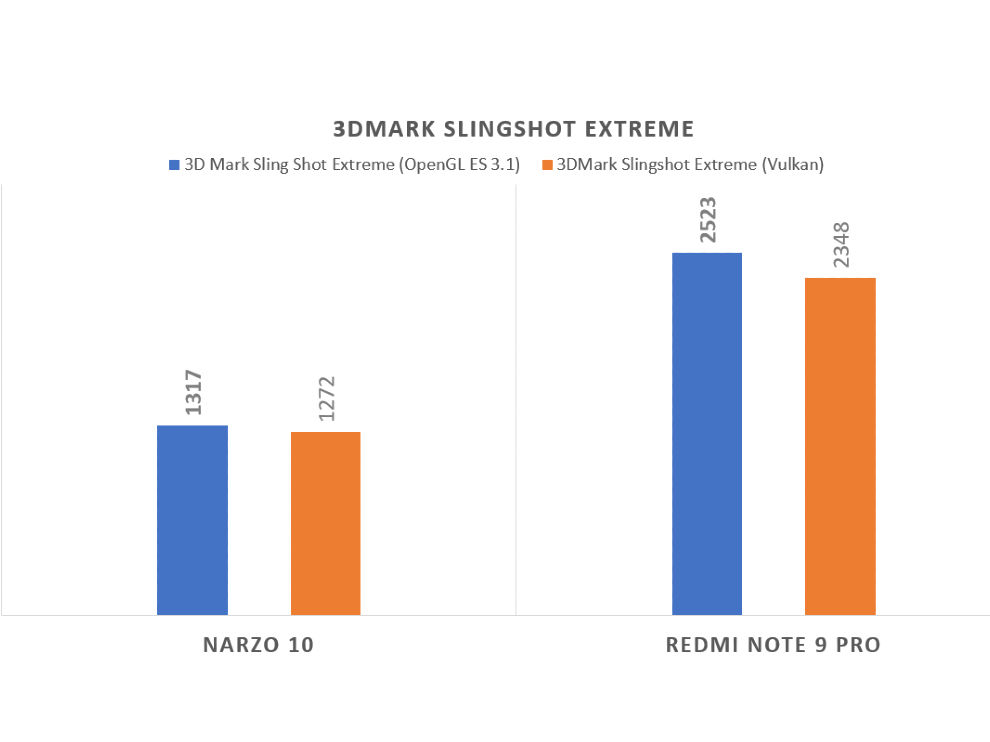 Looking at the numbers, the Redmi Note 9 Pro seems to be well ahead of the Narzo 10. Only on PCMark Work 2.0, did the Narzo 10 manage to beat the Note 9 Pro. We got curious and performed a GameBench session while running PCMark and the results were in line with our findings from the MediaTek benchmark cheating story. The phone is indeed keeping all eight cores clocked at peak frequencies despite the CPU load being minimal at times. The same behaviour is not observed while gaming or running any other app. These screenshots below will drive home the point. 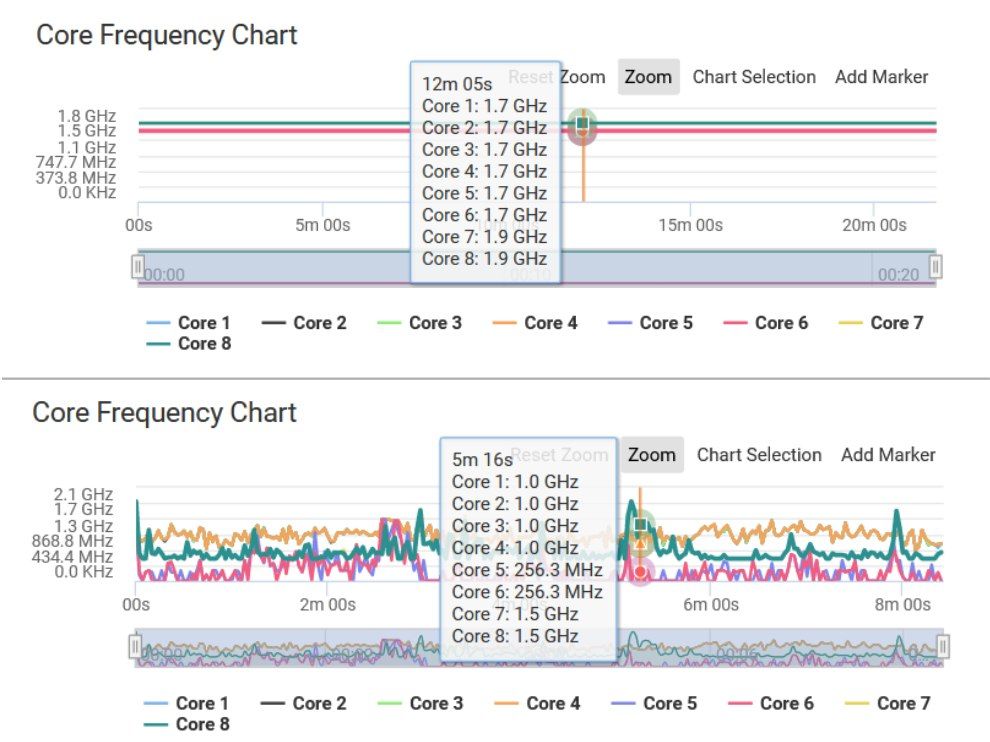 According to Realme, the biggest reason to get the Narzo 10 is for its gaming performance. The company believes the phone offers superior gaming in this segment. So we played the two most popular heavy-duty games on mobile — PUBG Mobile and CoD: Mobile on both the Narzo 10 and the Redmi Note 9 Pro and analysed the performance using GameBench. Here are the results — 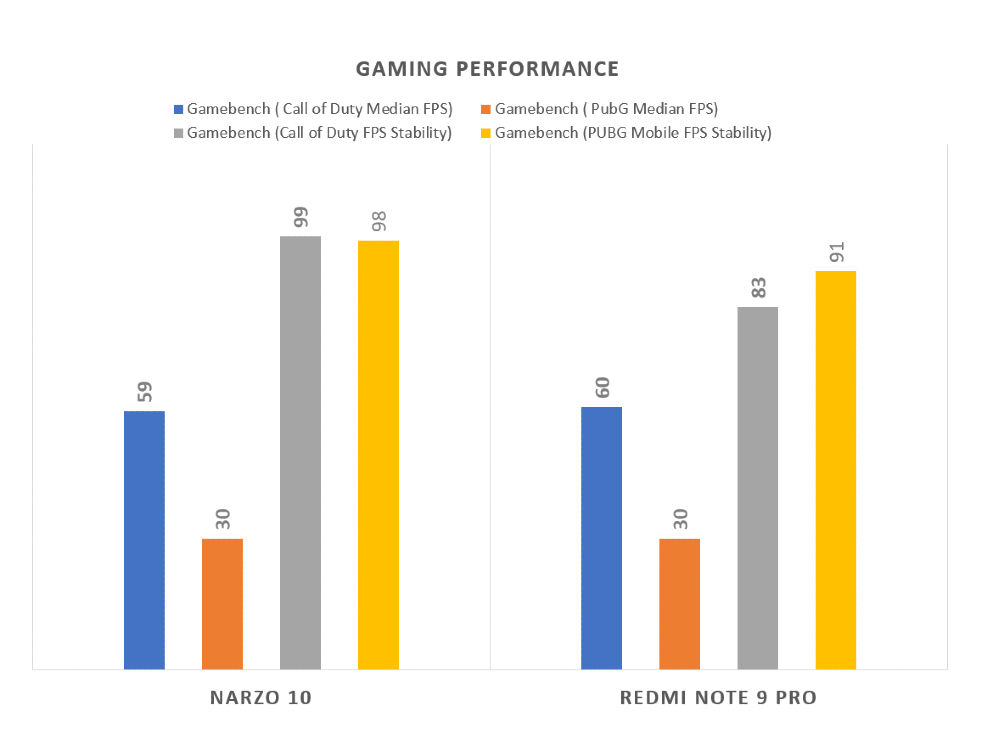 On PUBG Mobile, the Narzo 10 hits the 30 FPS mark and maintains the frame rate 98% of the time, indicating there was almost no drop in frame rates. The Redmi Note 9 Pro also hit 30 FPS but with a slightly lower 91% stability. However, looking at the frame rate distribution, the Narzo 10 does experience janks in the game every few seconds, but not drastic enough to impact gameplay. The Note 9 Pro’s gameplay is much smoother.

In conclusion, the Narzo 10 indeed lives up to the promise of good gaming in this budget, but that comes at the cost of lower graphics.

While MIUI has been around for some time, Realme UI is a new interface developed by Realme on top of Oppo’s ColorOS 7. Both couldn’t be more different, yet are quite similar. The difference lies mostly in the home-screen design, apart from a different take on icon design. MIUI 11 on the Note 9 Pro doesn’t offer an app drawer while the Realme UI gives you the freedom to choose.

Both interfaces are easy and intuitive to use. But if I had to choose one, I’d go for the Realme UI for the option of having an app drawer. However, both Realme and Redmi make it super easy to arrange apps into folders with multi-select. Dark mode is present in both and works system-wide. There’s the three-finger screenshot in both as well.

The Narzo 10 offers a high-performance mode which is absent in the Redmi Note 9 Pro. Interestingly, the Narzo 10 skips on the smart assistant which the Note 9 Pro has when you swipe left from the home screen. However, the Narzo 10 does come with a smart sidebar that can be invoked from any screen to get quick access to apps and shortcuts.

While there are a host of useful features on offer, both smartphones also flood your notifications with unsolicited ads and recommendations, some downright obscene as we have shown countless times. The only way to get rid of them is to block the notifications from appearing and to opt-out of recommendations from the Settings app. The variant of the Narzo 10 we got comes with 4GB RAM and 128GB eMMC 5.1 storage. On the other hand, the Redmi Note 9 Pro variant we compared the phone against comes with 6GB RAM and 128GB storage. The additional RAM does help when multitasking. We did notice the Narzo 10 slow down a bit when replying to messages from the sidebar while gaming, but it’s the storage module that may become a bottleneck in performance. The Note 9 Pro relies on UFS 2.1 which is a new and faster storage module as compared to eMMC 5.1. It’s something that most mid-range and high-end smartphones rely on. Quite expectedly, there was a significant difference in the read-write speeds when tested on the AndroBench app.

The 48MP primary camera on both smartphones takes 12MP photos by default using 4-in-1 pixel binning. Doing so improves the detail and sharpness. Both phones also rely on AI scene recognition and colour-enhancing algorithms. Here are the results — 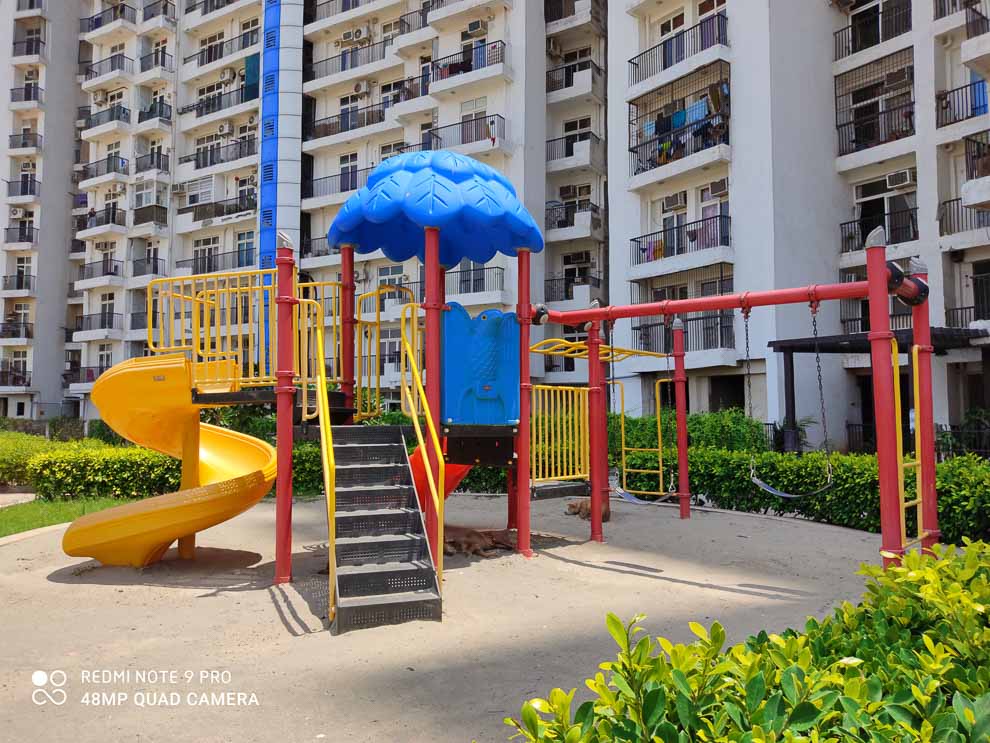 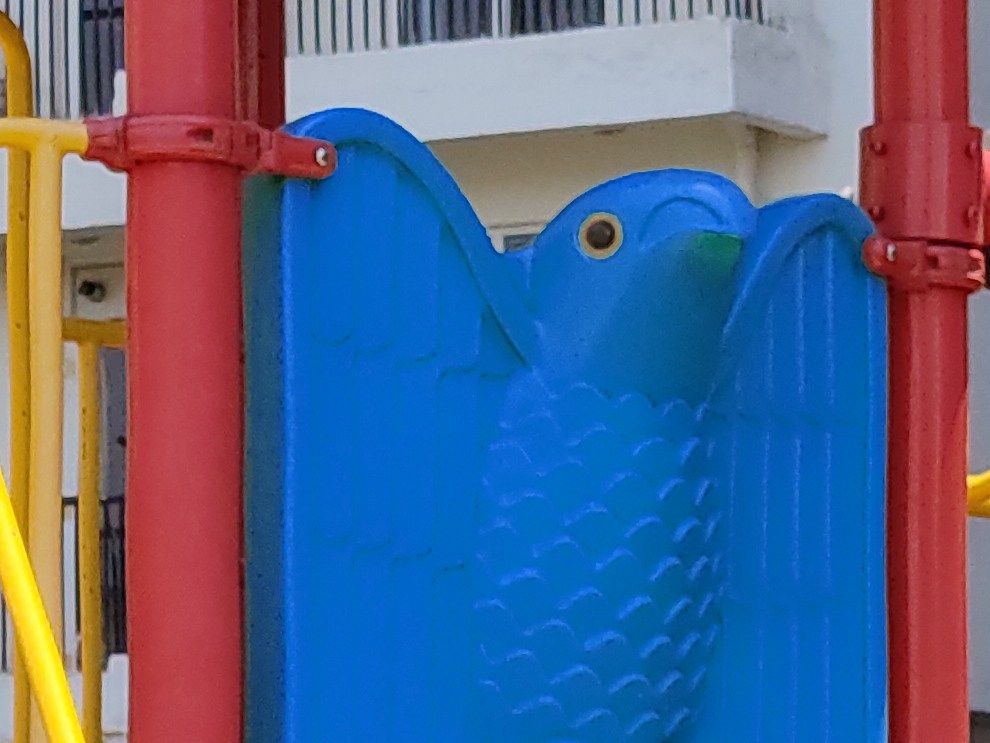 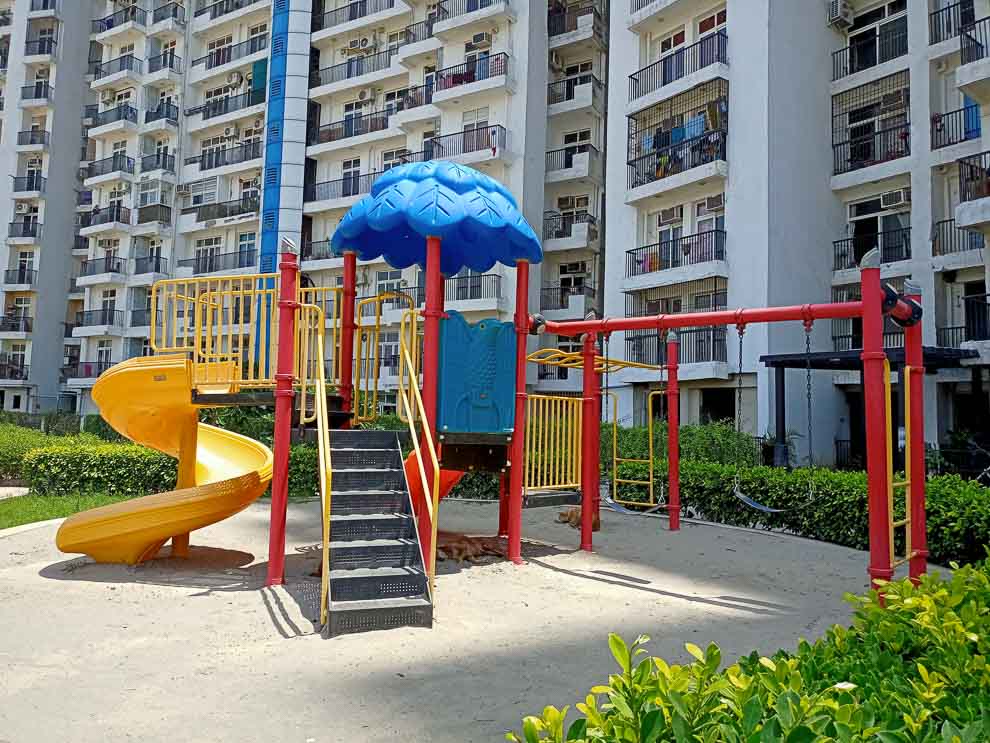 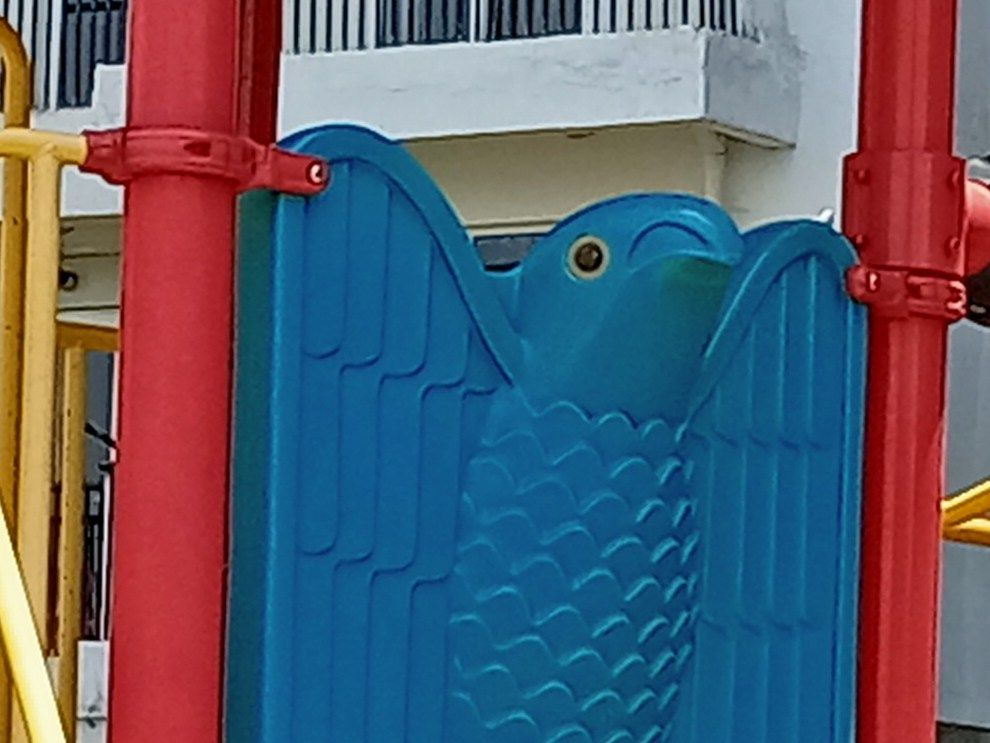 At 48MP high-res, the Narzo 10 seems to be doing a better job when it comes to the details. Both photos look quite sharp when zoomed out with the colours almost popping out, and the dynamic range is quite on point with the details around the shadows well represented. However, when looking at a 100% crop, it’s evident that the 48MP shot from the Narzo 10 carries more details than the Redmi Note 9 Pro. 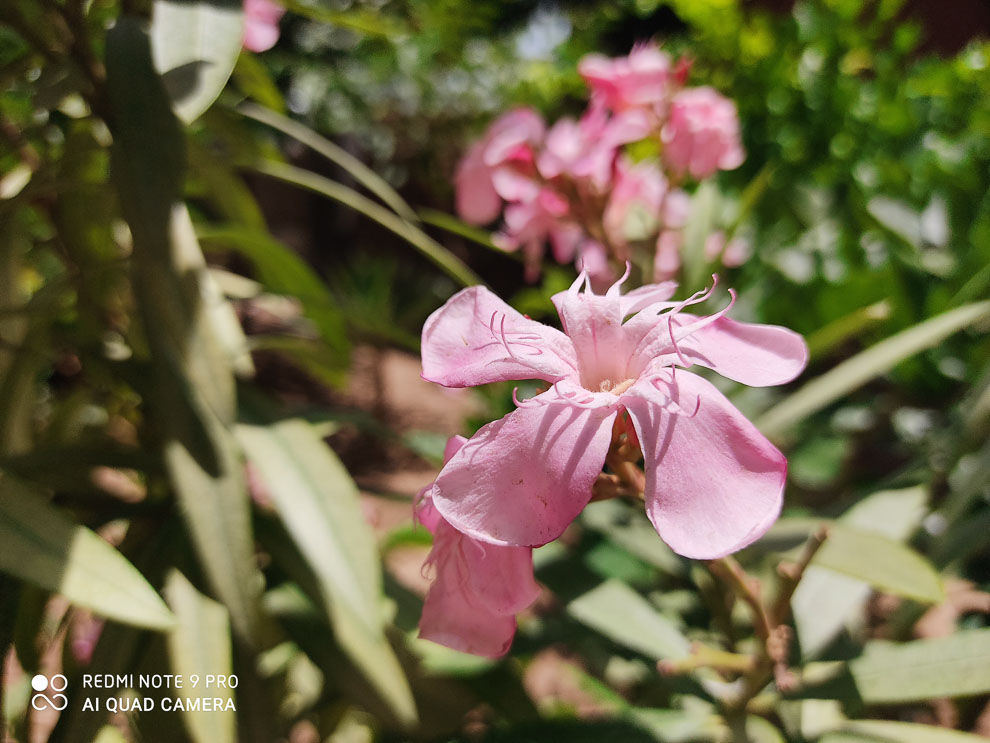 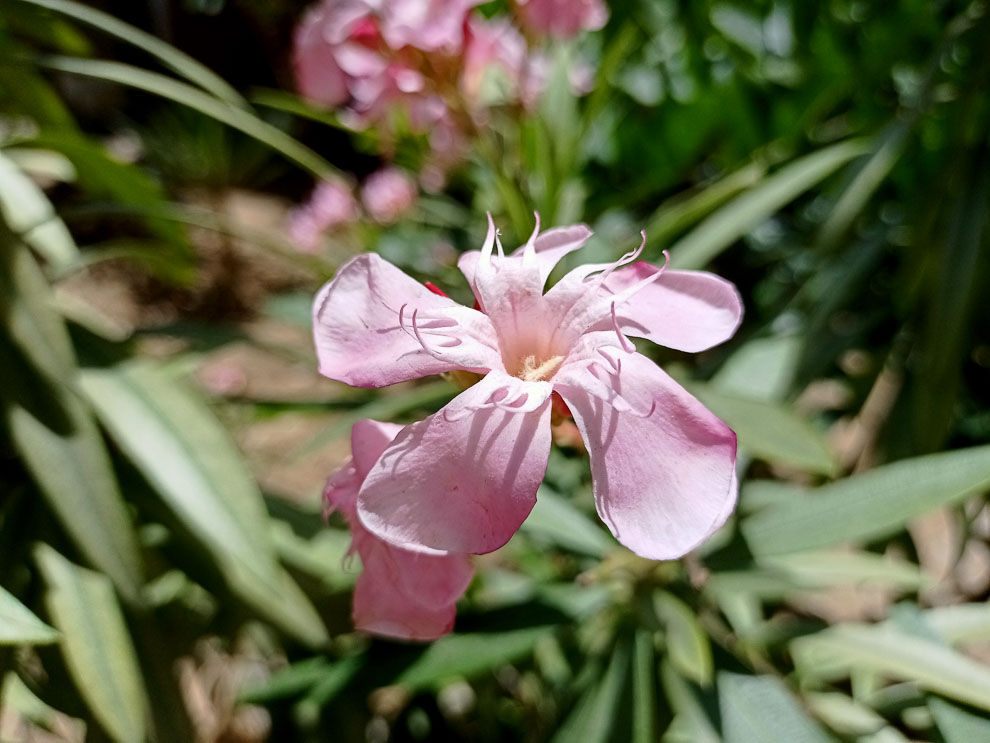 The 12MP shots, however, look more or less the same on both smartphones. Both were quick to focus on the flower and the background was blurred nicely thanks to a wide f/1.8 aperture. However, if we have to nitpick, we would choose the Redmi Note 9 Pro’s shot for better colours. 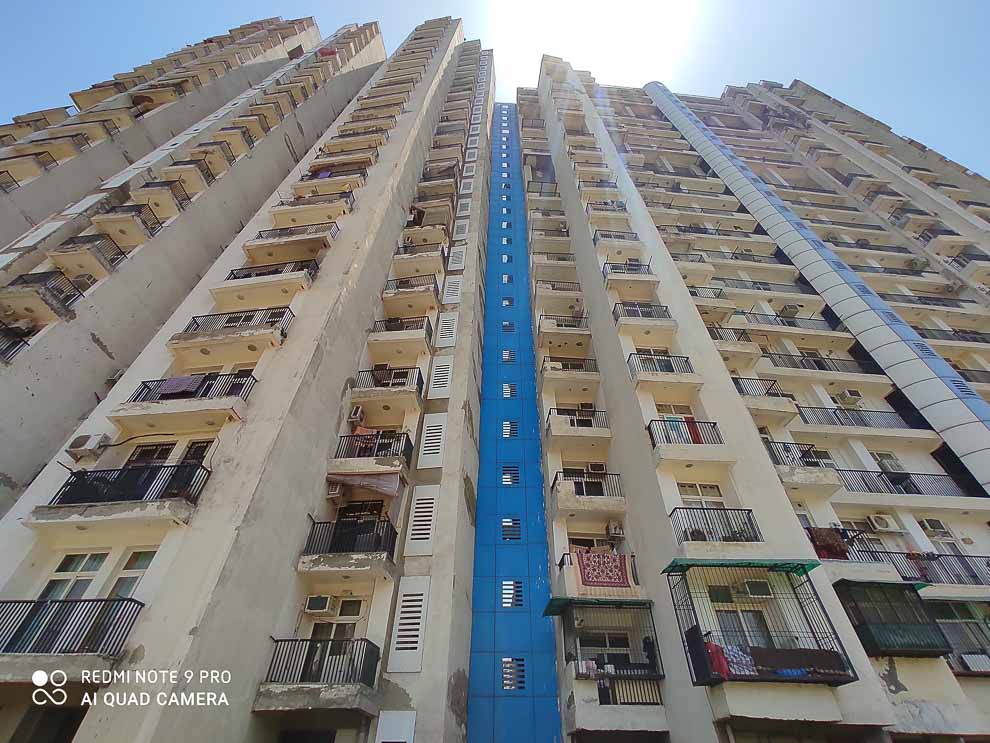 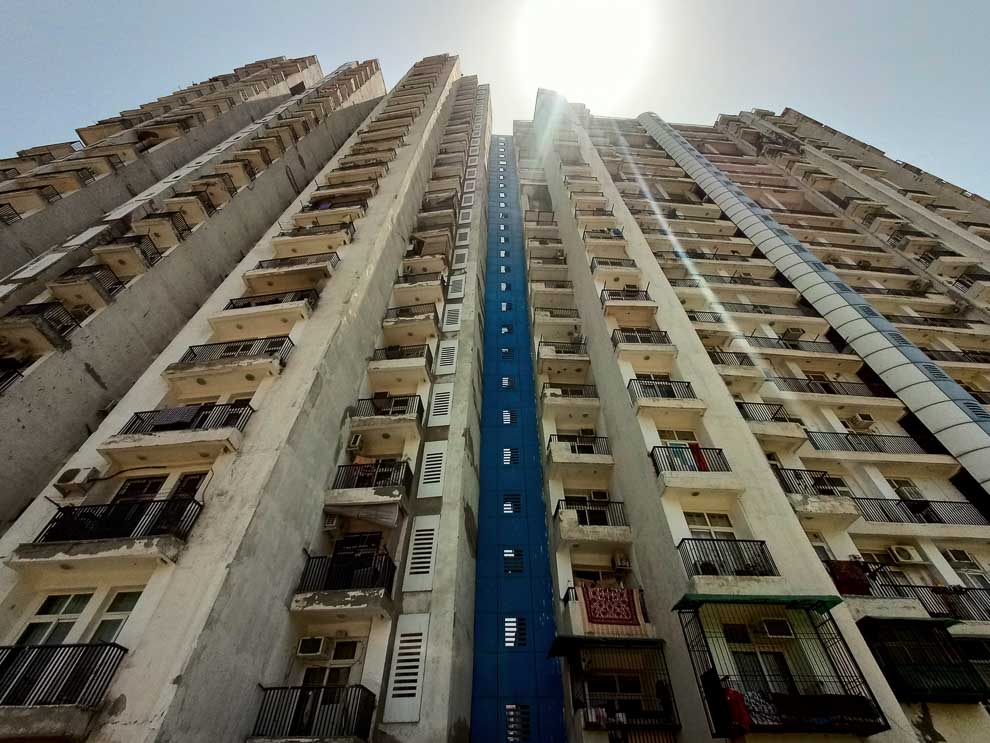 To test out the ultrawide lens, we decided to take a shot against the sun, particularly to check how much the dynamic range suffers. And by the looks of it, not much. The AI scene recognition kicks in nicely to enhance the details on the buildings, capturing the rough textures as well as the colour blue in the middle quite well. But once again, the Note 9 Pro’s image is actually the closest to the real thing, while the one taken from the Narzo 10 looks a bit dark with boosted contrast. Having said that, the oversharpening is quite evident on the Redmi Note 9 Pro. 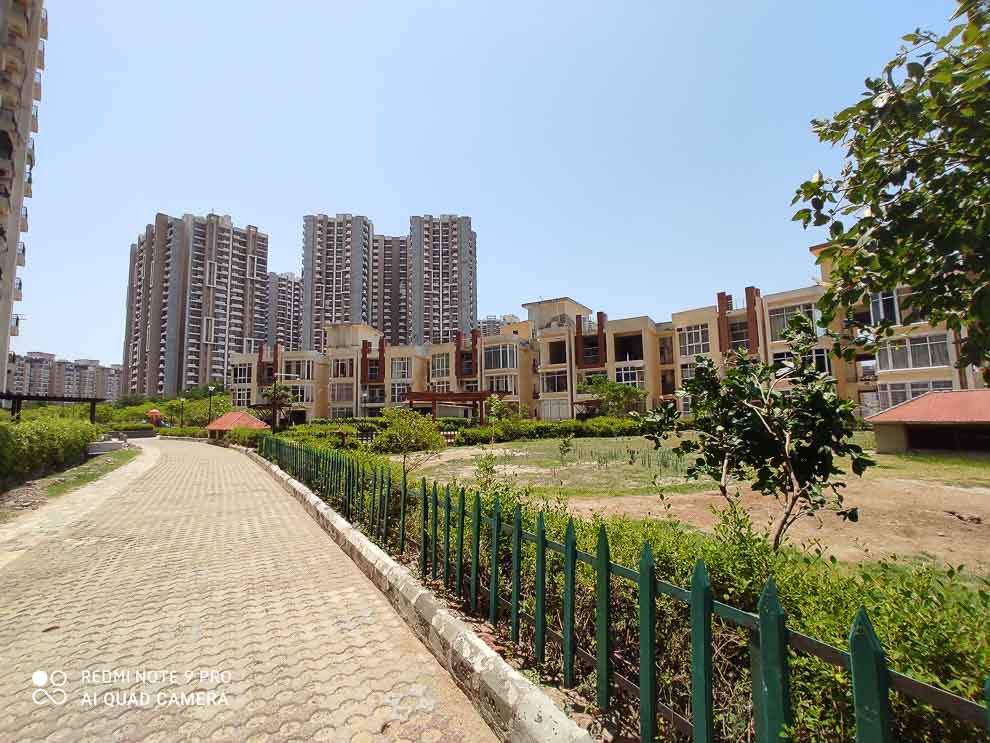 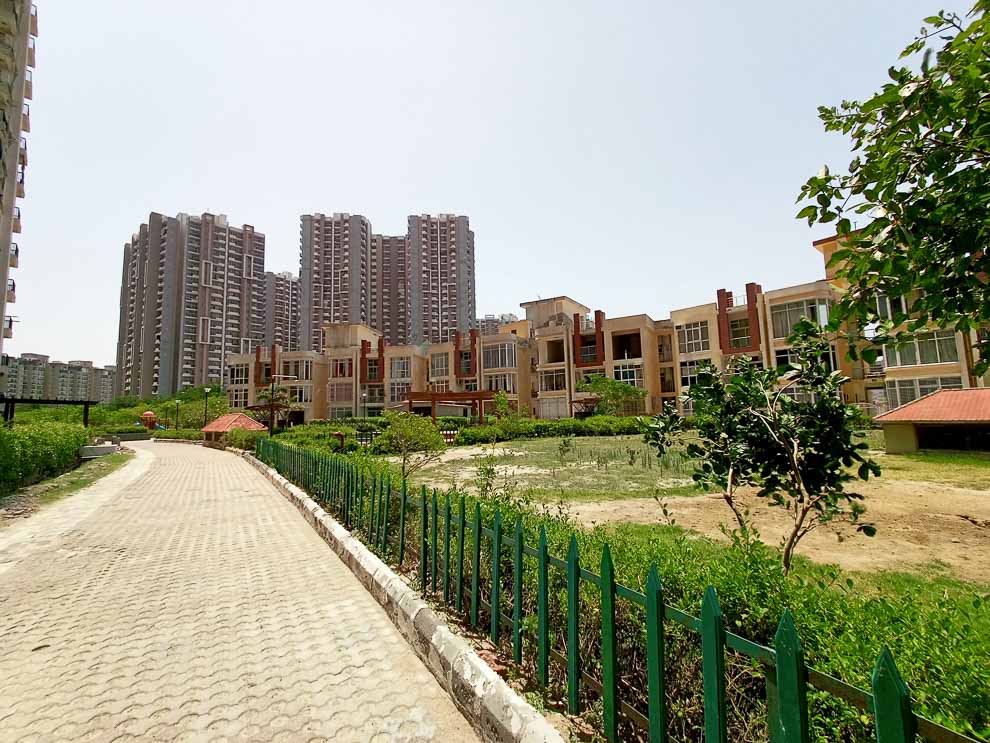 When shot with the sun behind us, the Note 9 Pro once again manages to bring out all the colours in the photo nicely, even the blue sky. The REALME NARZO 10’s sky looks washed out completely. As for the foliage and the far-away buildings, both phones produce similar details with the Note 9 Pro looking slightly sharper.

Indoors, away from the harsh summer sun, both cameras produce photos that look good with adequate brightness, details and sharpness. 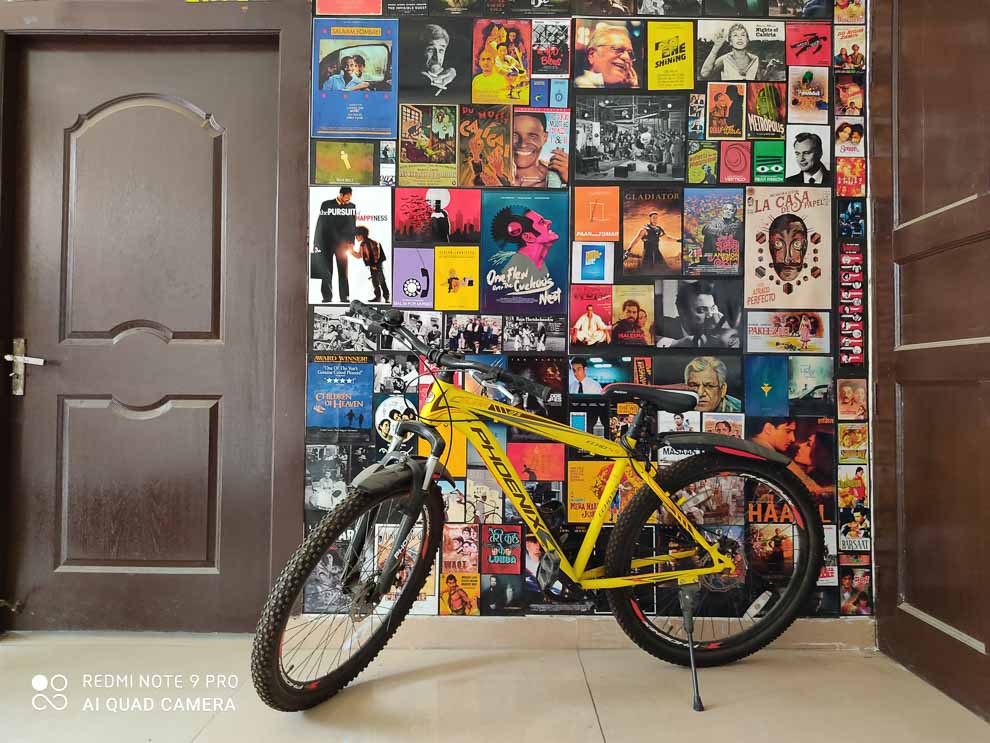 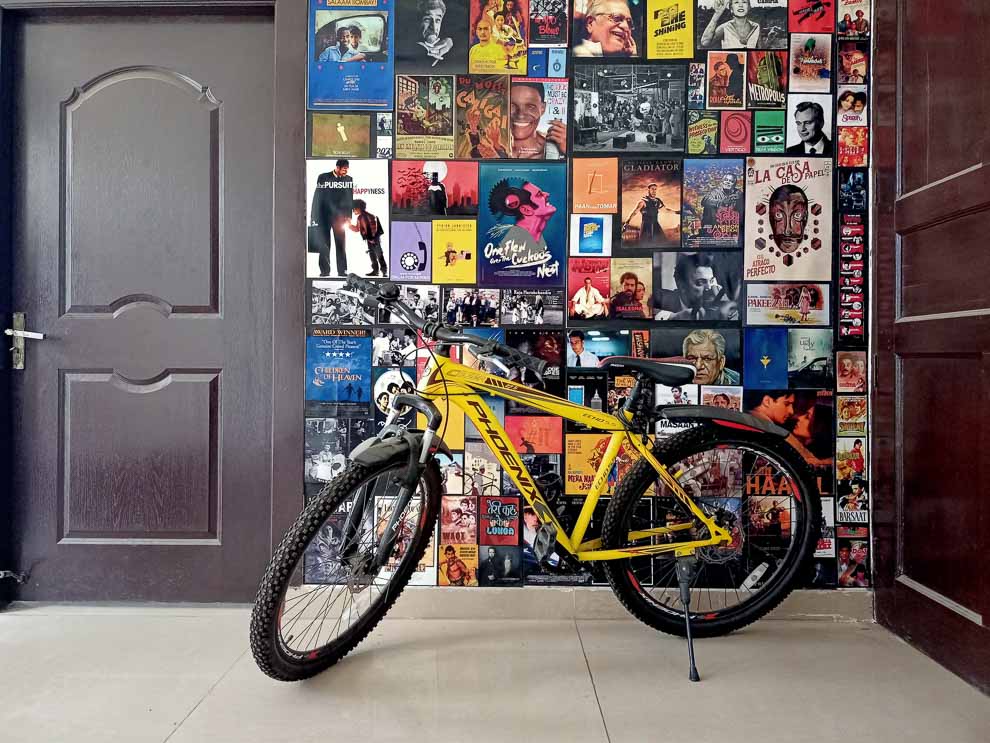 Looking at the indoor shots, it seems the Redmi Note 9 Pro tends to produce a warmer white balance, while the Narzo 10’s output looks slightly better. As for the details and the colours, both smartphones managed to make the scene look good. There really isn’t much of a difference here. 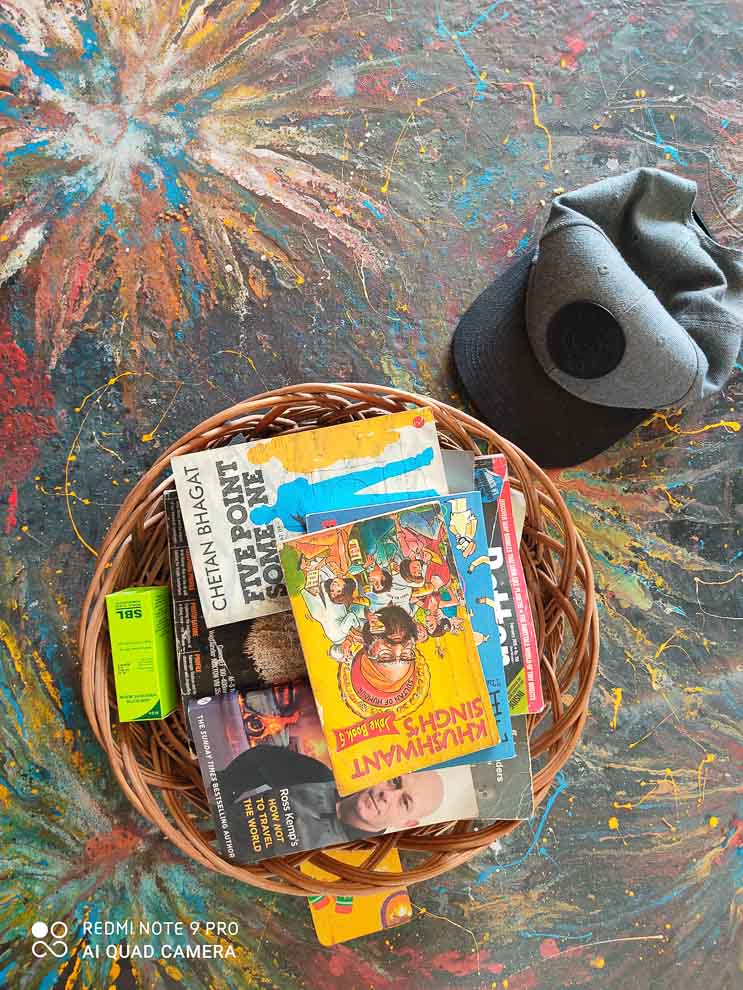 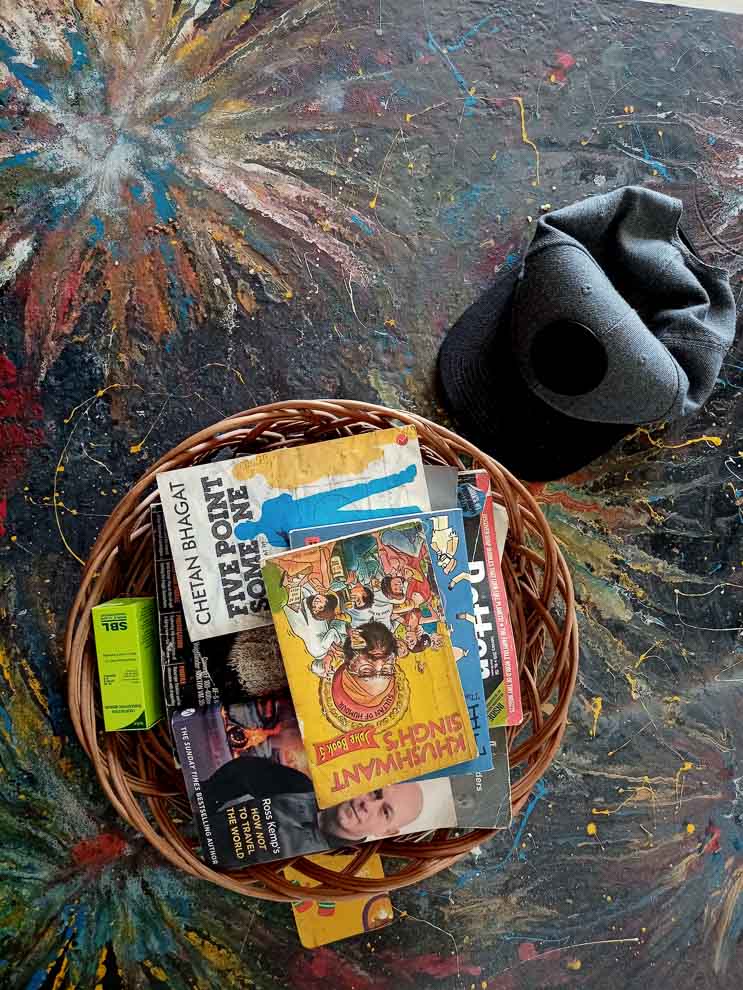 Another shot taken indoors turns the table. Here the photo by the Redmi Note 9 Pro looks better with the colours popping out and the sharpness very much on point. The Narzo 10’s shot also looks good, but it’s much darker than the Note 9 Pro’s with boosted contrast killing details in the shadows, especially on the cap in the frame. Having said that, the textures are far more prominent on the shot from the Narzo 10 as compared to the Redmi Note 9 Pro. 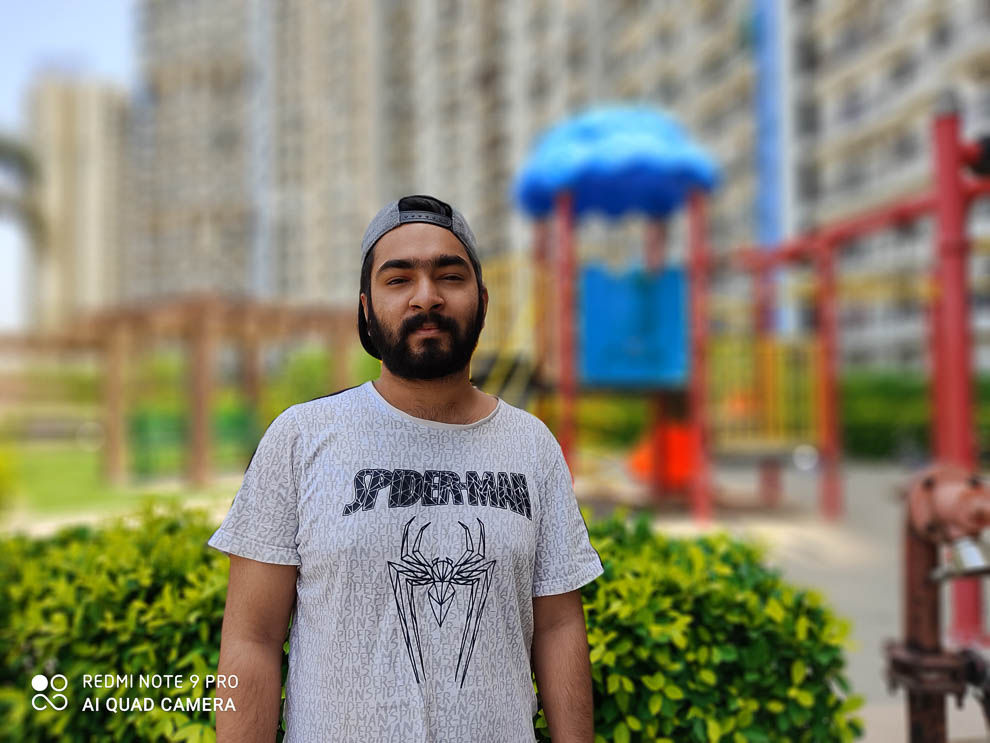 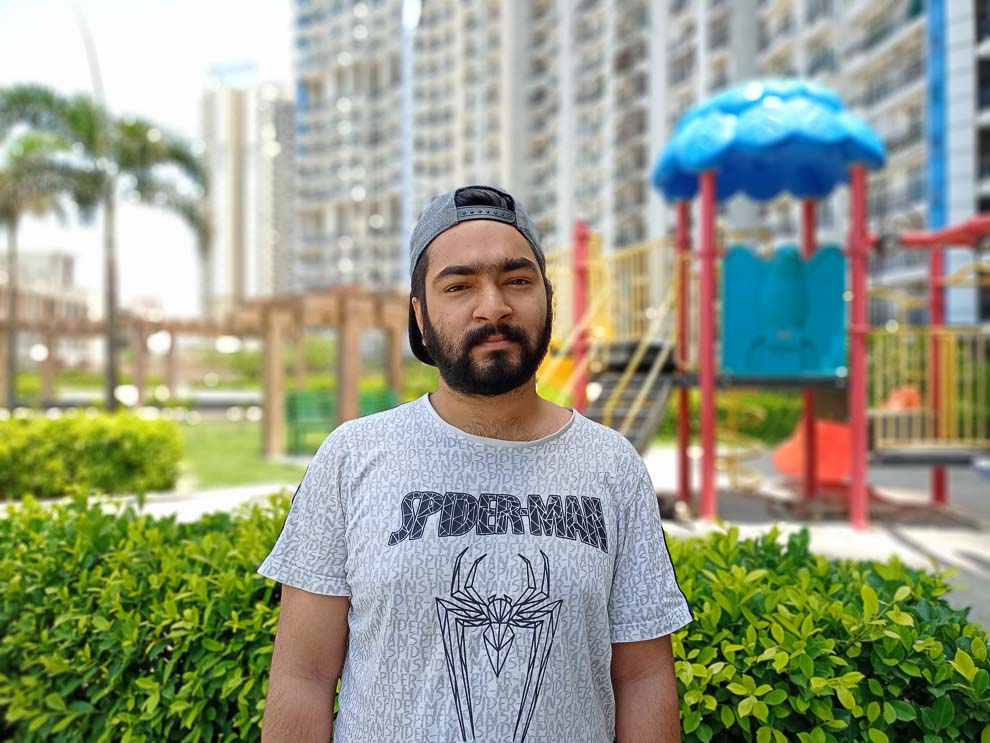 This was a closely played match. The portrait shot from both smartphones is nearly flawless, at least as far as the subject separation is concerned. Both managed to get the edges just right. However, the quality of the background blur is better on the Narzo 10 as compared to the Note 9 Pro. The latter looks like a good amount of gaussian blur has been applied to it. The bokeh in the Narzo 10 looks far more natural.