OnePlus has teased a new ‘Crack the code’ challenge called Crackables, which will go live on September 18. 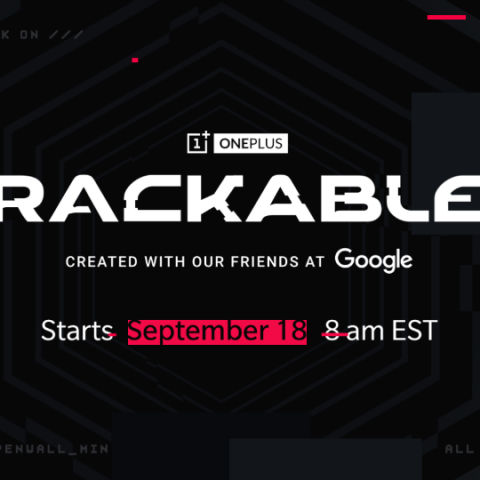 OnePlus made news recently by confirming the presence of an in-display fingerprint sensor on its upcoming smartphone which is most likely the OnePlus 6T. The company has now announced a new challenge via its social media channels called “Crackables”. The new challenge has been created by OnePlus in collaboration with “Friends at Google,” but there are no details as yet about the tasks one has to complete in order to win the challenge. All we know right now is that participants will need to “Crack the code.” The event will commence at 8 AM EST (5:30 PM IST) on September 18.

“Think you have what it takes to crack the code? Join Crackables, and unseal the prison. Welcome, Wanderer. Begins on September 18,” reads the YouTube video description of the challenge. One can head over to the website www.crackables.oneplus.com/ to know more. The company has teased an animated character, that in some way seems to be associated with the challenge and we hope to know more about it in the coming days.

"Greetings, Wanderer!" 7 Days until you can crack the code around the globe. Let the countdown begin! Join #Crackables, starting September 18.

This is not the first time OnePlus has hosted a competition or challenge. Back in June, the company announced the 'OnePlus Asphalt Cup' in India where participants played Asphalt 8: Airborne and competed for a combined cash prize worth Rs 9 lakhs, along with the OnePlus 6 smartphones and Bullets Wireless Bluetooth earphones. This challenge was limited to OnePlus users in India, but the new Crackables challenge seems to be a global event.

As we mentioned earlier, the company has confirmed the presence of an in-display fingerprint sensor on its upcoming device. The company could also be planning to launch new Bullets Wireless earphones with the OnePlus 6T as a OnePlus headphone with the model number BT32B recently showed up on FCC. The alleged OnePlus 6T was recently leaked in images on Weibo, hinting at a waterdrop notch display and a triple rear-camera setup.