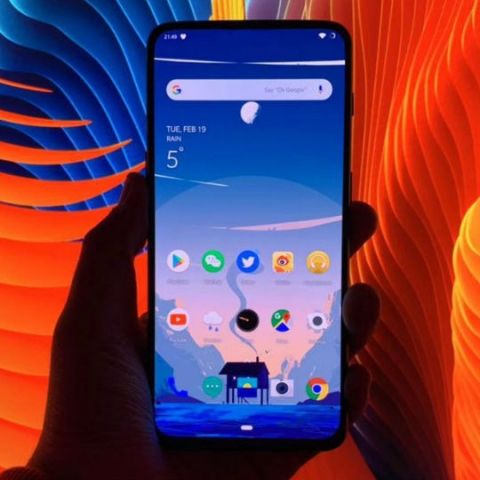 Unlike previous leaks, it looks like the OnePlus 7 will not have a punch hole camera. It is possible that the smartphone may come with a pop-up camera.

Information circulating the internet suggests that the upcoming OnePlus 7(₹ 29999 at amazon) will not sport a punch hole camera. In fact the device will will have a Full View display.  Chinese tipster, @Steven_Sbw has leaked OnePlus 7's front panel. The leaked image shows the display without a notch or a punch hole camera. It is possible that the smartphone sports a pop-up camera similar to what we have seen on the Vivo Nex and the Oppo Find X. Since all three smartphone makers - Oppo, Vivo and OnePlus are under the same mothership - BBK Electronics, it wouldn’t be a surprise if all three of them share the design choice. This leak comes from a Chinese leakster named Steven Sbw.

It should be noted that the same leakster revealed an image earlier that Digit debunked. Taking a closer look at the previous leak we noticed the device looked quite similar to the Oppo Find X. But that’s not all. The button placement of the device made the phone look like the display is upside down. The buttons are in the wrong corner. You can read more about the previous leaked image here.

Moving over to other speculation, it is expected that OnePlus will unveil their upcoming smartphone in April/May 2019. OnePlus has however confirmed that they will showcase a prototype of their 5G phone at MWC 2019. OnePlus’ announcement reads - “OnePlus, at Qualcomm’s booth (Hall 3 Stand 3E10), invites all to connect and communicate with our community over a 5G network. Attendees will also be able to experience the capabilities of 5G gaming on a OnePlus 5G prototype. Keep an eye out for the limited-edition Qualcomm x OnePlus pin badge, only available at the OnePlus stand.”

Ever since the era of the OnePlus 3, OnePlus has launched two phones year. It is possible that this this time we see multiple OnePlus phones at the launch event in April/May.