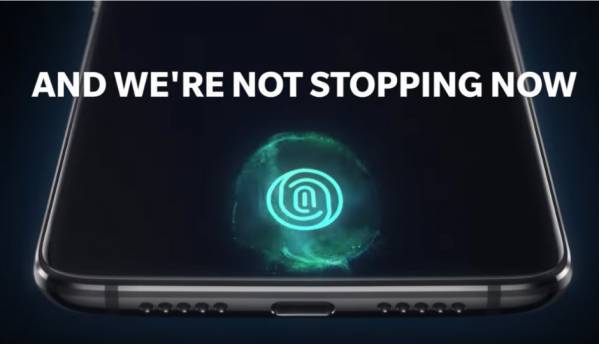 Additionally, the OnePlus 6T has yet again leaked in images that reveal a thin-bezel display with ‘waterdrop’ notch and dual-rear camera setup.

OnePlus has already confirmed that the upcoming OnePlus 6T will be ditching the 3.5mm audio jack and at the time, the company said that its removal makes space for newer technology to be integrated into the device. It was speculated that this new technology might be the in-display fingerprint sensor and now, OnePlus CEO, Pete Lau has confirmed the same. The company is calling the new unlocking mechanism Screen Unlock. Lau also said that it was a tough decision to remove the headphone jack but he says, "After you experience the Screen Unlock you'll fall in love with it, realize that it's the experience that you wanted."

"A tremendous amount of time and effort has gone into pioneering an in-display fingerprint sensor powerful enough to forever change the way you interact with your phone," Lau said in a blogpost detailing the new feature. "It all starts with a new optical fingerprint module, which houses a small lens that can accurately register your fingerprint as it presses down on the cover glass. The screen is used as a light source to enhance the outline of your fingerprint, enabling the sensor to accurately read its exact dimensions and shape. We use a dedicated ‘Trust Zone’ found in the Qualcomm® Snapdragon 845 to store your fingerprint information, which serves as an isolated virtual space for the sake of confidentiality. Whenever Screen Unlock is used, your fingerprint is compared to the information stored in the Trust Zone to ensure authenticity and actively defend against false patterns," he explained.

Additionally, WinFuture has posted a couple of alleged images of the OnePlus 6T, which can be seen with a glossy and matte black rear panel. The image reaffirms the rumours of the OnePlus 6T featuring a notch shaped like a waterdrop and the overall bezels also seem to be thinner when compared with its predecessor. The volume rockers can be seen on the device’s left edge, while the right edge houses the power button, along with the alert slider. We already know that the device won’t be shipped with the 3.5mm headphone jack and it is also missing in the images.

The rear panel of the OnePlus 6T can be seen featuring a dual-rear camera setup. Early rumours of the smartphone suggested that since the Oppo R17 Pro ships with triple rear-cameras, the OnePlus 6T could feature the same. However, new reports of the handset are consistently tipping that the company will stick to two sensors on the back of the device and the notch on the front can be seen housing a single camera. The rear panel is similar to the one we have seen on the OnePlus 6 but there’s no fingerprint sensor. This doesn’t come as a surprise as OnePlus has already confirmed the presence of an in-display fingerprint sensor on the phone. The company recently teased the upcoming phone in a small 5 second video, which tipped at an edge-to-edge display with slim bezels on the device. A previously leaked image of the smartphone’s launch suggests that the OnePlus 6T might be announced on October 17. The phone is rumoured to feature a ‘waterdrop’ notch display, same as the Oppo R17 Pro or the Vivo V11 Pro. In terms of display size, it is rumoured to sport a 6.4-inch AMOLED screen with a 2340x1080p resolution. The device is expected to be powered by on the Qualcomm Snapdragon 845 SoC, which is coupled with the Adreno 630 GPU. The OnePlus 6T was also listed on an online retailers’ website ahead of the launch. The listing suggests that it could be launched in 6GB and 8GB RAM versions and with 64GB/128GB/256GB of internal storage.

You can read our complete rumour roundup of the OnePlus 6T here.