OnePlus has announced that its OnePlus 6 X Marvel Avengers Limited Edition smartphone will go on sale tomorrow at 12PM via Amazon and OnePlus.in. The limited edition OnePlus was announced alongside the standard OnePlus 6 in India and it comes with 8GB RAM, coupled with 256GB of internal storage. The glass rear panel of the smartphone features a ‘Karbon’ fiber case pattern and the alert slider and the Avengers logo on the back are also gold in colour. One will also get an Iron Man protective case bundled in the box, along with an Avenger medal. OnePlus announced an Infinity Medal challenge while unveiling the smartphone and said that there are a total of six medals. However, it’s not yet clear what one would get by collecting them all.

The OnePlus 6 X Marvel Avengers Limited Edition is priced at Rs 44,999. For launch offers, Citibank debit and credit card customers will get to avail Rs 2,000 off while purchasing the device, during the first week of sales. They will also get to opt-in for a no-cost EMI for up to 3 months on all popular banks and all buyers will be eligible for 12-month accidental damage insurance by Servify on downloading the Kotak 811 app. Streaming on Prime Video app, users will receive Rs 250 Amazon Pay Balance as well, along with discounts of up to Rs 500 on Amazon Kindle ebooks. Buyers will also get benefits of up to Rs 25,000 on flight and hotel bookings from ClearTrip and Idea subscribers will also receive a Rs 2,000 cashback with the smartphone. 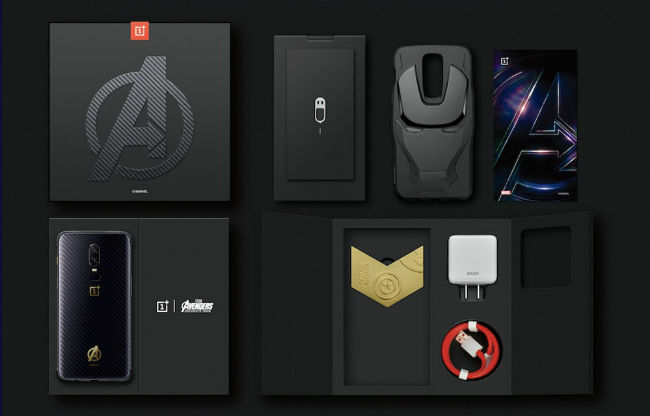 Except for the changes in design and the bumped up internal memory, there is not much of a difference between the OnePlus 6 and the Marvel Avengers Limited Edition of the phone. It is powered by the latest Snapdragon 845 SoC and features a 6.28-inch Full Optic screen with a taller 19:9 display aspect ratio. It features an all-glass rear panel, but there’s no wireless charging support. It packs a 3300mAh battery, which supports the company's proprietary Dash Charge technology and one will also be able to experience Android P on the device.

In terms of optics, the OnePlus 6 features vertically stacked dual-rear cameras where one is a 20MP Sony IMX519 sensor and another is a 16MP Sony IMX376K sensor. The rear camera comes with both Electronic image stabilization (EIS) and Optical Image Stabilisation (OIS). The camera can also capture slow motion videos at HD resolution and at 480 fps for 60 seconds. On the front is a 16MP sensor with a f/2.0 aperture lens. The smartphone runs on OxygenOS 5.1, which is based on Android 8.1 Oreo and comes with a rear-mounted fingerprint reader and supports Face Unlock as well.

Just days after the OnePlus 6 (review) went up for sales, the company rolled out a software update for the device, which removed the Always On Display (AOD) feature. The feature allows one to quickly glance at the time and date, and if there are any app notifications. It seems that the feature was causing accelerated battery drain, due to which OnePlus disabled it on the OnePlus 6. You can read more about it here.