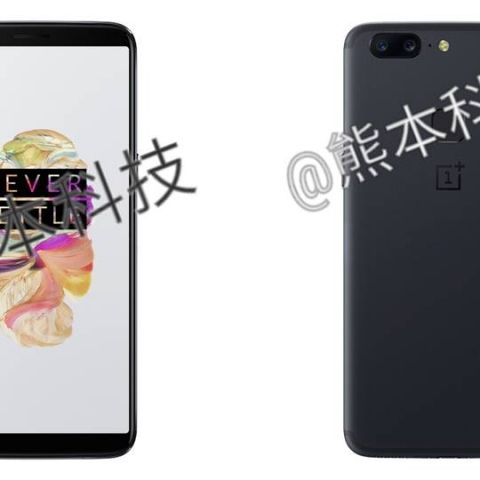 OnePlus is preparing to launch the OnePlus 5T, an updated version of its flagship smartphone later this year. The smartphone has leaked in the form of renders recently and was rumoured to launch on November 5. While there is no clarity on the launch date just yet, the renders of the smartphone have leaked once again.

While the OnePlus 3T was an upgrade over the OnePlus 3 in terms of specifications, the upcoming OnePlus 5T will be a major upgrade on the design front. The smartphone is expected to sport a new design with thinner bezels than its predecessor. The new renders posted on Weibo, China's microblogging platform further suggests that the front of the OnePlus 5T might resemble that of the Samsung's Galaxy S8.

With the new bezel-less design, the front-mounted fingerprint sensor will be relocated to the back and might look similar to the upcoming Oppo F5. The handset is expected to sport a 6-inch display with a resolution of 2160 x 1080 pixels and an aspect ratio of 18:9. The new taller display will be a stark difference from the typical 5.5-inch display with 16:9 aspect ratio on the OnePlus 5.

The smartphone will retain the power button, volume rocker and the alert slider in the same place as that of the OnePlus 5. The smartphone is expected to be powered by Snapdragon 835 chipset since Qualcomm is not planning to launch an updated variant this year. The OnePlus 5T is also expected to arrive in the option of 6GB RAM, 64GB storage and 8GB RAM, 128GB storage variants. It will feature a dual camera setup and OnePlus might further improve the optics to improve the overall imaging experience.

The speculations around the OnePlus 5T gained momentum after the OnePlus 5 went out of stock across major markets. The handset is expected to be a major improvement over its predecessor primarily in terms of specifications and design and might not differ much in terms of performance. There is no clarity on a launch date, availability or pricing of the smartphone yet but considering the November 15 launch date of the OnePlus 3T, the launch of the OnePlus 5T seems imminent.