UPDATE: After our hopeful rumours circulating on the Internet, OnePlus has recently confirmed to Android Authority that it will not be launching the OnePlus 3 on April 7. According to the OnePlus spokesperson, "The April 7 event is focused on the China market. We will not be launching our next device then." However, OnePlus CEO Carl Pei had previously affirmed that the OnePlus 3 will be launched in Q2 2016, so we expect it to launch some time within June this year. As of now, all that we know from OnePlus is that the OnePlus 3 will be "an awesome device". We certainly hope so.

The OnePlus 3 may be unveiled at an event in Beijing on April 7, cites a report by GizmoChina. While we have seen a limited number of rumours till now, a latest screenshot from AnTuTu reveals data in accordance to the latest flagships of this year. The OnePlus 3, model number A3000, is expected to run on Qualcomm Snapdragon 820, along with 4GB of RAM and 32GB of internal storage. Other rumours tip it to house a 1080x1920-pixel Full HD display, Oxygen OS based on Android Marshmallow 6.0.1, a 16MP rear camera and an 8MP front camera.

No Sandstone back, no invitation system, and base storage of 32GB may spell success for the OnePlus 3

Going by the rumours, it looks quite like what most would expect the OnePlus 3 to be. Until now, OnePlus has been providing options for 16GB and 64GB storage variants. With the leaked benchmark suggesting 32GB of internal storage, it is possible that OnePlus will upgrade its base storage to 32GB for this, and future devices. This would be a good strategy on behalf of the company, that has seen widespread appreciation and acceptance of its devices, since launching OnePlus One in April 2014. The device was previously tipped to be launched in Q2 2016, and OnePlus is expected to drop the Sandstone back for a metal panel on the rear. The infamous invitation system may also be dropped. 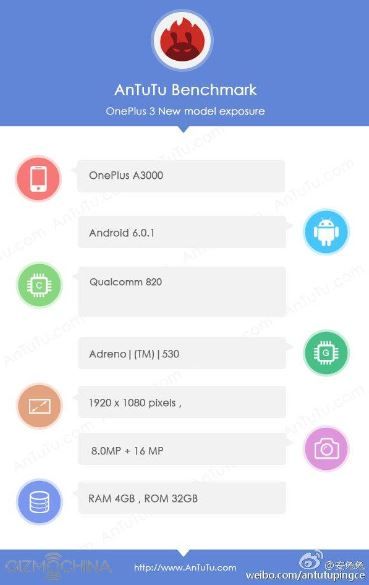 As of now, the device has not been teased or spoken about widely, so the April 7 Beijing event may just be a false alarm. However, we cannot rule out the possibility of OnePlus limiting teasers and other promotionals to go for a bigger impact upon launch. We have our eyes peeled across the Internet, and will let you know as soon as further information comes along.