Moto X Play's India launch is just around the corner, according to the latest teaser, features 21MP camera and 5.5-in FHD display at an expected price of around Rs. 20,000 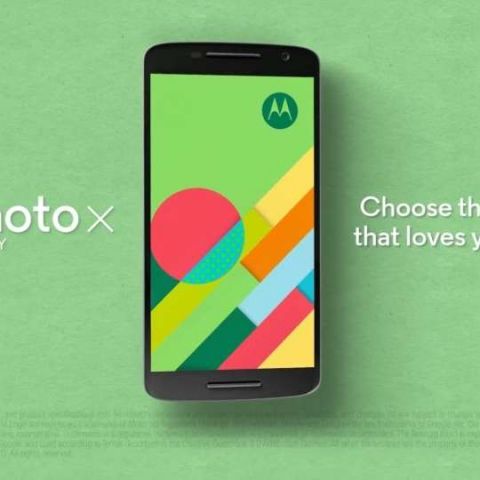 Motorola India has posted a couple of teasers about the imminent launch of Moto X (3rd Generation) in India. The company has not said anything about which variant, Play or Style, of the smartphone will be launched, but the image and specs shown in teasers hint at the Moto X Play. The first teaser says, “Tired of those hazy memories? Get hitched with a perfect partner with a 21MP camera.” while the second one says, “No more getting dumped by your phone. Your perfect partner is coming with 30 hours of battery backup.” Both the teasers are followed by a hashtag of #XOMoto.

Tired of those hazy memories? Get hitched with a perfect partner with a 21MP rear camera. #XOMotoX pic.twitter.com/EacxxybKL2

Reports of Motorola launching two devices in India first emerged last month. The Moto X Play comes with a 5.5-inch FHD display, octa-core Qualcomm Snapdragon 615 processor clocked at 1.7GHz, 2GB RAM, 21MP rear and 5MP front cameras, 3630mAh battery and Android LollIpop v5.1.1. There is an option to choose between 16GB and 32GB of internal storage, both with microSD card support. The smartphone is priced at $299 in the US, so it is expected to be priced at around Rs. 19,964 in India. On the other hand, the Moto X Style has a 5.7-inch QHD display, 1.8GHz Snapdragon 808 SoC, 3GB RAM and 3000mAh battery. It has 16/32/64GB storage variants, and also runs on Android Lollipop v5.1.1. The device is expected to be priced in the 30k price segment in India. At the moment, it is not confirmed whether both the devices will be launched simultaneously, or at different time points.

Like the currently available Motorola smartphones, the Moto X (3rd Gen.) is also expected to be a Flipkart-exclusive smartphone for now. There have been recent reports about the company considering offline stores for selling phones. It will be interesting to see whether the company will go for a change in its long-standing sales strategy, which it has been following for quite a long time.