The smartphone has been shown off in a CAD-based render video, which reveals its notched screen and a five-camera setup. 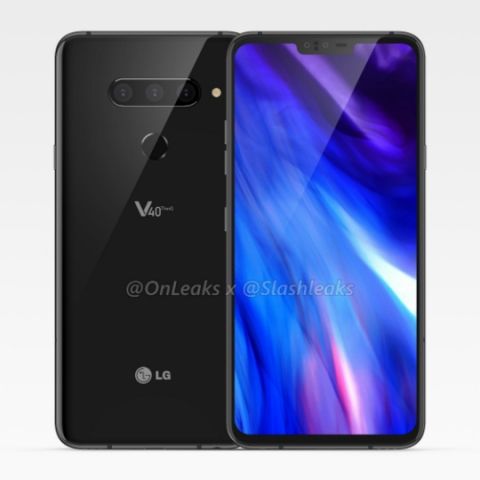 LG seems to be working on its next flagship smartphone, the V40 ThinQ, which is rumoured to launch around November. The upcoming device was recently leaked in the form of press renders and now, SlashLeaks and OnLeaks have collaborated to bring its 360-degree video that is said to be based on the smartphone’s CAD files. The new video gives a closer look at how the smartphone could be designed and it also reveals a screen with a notch. The handset can be seen featuring a triple rear camera setup, similar to the one found on the Huawei P20 Pro, and some specifications of the handset have also been shared.

The video reaffirms an earlier report that the V40 ThinQ could feature a total of five cameras. Three sensors can be seen on the rear and a dual camera setup is said to be housed inside the notch. Of the three cameras on the rear, one is said to be a primary sensor (most likely an RBG sensor), while another one could be an ultra wide-angle lens. The third sensor might come with a telephoto lens. The device could feature a  6.3-inch screen with QHD+ resolution of 3120 x 1440 pixels. The side-bezels are thin but a noticeable chin can be seen on the bottom of the display. On the rear is a fingerprint sensor, slightly below the three cameras.

It seems like LG has decided to keep the 3.5 mm audio jack intact on the V40 ThinQ. It is placed on the bottom, along with a USB Type-C port and speaker grills. Both the front and rear of the smartphone could be protected by the latest Gorilla Glass 6, but this is a speculation right now. The SIM slot and power button can be seen on the right edge of the device, while the volume rocker is on the left edge along with another button which is expected to be a dedicated Google Assistant button.

The company had previously launched the LG V35 ThinQ under its V series of devices. The smartphone is said to deliver faster performance and comes with 'enhanced' photography, audio and AI-based functionalities. The device is IP68 dust and water resistant and comes with MIL-STD 810G certification. It offers 6GB RAM, coupled with 64GB internal storage. There is also a V35+ ThinQ with 128GB of storage onboard. Except for more internal storage, there is no difference between the V35 ThinQ and the V35+ ThinQ. The devices have been launched in New Aurora Black and New Platinum Gray colour variants, and cost $900 (Rs 60,720 approx) in the US. You can read more about the phones here.