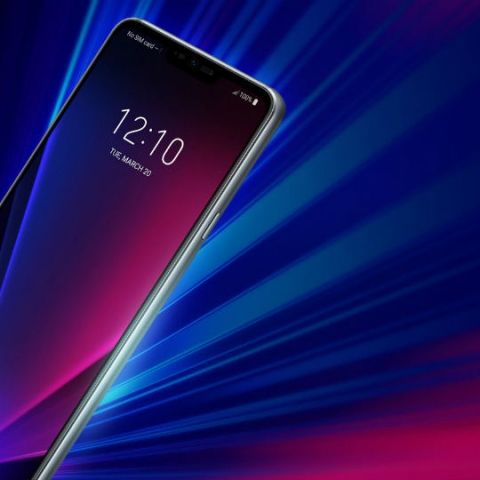 LG will launch its upcoming flagship smartphone, the G7 ThinQ on May 2 and ahead of the official unveiling, Evan Blass had leaked an official poster of the device. The new image is in line with a previously leaked render of the device and it shows that it will feature an iPhone X-like notch on top of its display and come with a thin-bezel design. Rumours suggest that the smartphone will make heavy use of artificial intelligence (AI), which is the highlight of company’s ThinQ branded phones, like AI Cam, which is said to apply four different levels of optimisation for enhancing the quality of a captured image.

The previously leaked render of the smartphone also suggests that the smartphone could launch in five colours, Platinum Grey, Raspberry Rose, Aurora Black, Moroccan Blue, and a matte version of Moroccan Blue, which will reportedly be available for select regions and network carriers. The renders also tip at vertically stacked dual-rear camera setup and a rear-mounted fingerprint sensor, embedded into the home button. In terms of specifications, The LG G7 ThinQ could be powered by the Qualcomm’s Snapdragon 845 with 4GB RAM and 64GB of internal storage. It was spotted on AnTuTu recently, where it scored 2,52,473 on the benchmarking test.

Alongside the LG G7 ThinQ, the company might also be working on the LG V35 ThinQ, which is expected to be the successor to the company’s recently launched V30S+ ThinQ smartphone. According to an earlier report, the smartphone could sport a 6-inch QHD+ OLED display with a taller 18:9 display aspect ratio and an 80-percent screen-to-body ratio, without a notch on its display. The smartphone is said to sport an edge-to-edge design crafted to “fit in the palm of your hand,” and the company aims to package it in a slimmer form factor and making it lighter. It could come in Black and Grey colour options at the time of launch, with a “premium glossy finish.”

In terms of optics, the smartphone will reportedly feature upgraded dual 16MP rear cameras. One is said to be a ‘standard’ camera with a glass lens, f/1.6 aperture and 10-bit HDR compatibility, whereas the other one is tipped to be a wide-angle lens with a 107-degree field-of-view. The main cameras will also come with features like quickly switching between the two lenses, “AI Cam,” and Google Lens support at launch. There will also be a Super Bright Mode and “superpixels” for capturing better images in extreme low-light conditions.

As the phone will be launched under the ThinQ branding, it is expected to come with artificial intelligence (AI). Its primary use will reportedly be for image processing and other tasks like improvements on the voice assistant’s response. In terms of audio, the device is said to come with a same 32-bit Hi-Fi Quad DAC setup as its predecessor, but with extra enhancements and digital filters. It may also include far-field mics to capture a user’s voice better from a distance.