While Oppo (Find X) and Vivo (Vivo Nex) have already showcased their idea of how to achieve a complete bezel less phone, Xiaomi is reportedly preparing to unveil its own device that defies the notch trend. According to a few leaks on the internet, Xiaomi with its Mi Mix 3 could join its fellow Chinese smartphone makers in launching a true bezel less smartphone. According to renders on ithome.com website, Xiaomi may introduce a pop-up selfie camera in the Mi Mix 3 that -- just like Vivo NEX -- will come up from the the top edge of the phone whenever required. Xiaomi’s pop-up selfie camera also has a LED-flash.

According to the latest renders, the display of the phone has ultra-thin bezels. Its predecessor the Mi Mix 2 had a selfie camera installed in the thick bottom bezel. Not only that, the renders revealed that there is no fingerprint sensor on the device anywhere. Now it may point two things -- Either Mi Mix 3 will not have a fingerprint scanner at all or it may come with an in-display fingerprint sensor. It is still unknown and a clear picture will be seen after the device is actually launched in China.

When it comes to specifications, nothing was mentioned clearly in the reveal but if the media reports on the internet are to be believed, the Mi Mix 3 will have flagship specs. The smartphone will reportedly be powered by a Qualcomm Snapdragon 845 SoC with up to 8GB RAM and 256GB of onboard storage. In the camera department, the Mi MIX 3 is likely sport a 12MP + 12MP dual-camera system and may have a 20MP front shooter. 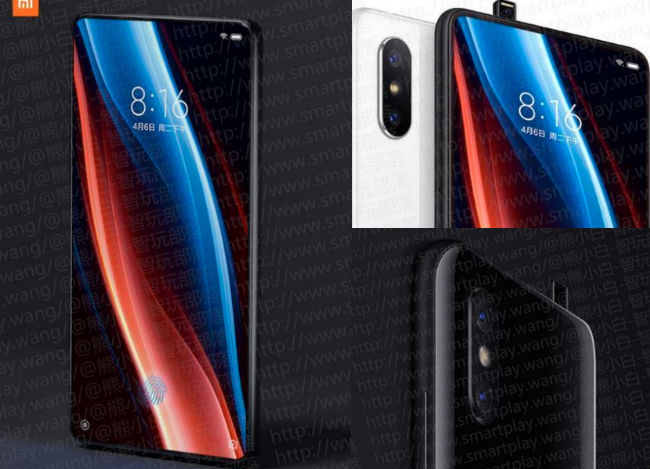 When it comes to the software, another leak has claimed that Mi Mix 3 will run MIUI 10 on unidentified Android platform. ‘The Leaker’ noted that the above mentioned leak was made online by a telegram group named XiaomiUI. As far as, the display is concerned, the leak also mentions that Mi Max 3 will reportedly have 6.99-inch display.

Last year, ‘Concept Leak’ posted a photo of a back cover of a device that it claimed was Mi Mix 3. The back panel showed vertically aligned dual cameras and fingerprint sensor. The Mi Mix 3 will be a leap from Mi Mix 2 if it launches with full bezel less display. You can read our review of mi Mix 2 here.