A Reddit user shared the images of a phone said to be the Google Pixel 3. The photos suggest that the device may feature a 5.5-inch display with a resolution of 2160x1080.

As the launch of the Google Pixel 3 XL gets closerm, there has been a surge in the number of leaks regarding the smartphone. The devcie was recently, seen in a YouTube hands-on video by a Ukrainian user named Распаковываем. Amid these extensive reports and videos, the smaller Google Pixel 3 has managed to remain pretty well hidden, but not anymore. An anonymous redditor has shared the photos of what it claims to be the Google Pixel 3, which show the phone’s overall design and reveals some information about the display, its resolution and the battery pack that the smaller Pixel is expected to launch with.

The images show a black-coloured smartphone that looks like the Google Pixel 2 XL. It has a two-tone back panel of which almost one-third is covered in glass, while the remaining section seems to be matte. There is only one rear-camera with an LED flash and the fingerprint sensor is centrally located on the back. From the side, the images show the phone carrying a power button and a volume rocker on the right edge. On the front, there is no notch and the bezels on the side seem thinner than the Pixel 2 XL. The dual-camera setup is not seen clearly but some screenshots suggest two front shooters.

The major difference in design can be noticed in the length of the front-facing dual speakers. Also, there is a small opening between the rear-camera and the LED flash. Nothing has been talked about the pin-hole and it is assumed to be a microphone to capture the audio while a user is shooting a video.

The Redditor also posted the screenshots, which reveal some specifications of the the device in question. According to the shared screenshots, the Google Pixel 3 is expected to sport a 5.5-inch display which will have a resolution of 2160x1080, 18:9 aspect ratio and 60GHz refresh rate. The battery capacity is suggested to be 2915mAh. When it comes to the camera, the two front-facing shooters are seen to feature 8MP sensors each. While the ‘Front Camera #1’ has f/1.8 and f/2.2 suggesting a variable aperture, the ‘Front Camera #2’ has a static f/1.8 aperture.

It has been reported earlier that Google might have incorporated two camera on the front to them to apparently shoot ‘Super Selfies’ and improving a security/facial recognition feature, but there’s still no hard evidence of that. Google is also tipped to include a new Visual Core chip in the smartphones, which will be used for “more than just HDR+.” You can read more about the Pixel 3 XL smartphone here. 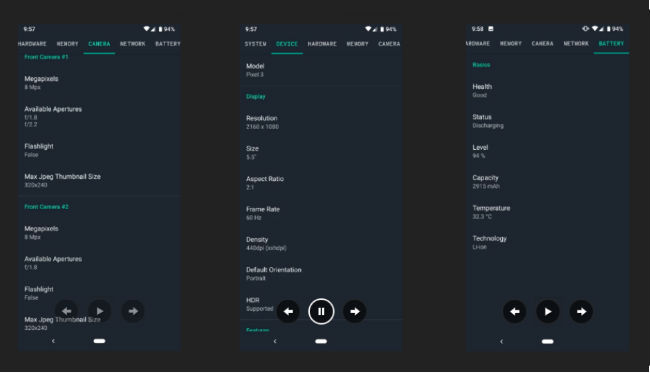 Meanwhile, Google is also reportedly developing a ‘mid-tier’ Pixel smartphone keeping in mind the Indian market. Just like Apple, it seems Google also wants to target the Rs 40,000-Rs 50,000 segment where OnePlus is registering massive growth numbers. According to a report in The Economic Times, this India-centric phone could be made available in the country early next year. Previous reports have suggested that Google may incorporate a Qualcomm Snapdragon 710 SoC. Reportedly, Google Pixel Hardware team visited the country to understand the needs of an average Indian user. Google has only one percent market share in the premium segment and sold only 80,000 Pixel 2 phones since its launch in India last year.