Apple's upcoming event is just a few hours away and users can expect three iPhones, a low-cost MacBook, an iPad Pro and Apple Watch Series 4, if you go by the rumours at least. Now, noted famous analyst, Ming-Chi Kuo has published his latest set of predictions. He claims that Apple will ditch the Lightning port in favour of the USB Type-C port for the first time and is expected to ship with the new 18W USB-C charger. Kuo also said that the newest Apple Watch in the series will support electrocardiography, or ECG and “use ceramic backs on all models.”

The analyst also reiterates his previous claim that the 'cheaper' 6.1-inch LCD iPhone will launch in “late September-early October due to quality issues of assembly and display.” The iPhones are expected to retain 5W charging and Lightning ports like their predecessors. On the rumoured low-cost MacBook, Kuo says that it may replace 12-inch MacBook in the lineup and may even feature Touch ID, but no Touch Bar. The graphic shared by the analyst notes the launch of AirPods 2 and the AirPower charging mat, though he does not say clearly about the “Hey Siri” feature and the rumored new charging case that works with AirPower. 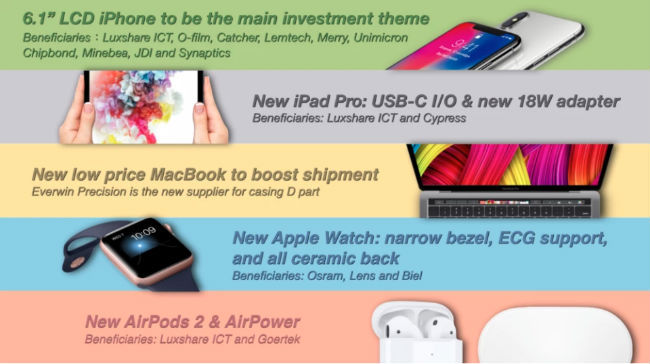 Tech website 9to5mac expects that Apple will only unveil the three new iPhones and Apple Watch Series 4 on stage, while there could be a soft launch for the MacBook and iPad Pro. Citing Kuo’s prediction about the Apple Watch, the platform also says that all the watch models may be switching to ceramic backs this year and that the Series 4 is only offered with LTE.

In a separate report, Bloomberg says that the rumoured iPhone with the 6.1-inch LCD display could be called the ‘iPhone Xr’. Until now, media reports have claimed that the most affordable iPhone of the 2018 lineup will be known as ‘iPhone XC’. “Apple has considered calling the phone the ‘iPhone Xr", Bloomberg's source was quoted as saying.

You can follow our pre-event coverage on what all to expect from the Apple event on September 12 by clicking here.