Huawei P30 Pro is expected to be unveiled next year and keeping the company’s timeline in mind, it could be unveiled around April 2019. We came across a couple of leaks regarding the device which hint at a curved OLED display and the possibility of a newer sensor integration for the phone’s camera. Now, popular case maker Olixar has listed cases for the P30 Pro that hint at the presence of four rear cameras on the device. This is not the first time the case maker has listed cases for an upcoming device as it did the same for the Samsung Galaxy Note 8, OnePlus 6T and some other handsets.

Going by the cutouts on the cases, it seems like Huawei will move to a vertically stacked quad camera setup for its upcoming P30 Pro smartphone. There might also be dual LEDs but there’s no cutout for a fingerprint sensor on the rear, suggesting that the phone might come with an in-display fingerprint sensor. Additionally, the front of the phone is also revealed with a water drop notch display but since case makers don’t always get the display right, we suggest you take it with a pinch of salt. While Huawei was the first phone manufacturer to introduce a triple camera setup with its P20 Pro, Samsung was the first company to introduce the Galaxy A9 (2018), which featured four rear cameras. 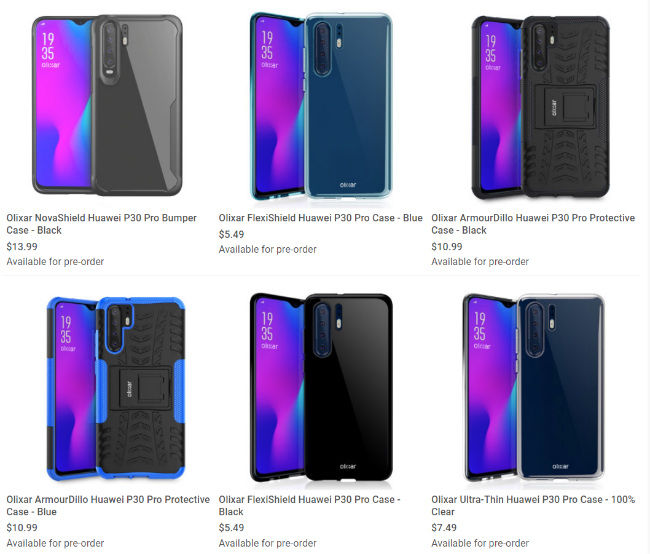 As for the upcoming Huawei P30 Pro, an earlier report suggests that the phone might come equipped with a curved OLED display. Its display is said to be be manufactured by China's BOE or South Korea's LG Display. Rumours suggest that the display of the P30 Pro could come with a punch hole camera. The P30 Pro is also expected to feature the 38MP Sony IMX607 sensor, which was leaked recently. The sensor is speculated to come with features like Advanced Noise Reduction, Quad Pixel Phase Detection Auto Focus, High signal to noise ratio (SNR), Ambient Light Sensor, “exceptional” low-illumination performance and more. You can read more about the Sony sensor here.