The Huawei Mate 9 was spotted on Geekbench running Android Oreo and the latest OS could soon be rolled out for users of the smartphone. TheAndroidSoul first spotted the device running the latest Android software and it is believed that the Oreo update for the Mate 9 may well be in final phase of testing for a subsequent release. 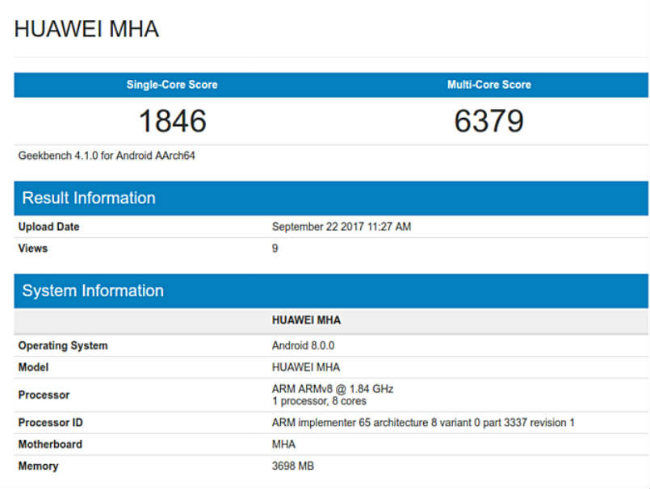 The Huawei Mate 9 currently runs on its Emotion UI 5.0 atop Android 7.0 Nougat. Huawei had recently announced the Android Oreo update for the Honor 8 Pro and Honor 6X. Android Oreo brings in a plethora of new features to devices, such as Picture-in-Picture mode, notification dots, support for Android instant apps, longer battery life, notification channel, and much more.

Huawei’s upcoming flagship, the Mate 10, is expected to be launched at an event on October 16. A recent report suggested that the company may launch four variants of the Mate 10 smartphone. Huawei Mate 10 Lite, one of the expected variants, is rumoured to sport a quad camera setup, sporting dual cameras at both the front and rear of the device.

Another recent leak suggested that the Mate 10 and Mate 10 pro will feature an 18:9 univisium display. The Pro variant is also expected to lose the home button on the front to accommodate a larger near bezel-less display. It is rumoured to sport 90 percent screen-to-body ratio and could be powered by a 4,200 mAh battery.

Both the smartphones have been confirmed to ship with Huawei’s latest Kirin 970 SoC. Huawei boasts of the processor’s AI capabilities, which can process data offline and faster than its predecessors. Due to the processor, the Mate 10 is said to achieve faster data transfer capabilities of up to 1.2Gbps and will offer concurrent dual-SIM 4G support.