Huawei Mate 10 may launch on October 16, company sends out invites 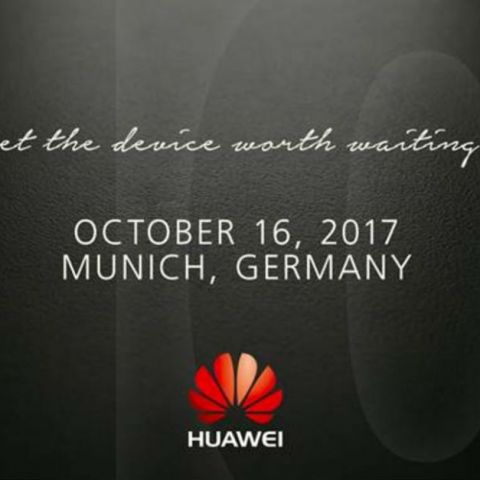 The media invite sent by Huawei teases a ‘10’ etched in the background and conveys a message, “Meet the device worth waiting for.” This is most likely an invitation for the launch of Huawei’s next flagship smartphone, the Mate 10. According to last month’s confirmations by Richard Yu, Huawei's Consumer Division Chief, the Mate 10 will launch with technology to compete with the next iPhone. The launch event for the smartphone is scheduled for October 16 in Munich, Germany.

Various rumours have been doing the rounds regarding the upcoming Huawei Mate 10 smartphone. Recent leaks suggested that the Mate 10 may sport a bezel-less design, much like the current Galaxy S8 and LG G6, in order to compete with the upcoming Samsung Galaxy Note 8 and Apple iPhone 8 premium flagship smartphones.

Along with the rumoured bezel-less design the Mate 10 is also expected to sport a 6.1-inch display with a Quad HD+ resolution. It may be powered by the Huawei’s new Kirin 970 chipset based on a new 10nm architecture.

The Huawei Mate 10, like its predecessor, the Mate 9, might sport a dual rear camera setup with Leica branding. It is also rumoured to offer 6GB RAM with 64GB internal storage. There are also reports of the Mate 10 being powered by a 4,000mAh battery and running on Android 7.0 Nougat.

Samsung and LG, both have already launched smartphones with edge-to-edge displays. Samsung’s upcoming Galaxy Note 8 launching on August 23, is expected to flaunt an Infinity Display design and LG has packed it’s Full Vision design in the lower price segment with the LG Q6. The Huawei Mate 10 was already expected to launch in October and this event could be where it’s revealed. Any news on the Mate 10’s pricing is yet to be known.