CES hasn’t even started officially and already we have HP unveiling new AMD-powered Pavilion Sleekbooks. For those not in the know, Sleekbooks in HP’s world, are nothing but AMD powered adaptations of Intel’s Ultrabooks, and therefore supposed to be cheaper.

HP has launched two new devices under the Sleekbook moniker; one is the Pavilion TouchSmart Sleekbook while the other is a simple Pavilion Sleekbook. Both notebooks sport a 15.6-inch screen with a resolution of 1366×768 pixels but of course as you would’ve guessed the TouchSmart version has a capacitive touchscreen.

As for the innards, the TouchSmart variant is the beefier one with an AMD Trinity A8 APU humming at its core, and supported by 6GB of RAM and (up to) 750GB of hard drive space. All of this is tightly packed within a 23 mm thickness, which is not ultra-impressive, but not bad per se. This one is to be priced at $699 (which translates to approx. Rs. 38,000).

The non-touchscreen Pavillion is powered by the AMD A6 APU, with 4 gigs of RAM and (up to) 500GB of HDD space. Being slightly under-specced it starts at a price of $499 (approx.. Rs. 27,000) and falls squarely within the “affordable” range. Though on the upside, it is 2 mm slimmer than its beefier cousin.

Reports suggest these Windows 8-based devices will be available February onwards. 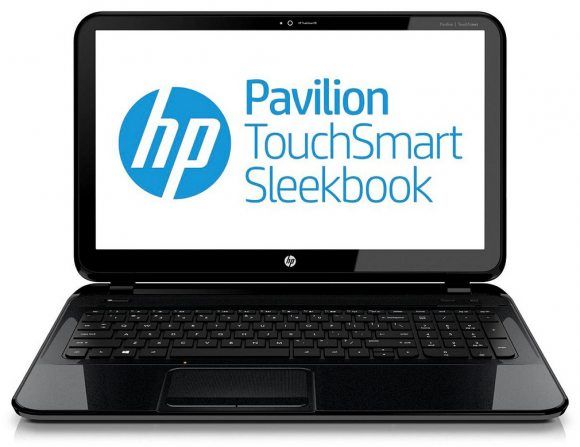