Apple has reportedly filed a patent for a new type of battery technology for their mobile devices – hydrogen fuel cells. Certainly eyebrow raising, the patents show one direction the fruity giant is pursuing in order to give its future mobile devices a few weeks worth of battery life without a recharge.

The schematics of the new fuel cell system can be seen in the patent application images below, released by the US Patent & Trademark Office on December 22. The company hopes to power both iOS and OSX portable devices with the new tech. This is apparently not the first patent in fuel cell technology filed by Apple in the recent past, with one in October covering fuel cell plates.

The latest patent applications show the use of an Apple MagSafe connector for fuel cell recharging. The fuel cell system design, as seen in the images, seems to be based with the intent to provide power to and receiving power from a rechargeable battery. It contains a fuel cell stack to converts fuel into electrical power, as well as a regulating controller, a power link, and a communication link t. 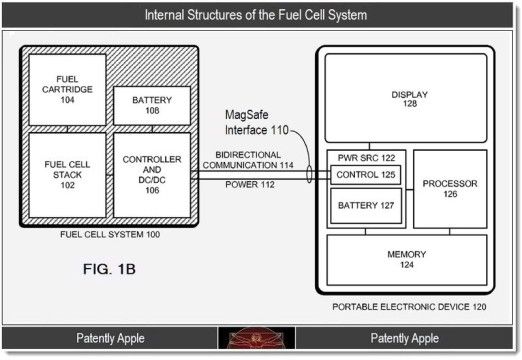 "Such fuel cells and associated fuels can potentially achieve high volumetric and gravimetric energy densities, which can potentially enable continued operation of portable electronic devices for days or even weeks without refuelling"

Apart from hydrogen or hydrocarbons, Apple is also looking into alternative fuel cells technology, such as solid oxide, molten carbonate, direct methanol, and alkaline fuel cells. You can check out more details about the technology in the patent application.

The application cites the following reason for pursuing the technology:

"Our country's continuing reliance on fossil fuels has forced our government to maintain complicated political and military relationships with unstable governments in the Middle East, and has also exposed our coastlines and our citizens to the associated hazards of offshore drilling."