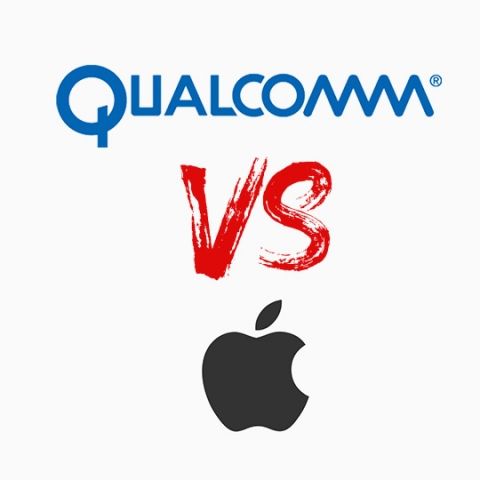 In a sudden turn of events, Apple and Qualcomm have unceremoniously settled their 2-year long legal dispute. The two companies reached an agreement early this morning, and have announced that they will be dropping all litigation worldwide. The news was announced as the first day of the hearing where only Apple had put forward their arguments, and Qualcomm was yet to make their statement. Just a few days ago, reports shed light on the growing hostility between the CEOs of the two companies.

The deal between the two companies will see Apple pay Qualcomm a one-time settlement fee. The fee amount is undisclosed, but Qualcomm had originally claimed that Apple owed it close to $7 billion in royalty. The settlement amount is to settle the royalty dispute. Other terms of the agreement, however, are more positive. Qualcomm and Apple have signed a 6-year license agreement effective April 1, 2019 which includes a 2-year option to extend and a multiyear chipset supply agreement. What this means is that Qualcomm’s modems are coming back to the iPhone.

Since the legal spat began, Apple had stopped using Qualcomm modems and turned wholly to Intel. Intel’s modems were in general perceived as being slightly slower than those by Qualcomm, with Apple slowing down the Qualcomm-based iPhones in the past to match the speed of the Intel variants. With 5G becoming the next big telecommunications technology, Intel had been struggling with their 5G modems and Apple even amplifying efforts to develop modems in-house. With the settlement, we can be assured that Apple will deploy Qualcomm’s 5G modems in the iPhone, which is expected to be around 2020.

Just a few hours after the settlement was announced, Intel announced that they would be exiting the 5G smartphone modem business, instead of turning their focus onto 5G infrastructure. In a press statement published on the company’s website, Intel CEO Bob Swan said that “We are very excited about the opportunity in 5G and the ‘cloudification’ of the network, but in the smartphone modem business it has become apparent that there is no clear path to profitability and positive returns.”

While the two events were announced in the order reported in this story, there is no way to know whether it was Intel exiting the 5G business that prompted Apple to settle with Qualcomm, or whether the settlement caused Intel to take this major step. What is, however clear, is that the modem business was putting unneeded stress on Intel, given that it wasn’t as profitable a revenue stream as the company’s other businesses.

The legal battle between Apple and Qualcomm was expected to turn out to be even bigger than the Apple-Samsung rivalry. Given that the two companies had refused to settle over the last two years, with the matter finally going to court on Tuesday, it was expected that the legal battle would be long and drawn out. A settlement being announced on the very first day of trial is definitely surprising to say the least, but at least it now means that both companies can now work together and bring 5G to the iPhone.