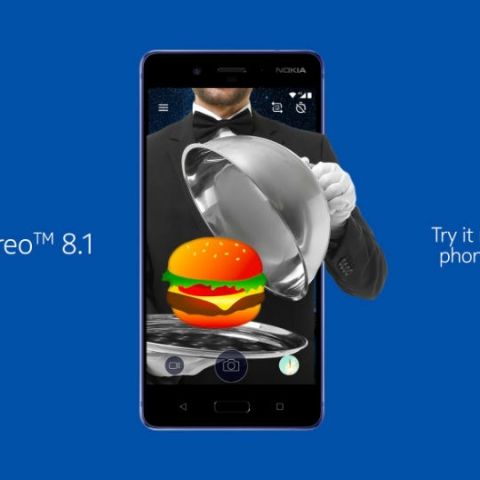 The update to Android 8.1 Oreo is rolling out to beta testers of the Nokia 8, with the cheeseburger emoji fixed.

“Be our guest as we serve #AndroidOreo 8.1 Beta for #Nokia8,” Sarvikas wrote on Twitter. He took a jibe at the controversy that made Sundar Pichai himself step and added, “the hamburger emoji fix with cheese now on top of the patty.”

Be our guest as we serve #AndroidOreo 8.1 beta for #Nokia8 . Updating your device today will enable a host of new features. And most importantly - the hamburger emoji fix with cheese now on top of the patty! Get it here https://t.co/91uhqsbLYM#nokiamobilebetalabs pic.twitter.com/aA4LmSce0E

If you think that’s the only change Android 8.1  will bring to the Nokia 8, think again. Tiny improvements like the battery indicator for Bluetooth devices, safer browsing, and better notifications and fingerprint management and Wi-Fi speed labels will be made available to the flagship phone. Additionally, the update also patches a few bugs that were there in Android 8.0.

The version for the Android 8.1 update is v 4.82A and the size of the update is 1553.9MB. You will have to sign up to the beta program by heading over to the Nokia Phone Beta Labs page and sign up with a Google account. You will require the IMEI number and other details and you will receive the notification to update within hours of registration.

The update to Android 8.0 Oreo rolled out to Nokia 8 users in November 2017. Considering this is the beta rollout for the latest version, a wider launch is imminent in the next few months.

The Nokia 8 is part of the first crop of Android devices with the Nokia moniker that HMD Global resurrected with the promise of pure, stock Android with regular updates. And so far, the phone has managed to live up to the promise, albeit a little late.