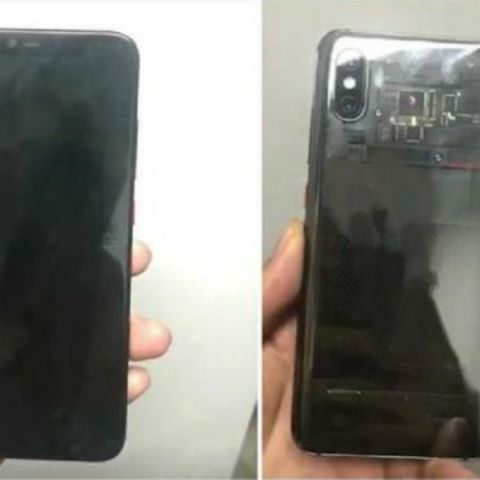 The video shows that the supposed Xiaomi Mi 8 has a transparent back revealing the circuitry inside. It also has a vertical dual-rear camera setup and a wide notch at the front.

It was just yesterday that Xiaomi confirmed it is revealing the Mi 8 at an event on May 31. Now, a video claiming to show off the Mi 8 has surfaced online. The hands-on video of the alleged Mi 8 was posted by Chinese website Sina, and it shows that the phone will feature a translucent back showing the internals of the device, similar to the newly launched HTC U12+.

The hands-on video is barely 15 second long, but it shows the supposed Xiaomi Mi 8 from the front and the rear. We can see that the device features a dual camera setup at the back, with the lack of a fingerprint sensor. After a hint dropped by Xiaomi CEO Lei Jun, it is expected that the 8th anniversary edition phone from Xiaomi will feature an under-display fingerprint sensor, which means that the display will most likely be an OLED. Further, the front of the Mi 8 shows a wide notch at the top and it could house the rumoured 3D depth-sensing modules that the phone is expected to house. The Xiaomi Mi 8 is expected to feature facial recognition, similar to the iPhone X, which could be the reason for the wide notch it sports.

The colour of the alleged Xiaomi Mi 8 showed in the video lies somewhere between black and dark grey, and the reflection on the back suggests the use of glass. This could result in the Mi 8 getting wireless charging. The device is expected to hold a 4,000mAh battery with support for Quick Charging. The Mi 8 is also rumoured to come with a 6.0-inch display, which is pretty much consistent with the device shown in the alleged hands-on video. For its processing needs, the Xiaomi Mi 8 will mostly run on the Snapdragon 845 chipset, given that it is a flagship device.

Additionally, it is speculated that the Mi 8 will run on MIUI 10 based on Android Oreo. It is expected to be made available in 64GB and 128GB storage options, along with a choice of 6GB or 8GB of RAM.