Hewlett Packard has announced that it has now begun fulfilling the Uttar Pradesh State Government contract for the distribution of laptops to students. 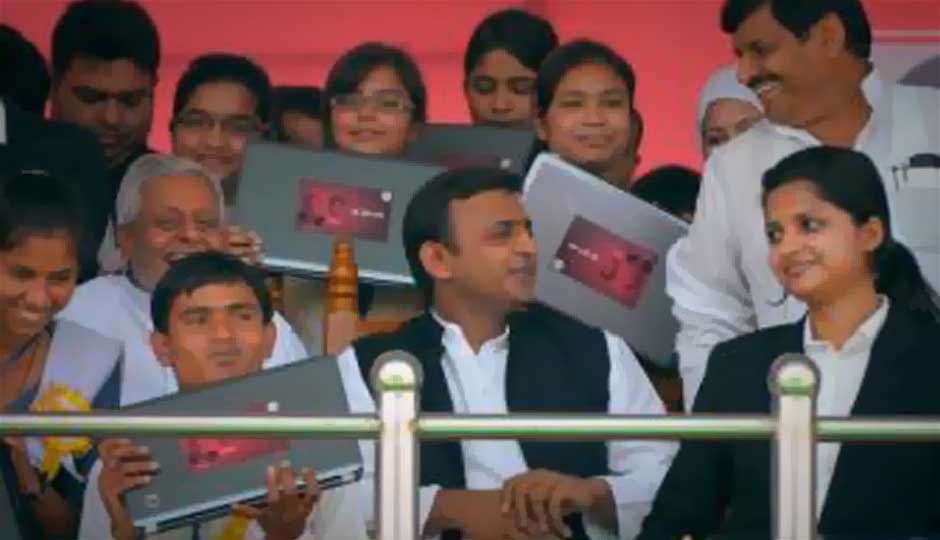 Hewlett Packard (HP) has announced that it has now begun fulfilling the Uttar Pradesh State Government contract for the distribution of laptops to students across various universities across the state. According to the contract details shared, 1.5 million notebooks will be distributed. The first 10,000 HP notebooks were handed out by the Uttar Pradesh Chief Minister, Shri Akhilesh Yadav, at a ceremony held at Colvin Taluqdars’ College in Lucknow on Monday.

On January 28, the UP state government awarded the Rs. 2,800 crore (USD 515 mn approx) contract to HP to supply 1.5 million notebooks over a seven month period.

Rajiv Srivastava, Vice President and General Manager, Printing and Personal Systems Group HP India while lauding the UP government’s ‘vision of delivering technology access to 1.5 million students across the state,’ said, “It’s our privilege to be part of this groundbreaking project which aligns HP’s vision of using technology to change the lives of millions and making it matter for them through education. We truly believe that by empowering students and teachers globally, we can address some of the bigger social challenges around the world. We envision a world with unlimited educational opportunities and believe there is no better way to address society’s most pressing challenges than by equipping students, educators and future entrepreneurs with the skills for turning ideas and ambition into action.”

As part of the contract, HP has said they will be shipping the Pavilion G4 notebooks. These laptops have a 14 inch display, with a resolution of 1024 by 768 pixels. There will be 2 GB of RAM and a 500 GB hard disk capacity. The other features include a webcam, Bluetooth and Wi-Fi support. The Pavilion G4 has three USB ports, HDMI, Media card reader, a port for the microphone jack, a VGA, one headphone or speaker out port apart from the AC power slot, a DVD Read and Write optical drive and support typing in three languages - Hindi, English and Urdu. The laptops will come preloaded with Windows 7 operating system, and the Microsoft Office Pro Academic Version 2010, with the additional option to run the Ubuntu operating system in dual boot mode.

HP will also be setting up a call center in the city of Lucknow, along with service centers at all the 313 tehsils based on the distribution schedule. HP says the service centers will be “fully equipped to provide repair through dedicated and certified team of engineers.” HP has also been directed to maintain a stock of “fast moving spares parts” at all the service centers to ensure faster repair and turnaround time. The performance report will be shared with U. P. Electronics Corporation Limited team on an ongoing basis.