An article detailing Apple's new patent for some wireless computing designs, which can eliminate the need of any wires at all. 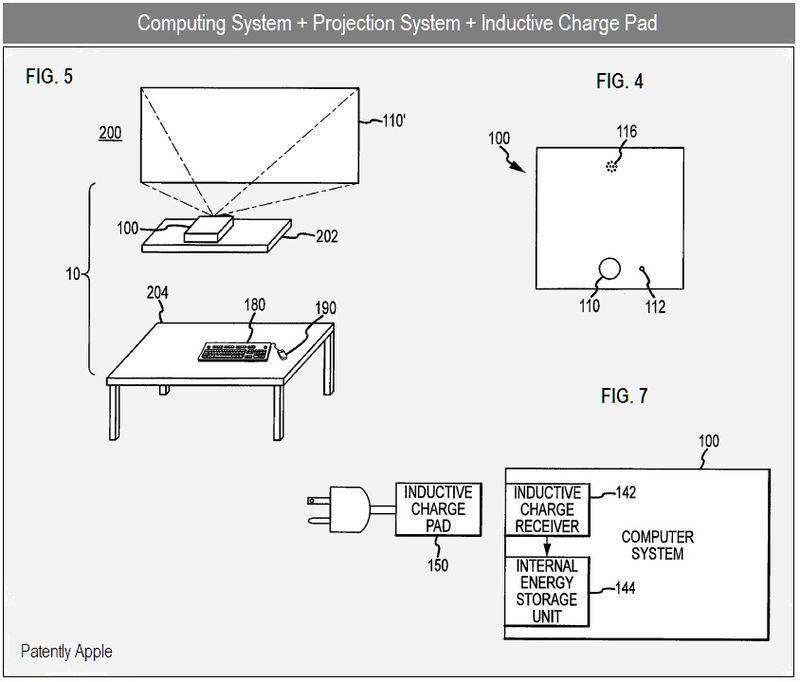 Apple recently submitted a patent to the U.S. Patent & Trade Office for new ideas in wireless computing. Apart from just connecting a keyboard and mouse wirelessly to the CPU, Apple’s new design eliminates the need for an external display, by integrating a projector into the central unit.

This will provide unprecedented flexibility in terms of the location of the image in relation to the user and the computer, and the size of the projected image. The projector will be a ‘smart projector’, which will feature “image processing and/or correction capabilities”. Of course, if a distinct display unit is preferred, it too can be connected wirelessly to the computer. Whatever the primary display device is, secondary displays can also be connected. Speakers can also be connected wirelessly.

Apple’s design has two versions, one where the only wire connected to the computer is the power supply, and the other where it completely removes the requirement of any wire leading to the computer, by detailing a method of wireless power supply called inductive charging.

As patent reads, this might be "an entirely new category of computer system as compared to desktops and laptops", and that "such an approach may allow the computer system to be a desk-free computer".

The wireless interface may use Bluetooth, radio frequency (RF), or infrared (IR) communication, or a variety of other types of wireless communication. It should also be understood that the input devices need not be actual physical devices, but along with sensors, can be virtual or projected input devices (such as a keyboard), or even something like Skinput, Project Natal, or Sixth Sense. Furthermore, Apple intends to provide real-time per pixel and per colour process, to perhaps enable video conferencing.

The patent, applied for in 2010, was originally filed in Q3, 2008. The patent is a combination of various patents filled over the last two years, including the pico projector, smart projector, and inductive charging. Check out the photo gallery below to see some of the new patents.